Our August pick for the PBS NewsHour-New York Times book club, “Now Read This,” is Lesley Nneka Arimah’s debut short story collection “What it Means When a Man Falls From the Sky.” Become a member of the book club by joining our Facebook group, or by signing up to our newsletter. Learn more about the book club here.

Below are questions to help guide your discussions as you read the book over the next month. You can also submit your own questions for Nneka Arimah on our Facebook page, which she will answer on the NewsHour broadcast at the end of the month. 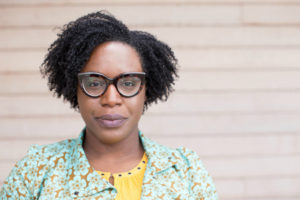 Lesley Nneka Arimah, author of “What It Means When A Man Falls From The Sky.” Credit: Emily Baxter

1. The first story in the collection, “The Future Looks Good,” begins and ends with the same statement, that Ezinma does not see what’s coming behind her. How does this statement both propel the action in the story and reveal the characters’ history?

2. In “War Stories,” does the girl’s father’s war stories parallel her own violence at school? If so, how? What is it he wants her to learn?

3. In “Wild,” Ada and her cousin Chinyere initially greet one another with skepticism but ultimately find a common bond. What is it that brings them together?

4. The story “Light” begins and ends with a father describing the spark in girls that he sees the “wolves of the world” extinguish. What is it he’s talking about? Who takes that spark away?

5. In “Wild,” “Light,” and other stories in this collection the relationships between the mothers and daughters are fraught. What is it the mothers want from their daughters? What role does propriety and rebellion play?

6. Has the girl’s mother really returned from the dead in “Second Chances”? What is the significance of the photograph?

7. In what genre would you put these stories: magical realism, sci-fi, fairytale, folktale, something else?

8. Why do you think Nneka Arimah chose to write “Windfalls,” about a mother who feigns injuries to get money, in the second person?

9. “Who Will Greet You At Home” tells the story of a woman who weaves a baby out of yarn. Do you see echoes of other fairy tales you’ve read? Or other fantastical stories?

10. How does class play a role in the story “Buchi’s Girls”? How does it divide families?

11. In the title story, “What It Means When A Man Falls From The Sky,” society has supposedly figured out “the equation of a person.” But at the end, the main character Nneoma, a so-called “grief worker,” finds the math too vast to calculate. What is Nneka Arimah trying to tell us in this story?

12. In “Glory,” we believe the title character has all the bad luck until we meet Thomas’ mom, and Thomas gives her the ring. What decision do you think she makes in the end? What does this moment say about womanhood and marriage?

13. “What Is A Volcano” reads like a straight folk tale and “Redemption” like gritty realism. Do you enjoy how this collection shifts from one genre to the next?

14. The book’s last paragraph seems to be a kind of thesis statement for Nneka Arimah, who writes that “girls with fire in their bellies will be forced to drink from a well of correction till the flames die out.” But then the main character in the story refuses to be corrected. Why?

15. What themes resonated most for you in these stories? Nneka Arimah’s explorations of family and home? Race and class? Or womanhood and mother-daughter relationships?

16. From the legacy of the Biafran War to the contemporary party scene in Lagos, we get many glimpses into Nigeria in this collection. What did you learn about the country’s past, present, and even imagined future?

Left: "What It Means When a Man Falls From The Sky," by Lesley Nneka Arimah. Credit: Riverhead Books