‘Don’t be such a writer,’ and more advice from author Sandeep Jauhar

Our January pick for the PBS NewsHour-New York Times book club, “Now Read This,” is Sandeep Jauhar’s “Heart: A History.” Become a member of the book club by joining our Facebook group, or by signing up to our newsletter. Learn more about the book club here and see all the previous book club selections here. 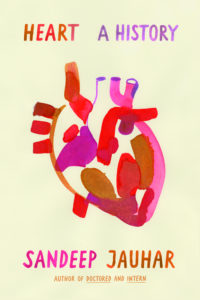 Sandeep Jauhar’s day job is not as a writer, but a busy cardiologist and the director of the Heart Failure Program at Long Island Jewish Medical Center in New York. He’s managed to squeeze in three hit books — the latest of which is “Heart” — by writing when he can, including taping sections of his first book on his commute.

Below, read more writing advice from the author, including the counterintuitive but useful guidance: “Don’t be such a writer!” Jauhar says he received this advice from a New York Times editor after the writing he turned in was full of adverbs and forced symbolism. He learned it was sometimes better to get out the way and let the story tell itself.

When I signed my first book contract with FSG, my editor offered this bit of advice: Write every day. I have tried (with varying degrees of success) to follow this recommendation ever since.

Of course, ordinary life can make this challenging. So I write whenever I can: if an office appointment is cancelled, for example, or in the morning, before the steamroller of hospitals work gathers its full momentum. I actually wrote a lot of my first book, “Intern: A Doctor’s Initiation,” in my car, taping it while I drove from Manhattan to Long Island. I much prefer to write in the morning. Evenings I have a longstanding date with my 10-year-old to watch old episodes of “The Office.”

2. What is one book you think everyone should read?

So many books! And of course every person is different, so it’s hard to pick just one book for everyone. But there are a certain, few books that are very special to me. In this age of physician burnout and fraying doctor-patient relationships, I think every doctor (and patient) should read “A Fortunate Man” by John Berger. It is a touching and beautiful book about the work of John Sassall, an extraordinarily committed English country doctor with a tremendous appetite to experience all that his patients’ lives have to offer, in disease and in health. It is a meditation on what it means to be a good doctor, the ambiguities inherent in medical practice, the nature of empathy, and the fallibility of the medical practitioner.

For readers who enjoy science books, I recommend “The Periodic Table” by Primo Levi. It is about science, of course, but also about Levi’s internment in Auschwitz, his life as a chemist, and the nature of matter, combining philosophy, autobiography, political thought, even fiction, into a seamless braid to show how truly great science writing can be in the hands of a master.

And finally, for every American, let me suggest “All the King’s Men,” a novel of mesmerizing depth and beauty about corrupt politics and original sin and perhaps a much-needed wake-up call in these strange political times.

I wish more people knew about “Stop-Time” by Frank Conroy. There is no other book more dog-eared on my bookshelf. It’s a sad and wonderful book, written without a sentence of self-pity, about a sensitive young man’s coming-of-age. It is the quintessential memoir of childhood and young adulthood, written almost two decades before Tobias Wolff’s “This Boy’s Life” (another of my favorites). If you want to learn how to write memoir, read “Stop-Time.” When I first met Paul Elie, my editor for “Intern,” he began to narrate the prologue of “Stop-Time,” in which Conroy writes of barreling through the English countryside in a Jaguar, “my brain finally clean and white, washed out by the danger and the roar of the wind,” and I thought, “I have found my editor!”

“Don’t be such a writer!” This is advice Cornelia Dean, the science editor at The New York Times, gave to me after I submitted my first column in 1998 about a patient with ICU psychosis, a mysterious type of delirium in intensive care units. My first draft was loaded with forced symbolism, disjointed metaphors, too many adverbs: It was awful! Cory’s advice was to let the story tell itself and get out of the way. This counsel has served me well, especially while writing my latest book. There is so much natural drama in the history of the human heart: doctors experimenting on themselves and small children, patients deciding to go first with unproven treatments; it is a story that doesn’t require a lot of “writing.”

In some sense, I’d been wanting to write “Heart: A History” most of my adult life. My family has a malignant history of heart disease. My paternal grandfather died of a heart attack in his early 50s, while he was having lunch with my father, who was only thirteen. Like many who have witnessed the sudden death of a loved one, my father never really got over it. (Later, my maternal grandfather also died of a heart attack, and so, too, eventually, did my mother.) A pale sort of grief shrouded our home for most of my childhood. I grew up with a fear of the heart as the executioner of men in the prime of their lives.

The decision to start writing the book came several years ago when I was 45 and discovered through a CT scan that I too have the beginnings of coronary artery disease. Given my family’s history, the result seemed almost fated. The book is for readers, like me, who are fascinated and mystified (and perhaps also terrified) by the heart, the organ, more than any other, that begins and ends our lives.

The beauty of science is that it’s never finished, so in some sense the stopping point for the book was arbitrary. I’d covered most of the great advances, and it seemed a good place to reflect on how far we’ve come and what to expect in the future. Cardiology is one of the great success stories in 20th century medicine. But can we really expect the same degree of progress going forward? Of course, there will continue to be technological innovations, but to continue to make the kind of progress to which we have become accustomed we must begin to view our hearts not just as machines to be manipulated but also as canvasses for our emotional lives.