Not everyone’s sold on Seuss

The wildly popular books of Dr. Seuss have sold more than 650 million copies in 95 countries. They claim permanent spinner displays in book stores. And many parents believe that his playful misuse of language helps young kids wrap their mouths around words.

But not everyone’s sold on Seuss. 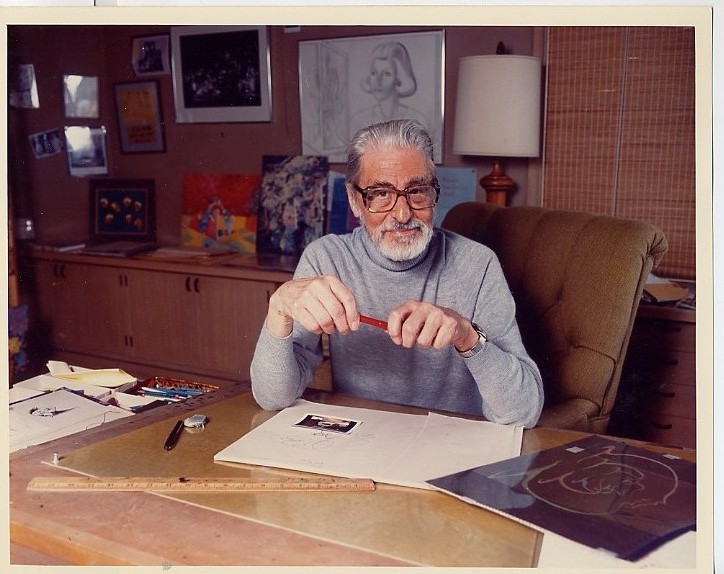 Amid the adoration is a small but vocal group of parents who take issue with the author’s use of nonsensical language.

There’s Jennifer Graham, who once took to The National Review as a frustrated mom.

“I always thought the point of reading to children was to teach them about language,” she writes. “How does Dr. Seuss help? Heck, he knew so few words that he had to make most of his up.”

She writes about losing it while reading Seuss to a group of children: “‘I DON’T KNOW WHAT A TRUFFULA TREE IS!’ I shriek. ‘I don’t know what any of this stuff is!'”

There’s Amy Mascott, a state-certified reading specialist in Maryland, who wrote a blog post two years ago that began with a confession: “I don’t love Dr. Seuss. I don’t, and I haven’t, and I won’t. So there. I said it.”

And there’s this commenter from a online Goodreads discussion. “Is Dr. Seuss good for kids? He makes up words. Then when my kids start making up words I have to be the bad guy and shoot them down.”

Indeed, page after page, Seuss’s stories are filled with rhyming tongue twisters and nonsense words — like Nerkles or wockets in pockets or Floob-Boober-Bab-Boober-Bubs. Consider, for example, this line from “Fox in Socks”: “THIS is what they call a tweetle beetle noodle poodle bottled paddled muddled duddled fuddled wuddled fox in socks, sir!” 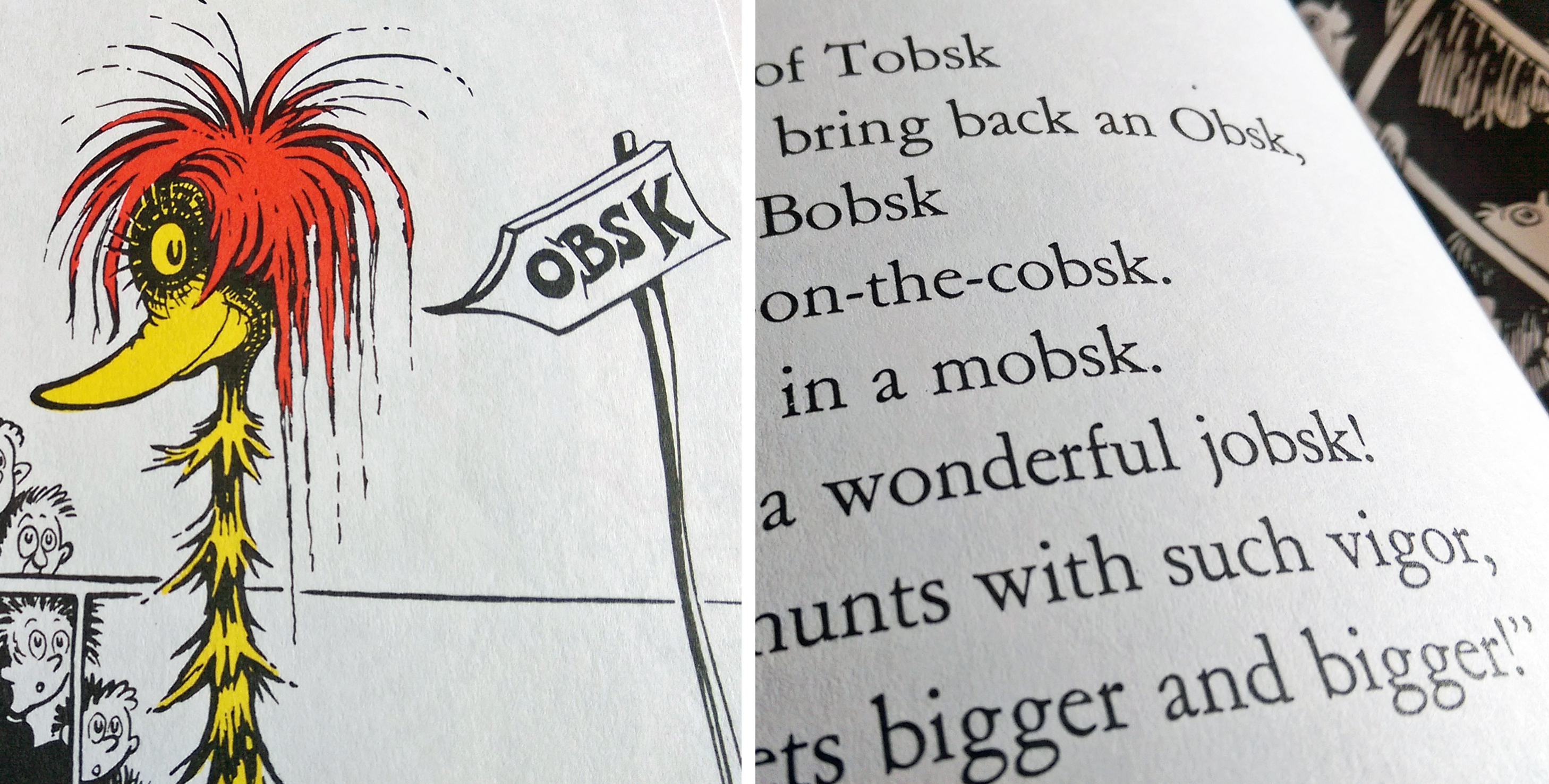 Pages from 1950’s “If I Ran the Zoo.” Photo by Joshua Barajas/PBS NewsHour

Parents’ concerns over Seuss’s use of language are “legitimate,” said Amanda P. Goodwin, an assistant professor in language, literacy and culture at Vanderbilt University. “It comes from the heart. It comes from wanting their kids to do really well.”

“The more parents talk about the story with the kid, the better their literacy development,” she said. “It’s not just about reading from the beginning to the end.”

Seuss ends that book, which features the mother asking her kids about their day after the Cat unleashed chaos on the house, with a question: “Well … what would YOU do if your mother asked YOU?”

“Kids understand that fairy tales are fairy tales,” Goodwin said. “Kids know you’re not supposed to color on the walls.” A story’s fantastical elements can help foster a dialogue between the parent reading to the child, especially about moments that don’t “align with our morals or our traditions or culture,” she said. 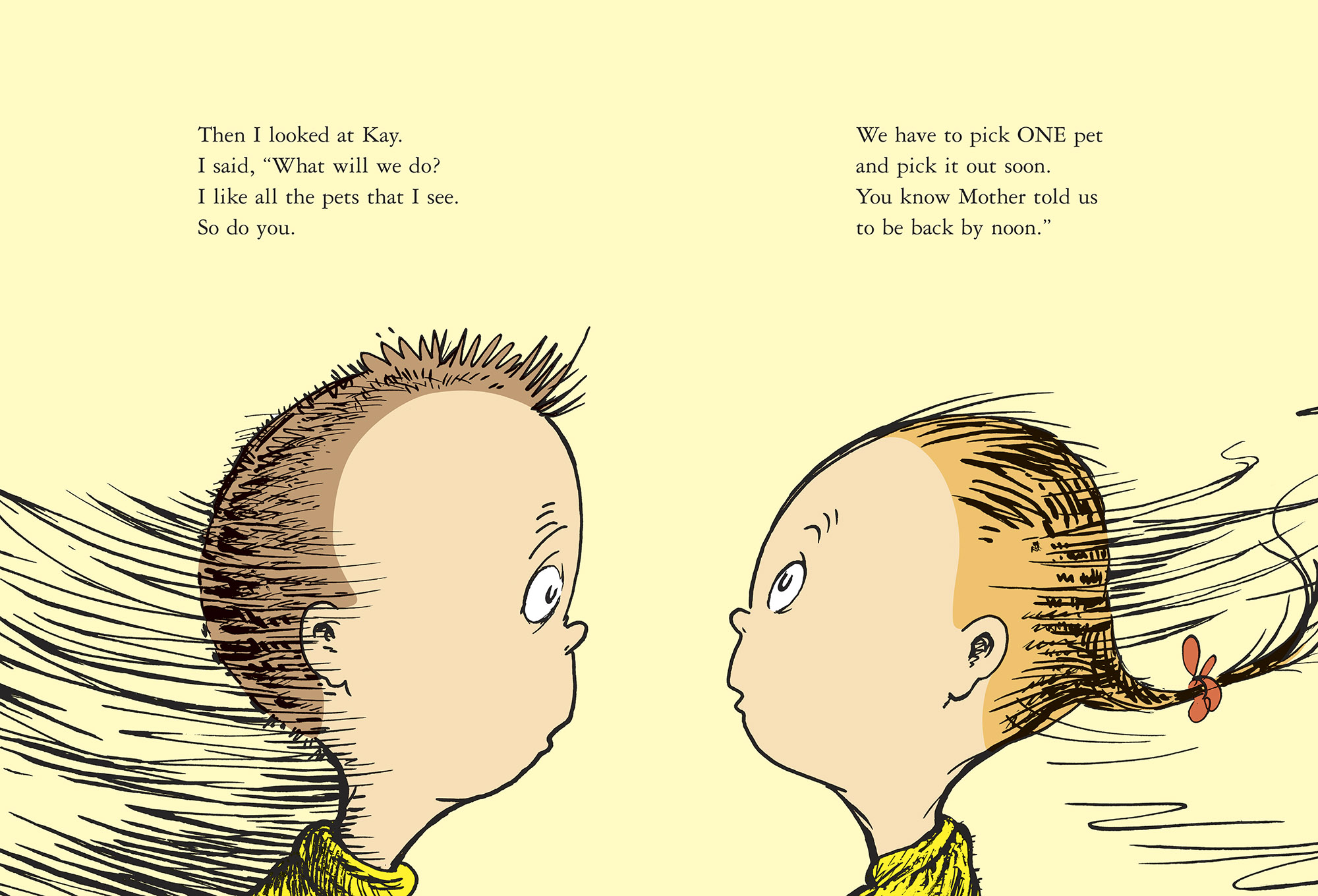 An excerpt from “What Pet Should I Get?” released Tuesday, 25 years since the publication of Seuss’s last book, “Oh, the Places You’ll Go!” Image courtesy of Dr. Seuss Enterprises

Still, why use words in a children’s book not recognized by spellcheck at a time when language development is so central to their education?

In “If I Ran the Zoo,” Seuss rhymes “Tobsk” with “Obsk” and a “Thing-a-ma-Bobsk” with a “corn-on-the-cobsk” and “mobsk.” Such sounds help children understand that English is an alphabetic language that uses letters to map sound.

Seuss took that idea a step further by creating an entirely new alphabet in “On Beyond Zebra!”, which is filled with symbols more complicated than a simple downstroke of the letter “I.”

“My alphabet starts with this letter called YUZZ.
It’s the letter I use to spell YUZZ-a-ma-TUZZ.
You’ll be sort of surprised what there is to be found
Once you go beyond Z and start poking around!”

“We take the alphabet for granted, a ‘natural system’ that allows us to form the words we use to make sense of the world,” Philip Nel wrote in “Dr. Seuss: An American Icon.”“‘On Beyond Zebra!’ challenges this basic assumption by suggesting that the building blocks of language are but an arbitrary pattern of symbols,” he wrote.

“For someone who’s acquiring language, that’s a revelation,” Nel told the NewsHour. “When you think about your first encounter with the alphabet, a lot of rules don’t make any sense at all.”

“Zebra” also ends with a question to the reader. The most complicated symbol yet appears in red next to: “What do YOU think we should call this one, anyhow?” 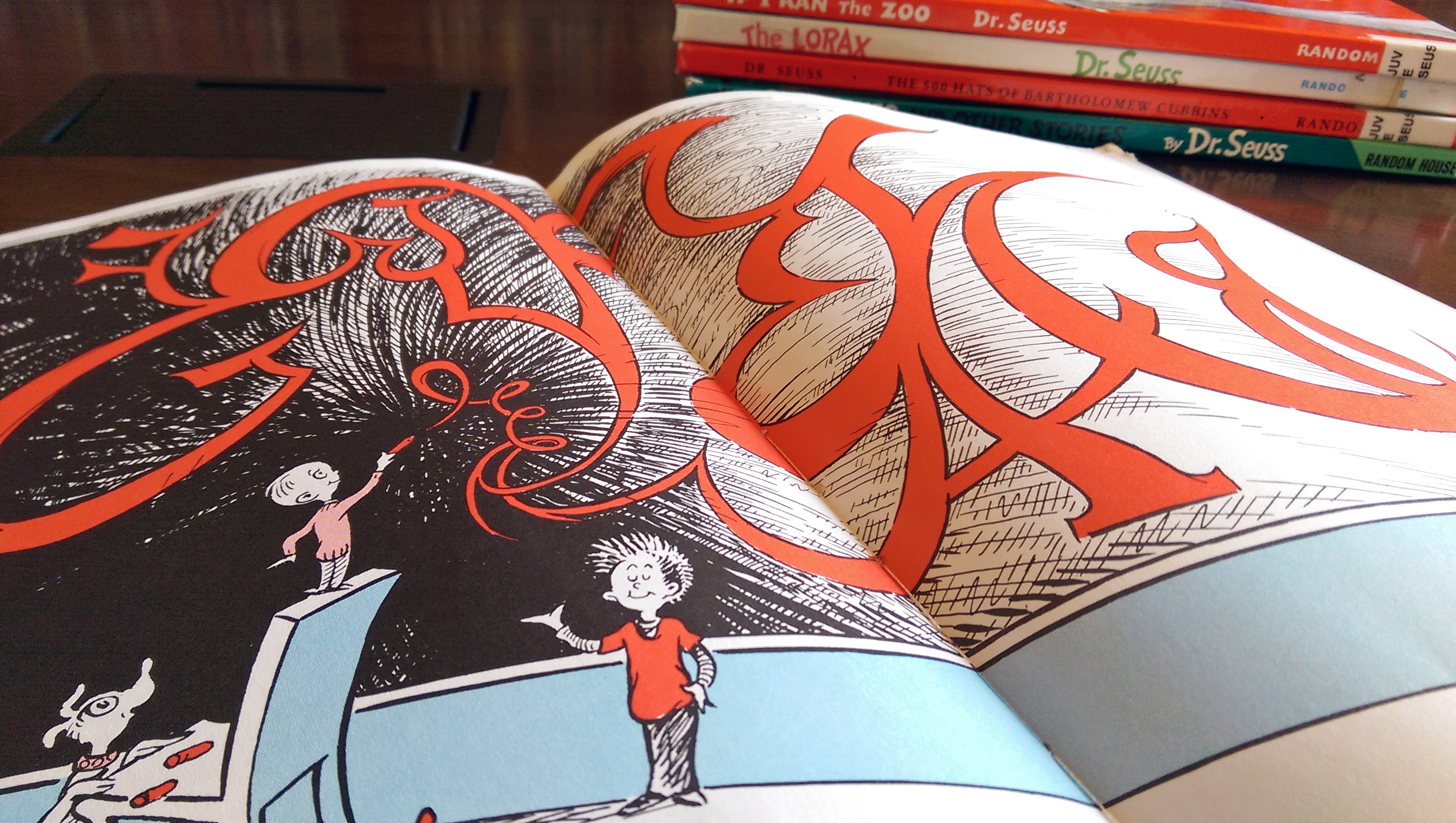 Pages from 1955’s “On Beyond Zebra.” Photo by Joshua Barajas/PBS NewsHour

“Part of language acquisition is learning to play with it,” Nel said.

“Green Eggs and Ham,” Seuss’s most popular book, was written with only 50 words chosen for a beginner reader. In the book, Seuss uses simple words to build the main character’s name, Sam-I-Am.

Wordplay, too, helps children understand the rules of syntax, Goodwin said. Nonsensical words can shed light on real words. “You lack that in a traditional rhyming book,” she said.

Perhaps most importantly, the silliness motivates children to read, Goodwin said. And decades of research shows that the more children read, the better the literacy outcomes are, she said. 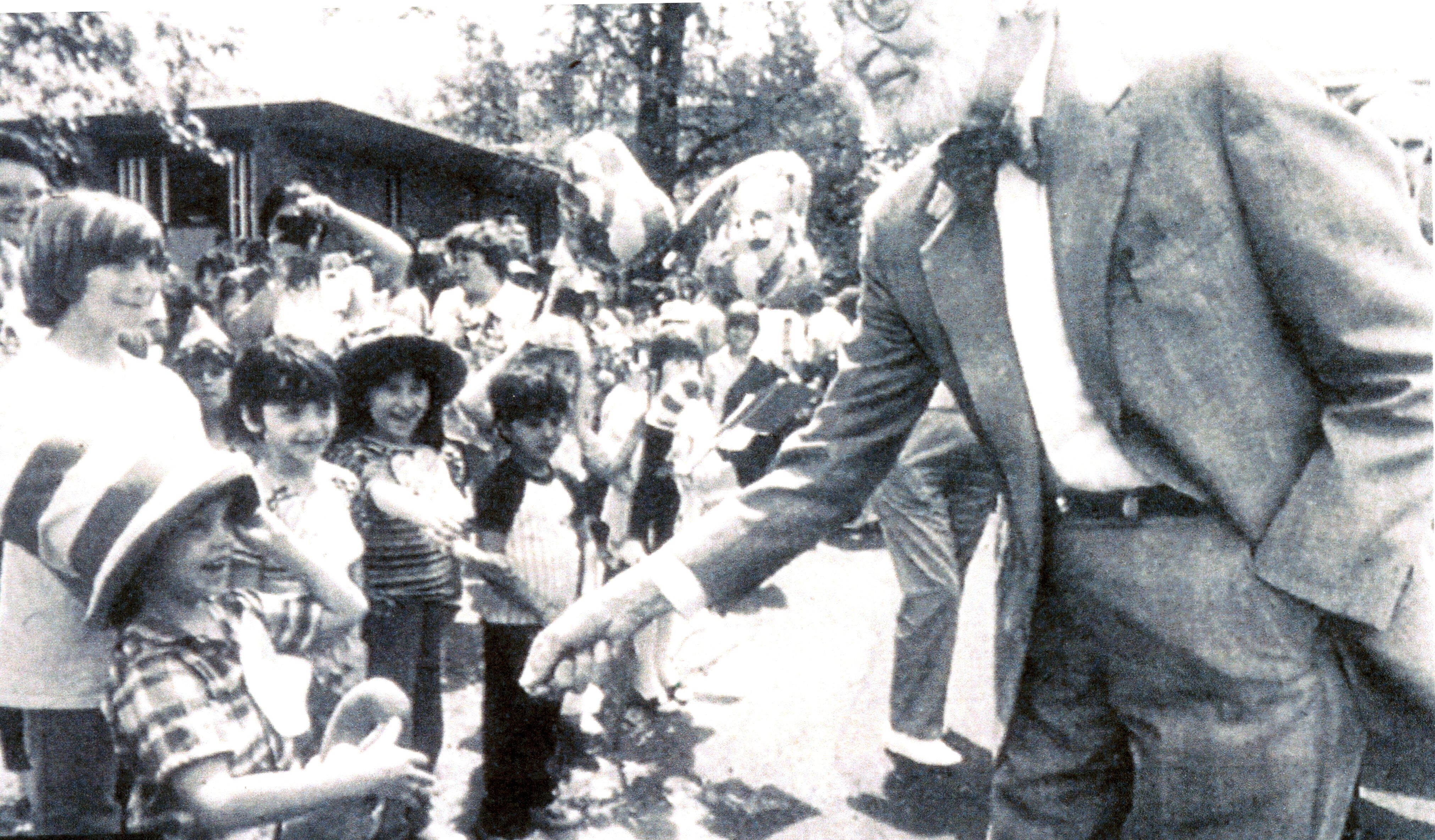 “I personally do not care to read a story full of nonsense words to my kids only to close the book and have no clear sense about what I read, with no actual story to show for it,” she wrote in an email to the NewsHour.

Mascott said books like “My Truck Is Stuck” and “Barnyard Dance” are better alternatives to Seuss and aren’t mired in tricky wordplay. Others like “The Butt Book” and “Knuffle Bunny” are also preferable because they are “kind of silly without being completely nonsensical.”

A mother of three and a former high school English teacher, Mascott said Seuss is still a part of her children’s book collection; she owns three copies of “Oh, the Places You’ll Go,” which were gifts.

Left: Children listen as Dr. Seuss books are read during "Read Across America Day" in New York on March 2, 2007. Photo by Lucas Jackson/Reuters