Between the rushing taxi cabs and the construction cranes that cast shadows along red brick apartments, it’s easy to forget about the growing displacement of Brooklyn residents.

But “Deconstruction,” a new series of paintings by Patrick Eug‎éne, unveils the effects of gentrification within East New York, a Brooklyn neighborhood where he grew up and still lives. The series, a display of abstract expressionism, highlights the removal of residents through indefinite shapes and intense color. 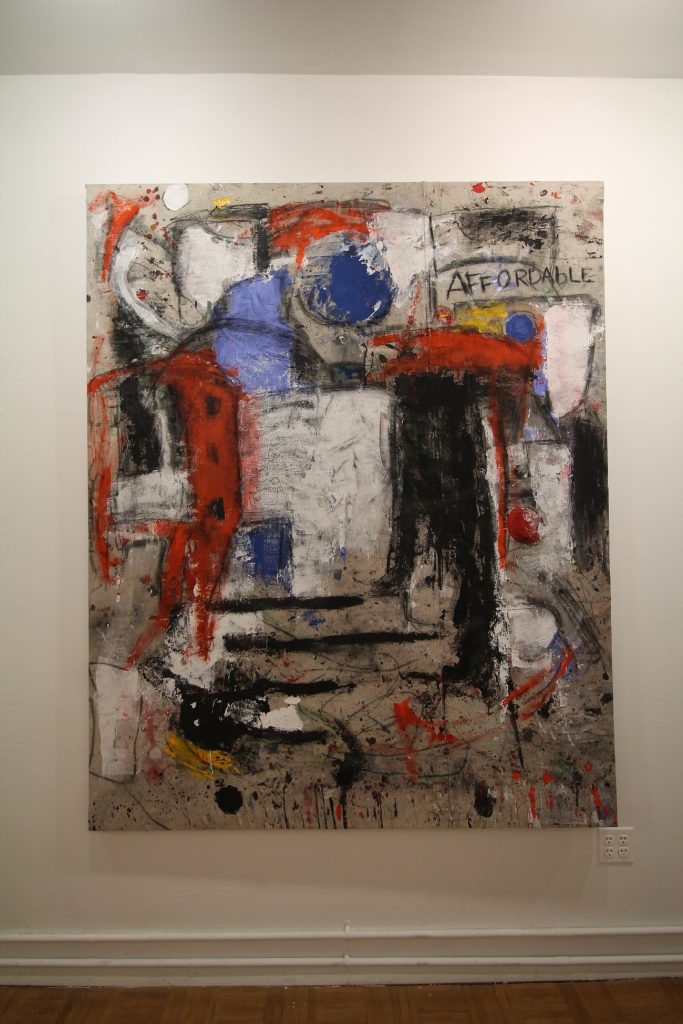 At first glance, “Affordable” shows the viewer striking red specks along the canvas that merge into a traffic light box. The outlines of black come forth as harsh as rezoning plans for some city residents. But among the clashing swipes of red and blue, the word “Affordable” is unmistakable.

Every day, close-knit communities of Caribbean immigrants in Brooklyn grow smaller amid the construction of high-rise buildings and house renovations. Developers in East New York are buying up cheap homes and selling them at increased prices, a venture known as “house flipping.”

More homes were flipped in East New York in 2015 than any other neighborhood in New York City, according to the nonprofit organization Center for NYC Neighborhoods. That same year, 94 homes were sold for an average of $215,000 each. Within a year, they had resold for three times that price.

And when new, affluent residents and increased property values appear, original residents do not seem to fit into the mold like they once did.

We asked Eug‎éne what “Deconstruction” shows about race and society, and how it could help open dialogue between the participants of gentrification and those it has affected.

Why did you choose to focus on gentrification?

I think being in New York, Brooklyn, we’re surrounded by it in a daily basis. In the back of our minds, we all see and understand what is going on. Some call East New York the “last frontier.” It’s pretty much one of the last areas in Brooklyn that have not fell into this whole gentrification thing. It’s a vicious cycle. It’s something that we’ve seen in other parts of Brooklyn. No one ever imagined it to happen in East New York. So people said, “Never East New York. It’ll never happen to East New York” but it’s happening. So now, people are like, “What do we do now? We were pushed out of Bed Stuy, pushed out of Bushwick. We’re in East New York, and now where do we go?”

It’s tough. That’s what drove me to do this series. Whether you like poetry or journalism, it’s something that touches you dearly. Being that I was affected by it, and just seeing people around me being affected by it, I felt like it was my duty to paint a series about them.

Why did you choose abstract expressionism?

I actually started off doing more figurative work. But to me, I just wasn’t feeling as loose and free with it [as] I feel like you should be when you’re creating something that you love. It was, to me, a little bit more contrived. I took a lot of time trying to make an eye look like it was the right way, and it was really technically. I would try to teach myself while doing these techniques. I just broke free from all of that, and I gained the confidence to do what I want to do rather than try to please others, or get validation. But then I said, I really love this. I think I wanna do this forever.

If someone is looking at something that is not as recognizable, everyday object, and still feel something from it, then you’ve created something. In my opinion, you look at something and you may not be able to identify what you’re looking at. But you still say “Hey, this is nice.” To me, that’s magical. To me, being able to construct something that evokes emotion out of nothing, in a sense, is where it’s at. I think that’s what expressionism is. If things line up correctly, it makes a beautiful piece and evokes beautiful emotion. 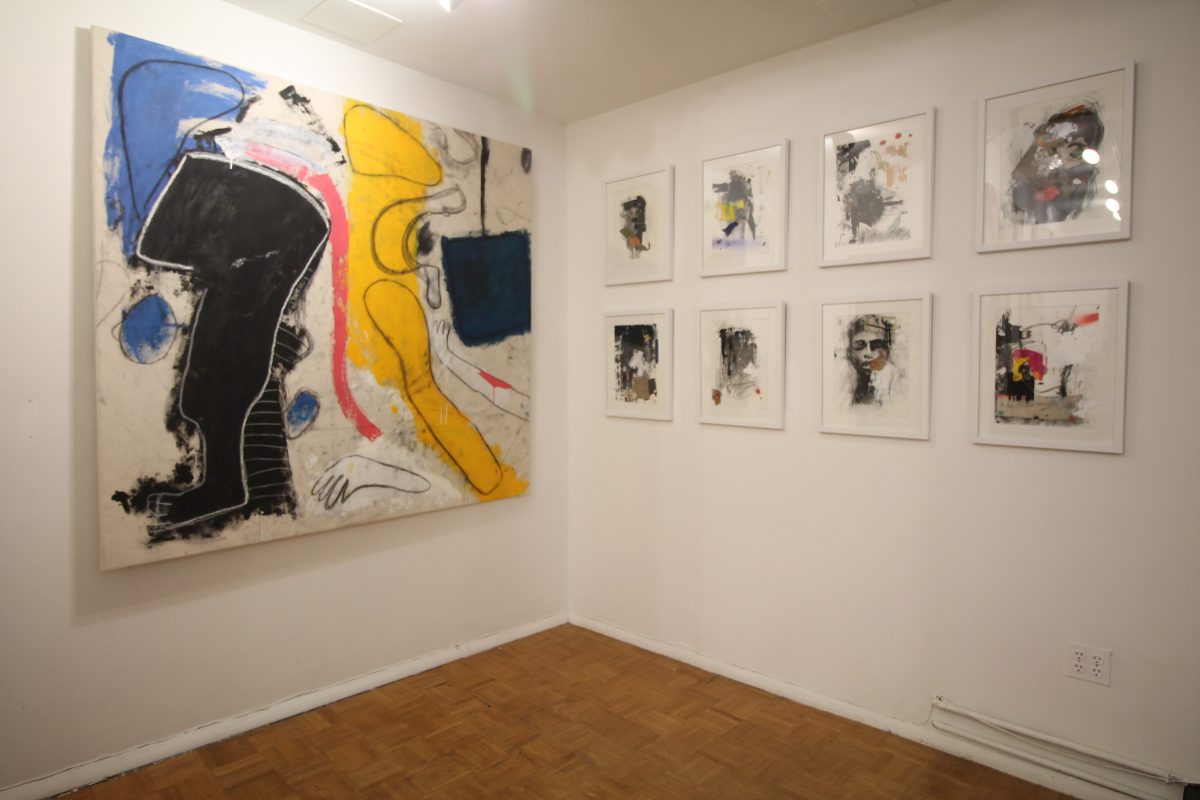 Was there a specific moment when you realized that your home, East New York, was not the same?

Over the years, it started to progress. The violence is down, things have gotten a lot better. It’s come far from where I was. Now that developers feel like East New York is a bit safer, they feel like it’s a good time to move on in. And it’s at the expense of people who have been there for a long time.

When I say that, I’m referring to the methods they use to force people out of their homes. To me, it’s a brutal method. Say its an elderly woman or elderly couple who owns the home. They’ll target elderly women that may not have young men around to kind of help them out when a man comes knocking on the door and offers this much cash for their home. They kind of pressure them. The elderly woman may feel vulnerable … it’s a terrible method. It doesn’t matter how long you’ve been there — 10 years, 15 years, 20 years — none of that matters to these people. Because money speaks louder than anything else.

My grandmother recently brought in a young mother and her two children who were forced out of their building. She brought them into her building way below market rate because she understood the woman’s struggle. If it weren’t for people in the community that were doing that for each other, I don’t know where half of these people would go. 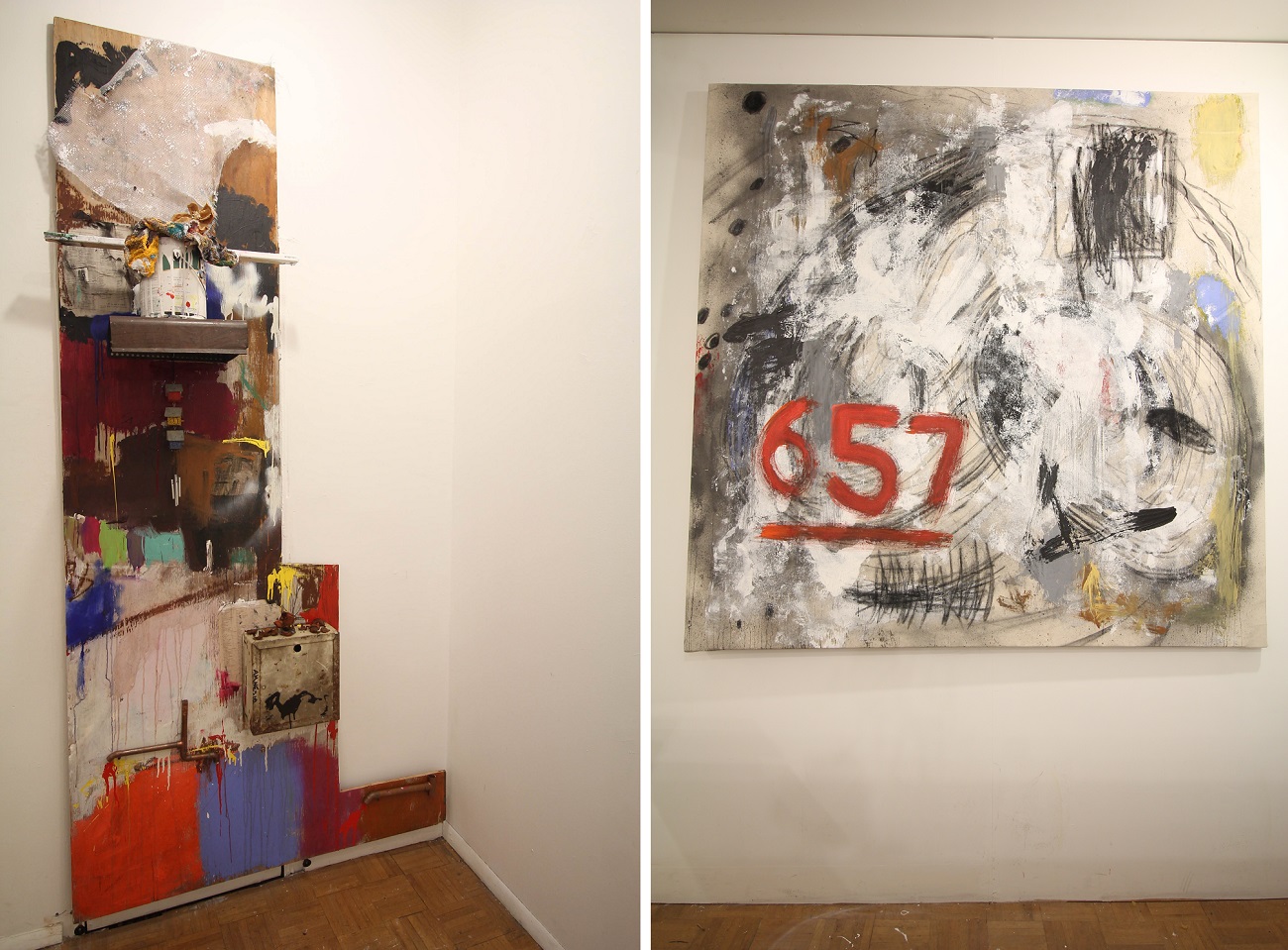 What do people usually forget when it comes to gentrification?

We tend to forget our older people in the community. There was a garden in East New York Brooklyn that was shut down. The garden was a community garden of mostly seniors and elderly people. That’s where they found their joy. And they’re looking to build on that property. My piece, “Sorry I Stole Your Garden,” is dedicated to them.

We tend to forget their needs. So when you take away their garden, you’re undervaluing what they feel is valuable. Why forget about them when they’ve been here forever? They’ve pretty much created this community. 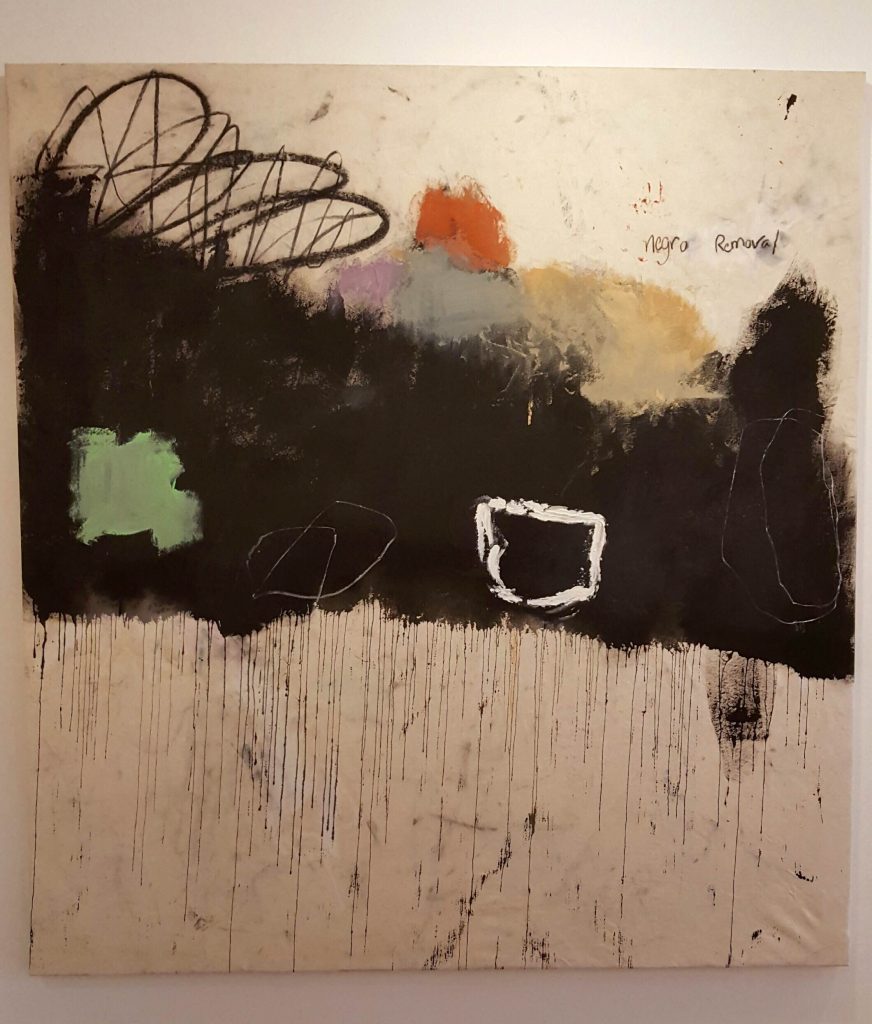 I see you have a piece that shows the phrase “Negro Removal.” What is the meaning behind this?

I was at this discussion about gentrification, and the speaker refused to use any other word other than “Negro removal” instead of using “gentrification” and “displacement.” Now [developers] are going to colonize this place.

That piece has a lot of elements to it in the abstract form. So I thought to myself, “Why not just hit em with that word there, so they can at least understand what is going on?” There’s a play with the colors, there’s a play with the shapes. To me, the blackness, the pain, the suffering, the tears, the sweat, the blood dripping down. I kind of separated the green to show what’s more important than anything going on — it symbolizes money.

What do you hope to come out of this series?

Even though this — gentrification — is becoming a discussion, I just hope that we can start hearing the stories of people that are actually being affected by this. To me, it’s a crime. This is just my view of it, this is just my opinion, these are just my emotions, but I am not that woman who has the two children that can’t find a place to live. When are we going to start listening to the actual people that are being affected, and hearing them out?

I felt that because of my platform as an artist, it’s something that I should use to express my personal emotional connection to what’s going on in Brooklyn. To me, I feel like we should get ahead of it before it actually happens and talk about it.

This interview has been condensed and edited for clarity.

Left: Patrick Eug‎éne appears in front of his work at "Deconstruction," a show at the Brooklyn Arts Fellowship in Brooklyn, New York. Photo courtesy of Patrick Eug‎éne