The joy of going to school in post-Ebola Sierra Leone

Spending time in public spaces is a privilege that many of us take for granted. During a catastrophe, people lose the ability to congregate for long periods of hours or days. In the case of Sierra Leone and other Ebola-affected countries, that time frame extended to months and years.

After such a protracted period of isolation, when the time finally came to re-enter the public space, the importance of engaging with one another became that much more salient to people.

When I took these photos, I was working on a photographic assignment for the We Yone Child Foundation, during a two-week photographic seminar with Momenta Workshops in Freetown, Sierra Leone. My assignment was to document two schools We Yone had funded, built and staffed in two different communities within Freetown. In the wake of the Ebola epidemic, the schools had been struggling to muster adequate teaching supplies and staff to accommodate the approximately 300 K-12 students, many of whom now orphaned by Ebola, who wanted to attend classes.

My first few days in the classroom, I was fixated on trying to visually capture the paucity of educational resources — scant paper, shared pencils, no electricity or ventilation, and creaky, battered benches substituting for desks and chairs. But it soon became apparent that the prevailing experience every day in those classrooms for both students and teachers was one of joy — the joy of coming to school, coming to work, and most of all, the joy of learning and being in the company of others.

I spent my third day in Freetown photographing the students and teachers in a classroom at the George Brook School. The room was large and open, without walls, lit only by the ambient light falling through some small windows, and packed with benches that had been divided into four different “grades,” each led by its own teacher. In one of the classes, situated in a dark far corner of the room, the students were out of their seats, clustered around their teacher.

The teacher’s energy was boundless. She was animated, constantly moving, and totally engaged with her pupils. As I drew closer and began to photograph her, I saw she was teaching while carrying a one-year old child on her back, her son. He remained on her back, as curious and alert as the students in front of him, for the duration of the three-hour morning class. 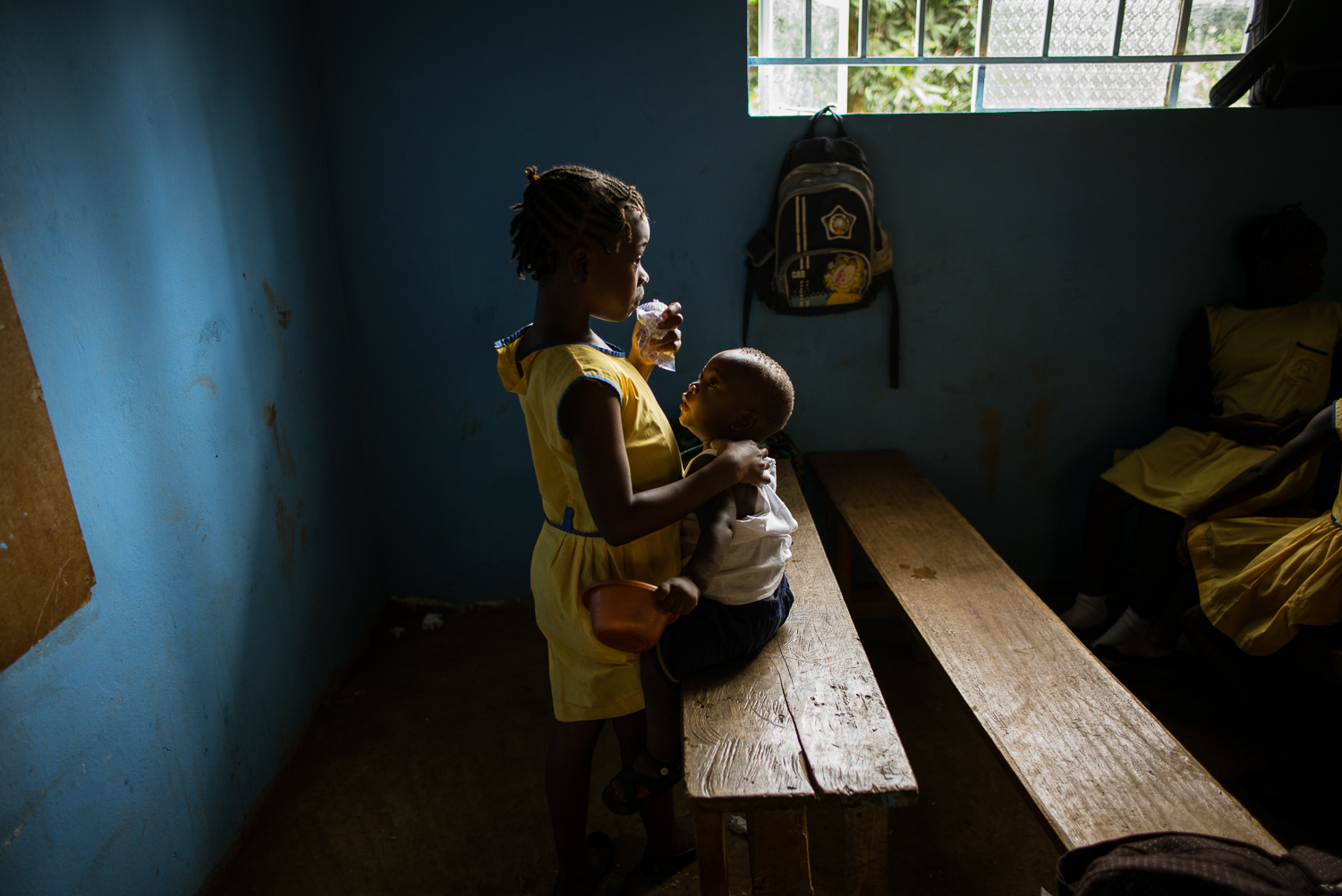 A student cares for teacher Edna Boyle’s 1-year-old son while “Auntie Edna” supervises students outside during recess. Photo by Sara May

Later, while the students were out at recess, I came back to the classroom and found a student sharing her water and lunch with the boy, while the teacher, “Auntie Edna,” supervised the rest of the students outside. I watched the two of them for awhile, and it was clear the boy had absolute trust in his lunch companion, not once looking for his mother. I found a beautiful symmetry here between a teacher who cares so much about the welfare of her students that she will hike to school and teach five days a week carrying her toddler on her back, and the students who care so much for the welfare of their teacher that they are there to care for her son in the moments when she cannot.

As my work branched out from the classrooms and I spent more time in the community, I noticed a spirit of irrepressible optimism and energy everywhere I went. Watching people resume their everyday lives as Ebola waned, I could see that public spaces had become instrumental to enabling individuals to leverage their experiences into empathy for one another while rebuilding communal bonds.

See more of May’s work from the series below. 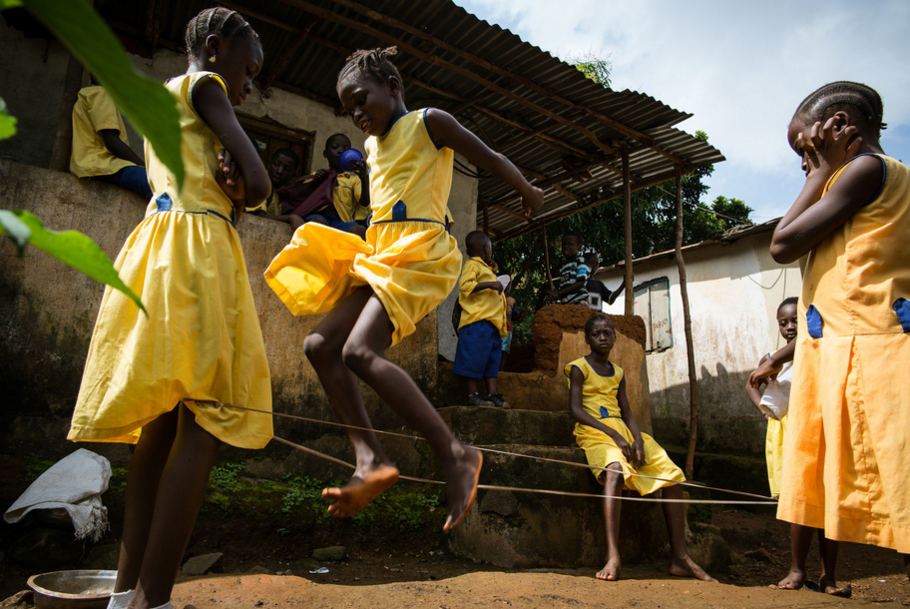 Students jump rope during recess at the We Yone School in George Brook, Freetown, Sierra Leone. Photo by Sara May 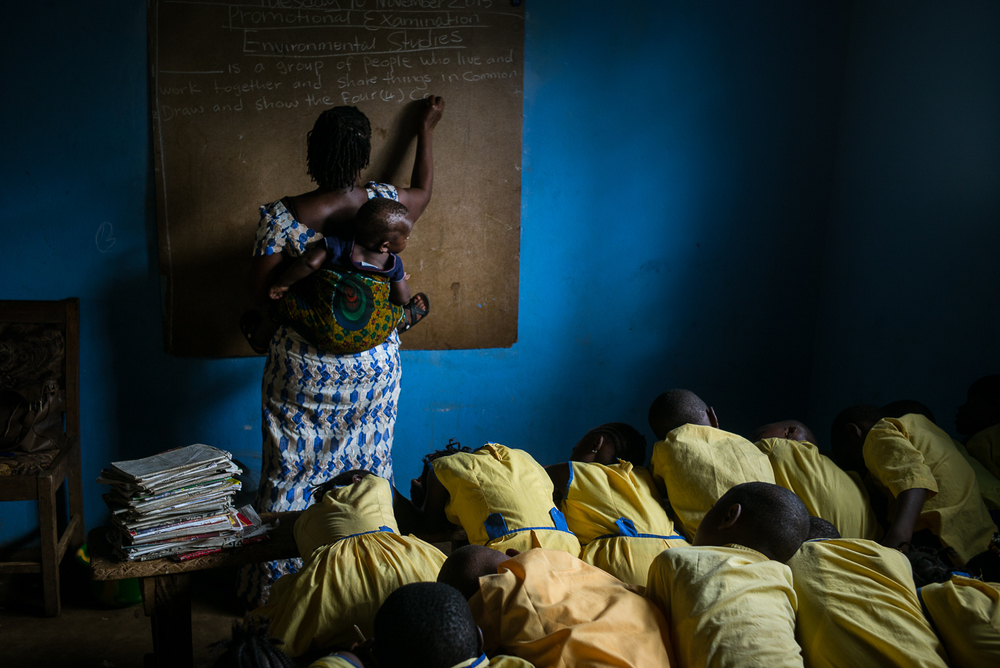 Edna Boyle teaches at the We Yone school in George Brook, Freetown, Sierra Leone. Photo by Sara May 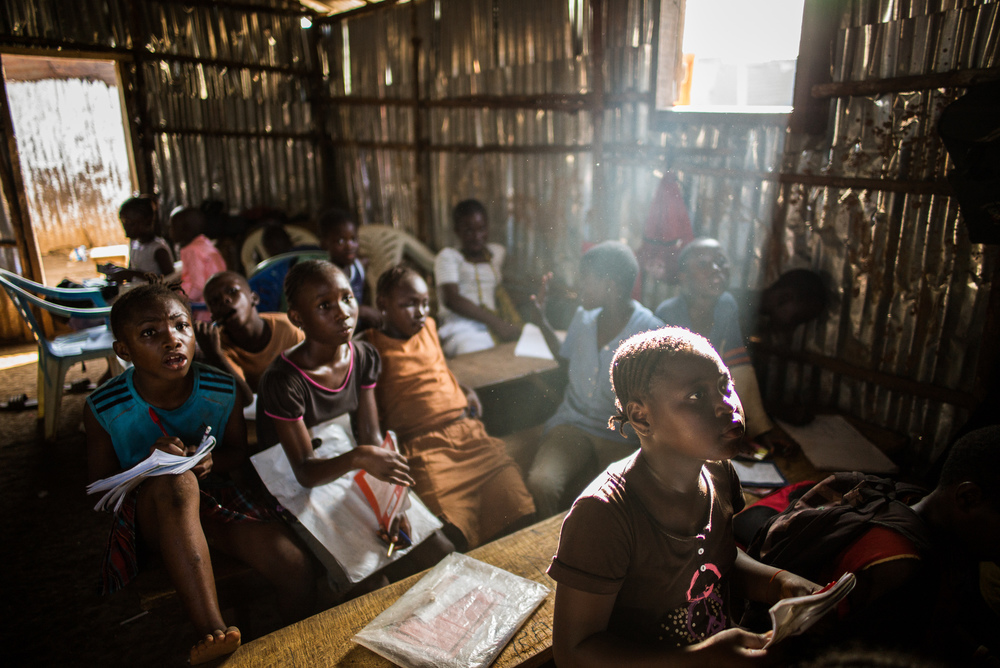 Students sit in a classroom at the We Yone school in Kroo Bay, Freetown, Sierra Leone. Photo by Sara May 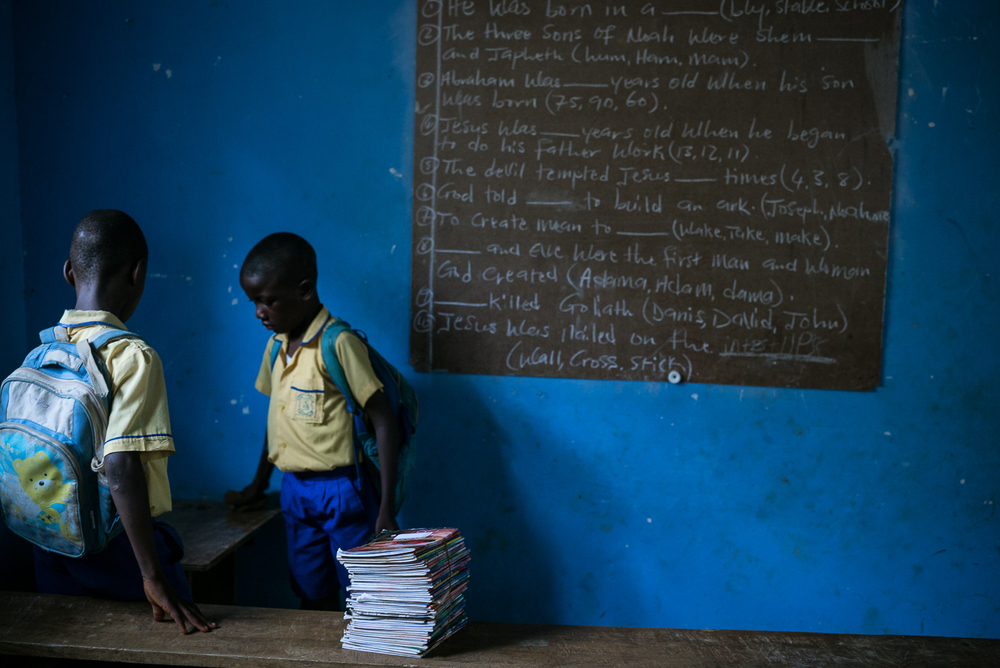 Two students hand out composition books for an exam at the We Yone school in George Brook, Freetown, Sierra Leone. Photo by Sara May

Left: Every day is bring your child to work day for teacher Edna Boyle, who teaches primary school students at the We Yone school in the George Brook neighborhood of Freetown, Sierra Leone. Photo by Sara May