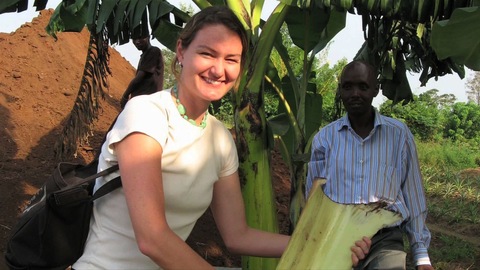 Harvard Business School and Kennedy School of Government graduate Elizabeth Scharpf, 35, appears confident with a warm smile. These attributes no doubt come in handy when Scharpf travels the world to raise awareness about a subject that most people don’t often discuss: menstruation.

Specifically, she discusses the challenges that women and girls face in low income countries when they get their monthly period. “When I first started talking about this issue I’d get puzzled looks,” said Scharpf. “Menstrual hygiene is not really at the top of the global health priority list,” though she thinks that’s the kind of thing social entrepreneurship should be addressing.

For women in the United States and other developed nations who usually have access to bathrooms and a wide variety of sanitary products, a period might be an inconvenience but it rarely impedes their daily lives. It’s a different story, though, for many women and girls in low-income countries. A lack of affordable sanitary products and few restroom facilities can lead to numerous days of missed work and school.

Scharpf said she stumbled on this issue when she was interning for the World Bank in Mozambique in 2005. While visiting a small sewing factory, Scharpf asked the owner how she could improve her efficiency. The owner said that one of her biggest challenges is female employees missing work about 24 days a year while they are menstruating.

Scharpf learned the cost of commercial pads is more than a day’s worth of wages, so many women resort to using rags, and in some extreme cases, tree bark, leaves, and even dried mud. “I had never heard of this issue. I was just in shock,” she said.

When she returned home, she began asking friends from abroad if there are similar issues in their countries. “I talked to my best friend from Bangladesh. She said, ‘Yeah, girls in rural areas of my country have the same problem,'” said Scharpf. “I talked to women from Kenya, Nicaragua, India. I realized this was a global problem that not only affected productivity, but also health, education, and dignity. It really felt like this was something that was surmountable. So that’s why I decided to do a social enterprise around it.”

With seed money from Harvard, MIT, Stanford, and the nonprofit Echoing Green, Scharpf launched Sustainable Health Enterprises, or SHE, and spent the next several years talking to international health officials and researching ways to develop low cost, eco-friendly sanitary pads that could be manufactured locally overseas. After much trial and error, experimenting with various kinds of naturally absorbent materials, the eventual winner was banana fibers. “When the trunk of a banana tree is peeled back, it’s like an onion,” Scharpf explained. “The inside of the tree has different layers of fibers.”

Scharpf describes her project in this slide show by David Pelcyger:

With the help of a professor from North Carolina State University who specializes in pulp and paper science, and chemical engineering assistance from MIT, Scharpf developed a technique to turn the banana fibers into a fluffy material that provides the absorption in her “green” pads.

A small manufacturing pilot project Scharpf started last year at the Institute of Science and Technology in Kigali, Rwanda, will be expanded into an industrial-scale factory in the coming months which will produce about 600 pads an hour and employ as many as 10 people. A package of 10 pads currently sells for $2.25, but she said to make them competitive with non eco-friendly pads that sell for half that price and to reach those most in need, she will have to bring down the price. She said she hopes once the project moves beyond the pilot phase and can be manufactured on a large scale, the price could drop to as low as 50 cents.

Scharpf said her goal from the start was not only to help women and girls get access to affordable sanitary products, but to create jobs. “I started this not to repeat the charity aid model,” she said. “I think to really change a country, and an individual’s life, people need jobs. When I started in 2008, our country had gone through almost a depression. Just knowing family members and friends who have been out of work — that was a real eye-opener for me in terms of how important it is to have a job and the dignity that comes with it.”

Scharpf is now working with 600 small-scale banana farmers in Rwanda, the majority of them women. And she eventually plans to hire about 50 women to sell SHE’s pads in their communities and earn commissions. But Scharpf’s first priority is to target 9- to 14-year-old girls by selling pads to schools throughout Rwanda. The country’s Ministry of Education has been working with SHE and has agreed to provide some funding.

For now, Scharpf is relying on funding from private donors — individuals she calls “venture philanthropists” — to support SHE’s operations, but she expects to have enough revenue from sales in five years to cover operating costs in Rwanda. And she’s confident the work SHE has been doing in Rwanda will spread to other countries. “We have hundreds of people reaching out to us saying, ‘How can you help me do this in my neck of the world?'” said Scharpf. “I feel like as a founder, one of my goals has already been accomplished: helping start a global conversation.”

The NewsHour’s Agents for Change series highlights individuals helping communities solve problems, build businesses and create jobs. We’ll feature 10 of these social entrepreneurs just starting to make their mark, and invite your recommendations for others — tweet us @NewsHourWorld and use hashtag #AgentsforChange. Or you can post them in the below comments section.