Ellsworth Kelly, whose geometric paintings formed a cornerstone of postwar American abstract art, died Sunday in his home in Spencertown, New York, according to Matthew Marks of the Matthew Marks Gallery in Manhattan. He was 92.

Kelly’s bold, colorful geometric paintings and sculptures contributed to the “Color Field” style that emerged among abstract artists in the 1960s and influenced the Minimalist movement that would develop in the 1960s and 1970s.

Kelly was born in Newburgh, New York, in 1923 and served in the army during World War II. He was stationed in France, in a unit that worked to intimidate Nazi forces with fake weaponry and tanks, a group he called the “rubber army” in an NPR interview in 2007.

After the war, he studied at the School of the Museum of Fine Arts in Boston before returning to Paris to live and work as an artist. There, his work was relatively separate from the American abstract expressionist movement that gained steam in the U.S. in the 1940s. 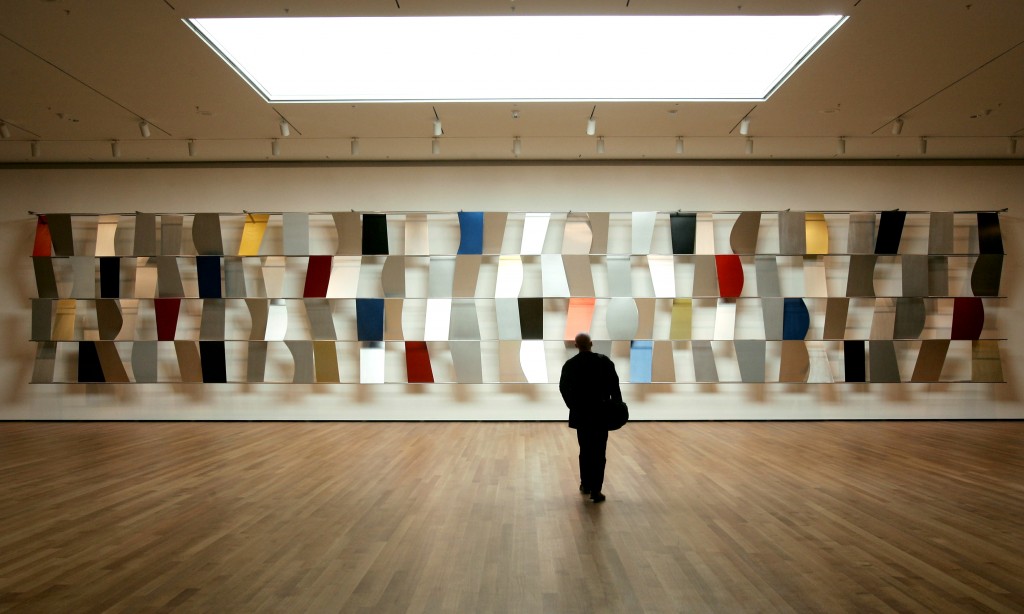 A visitor walks towards Ellsworth Kelly’s “Sculpture For a Large Wall” of anodized aluminum (1957) in the Museum of Modern Art in New York City on Nov. 15, 2004. Photo by Mike Segar/Reuters

In France, he observed architectural elements of Paris and the Romanesque churches in towns outside of Paris, elements that would become important to his early abstract paintings.

The photographs he took in France during the 1950s and 1960s show an early interest in drawing abstract shapes from real-life elements, Thomas Krens, former director of the Solomon R. Guggenheim Museum, told the PBS NewsHour in 1997.

“The paintings have the highest level of abstract precision. But he takes these things from the world around him. And that’s his magic,” Krens said.

Kelly held a solo show in Paris in 1951 and moved to New York City in 1954, where his work took several years to gather an audience. In 1956, he showed work at art collector Betty Parsons’ gallery, his first solo exhibition in the U.S., and was commissioned to create “Sculpture for a Large Wall,” a mural for the Transportation Building in Philadelphia. 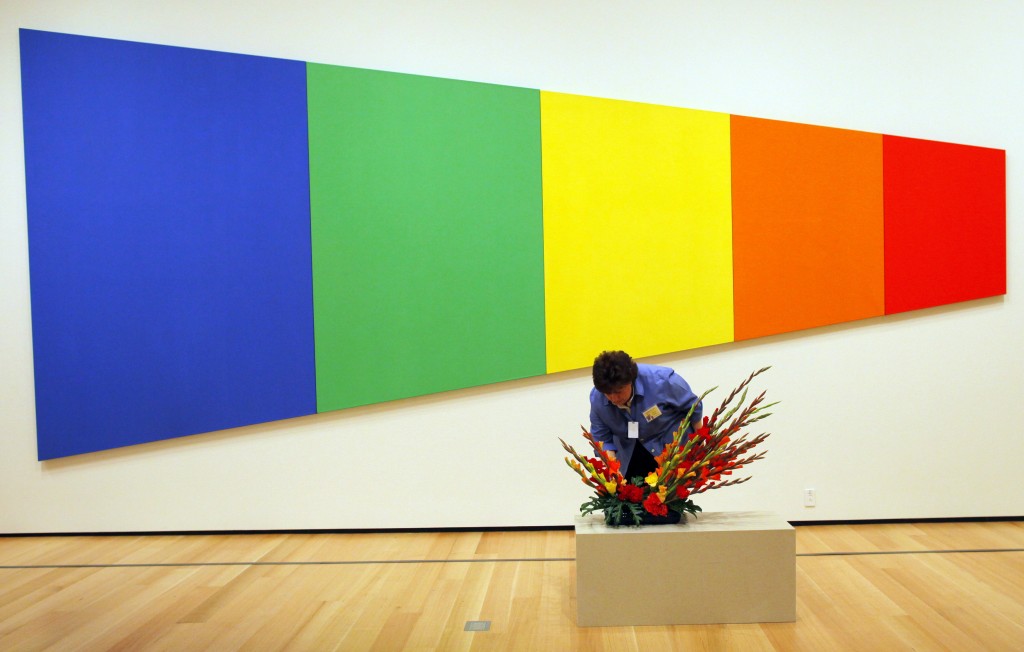 Marisa McCoy, from the Wareham Garden Club, works on a floral arrangement related to Ellsworth Kelly’s painting “Blue Green Yellow Orange Red” at the Museum of Fine Arts, in Boston on April 27, 2012. Photo by Brian Snyder/Reuters

His first U.S. retrospective was at the Whitney Museum of American Art in 1982, followed by retrospectives at the Fort Worth Art Museum, Museum of Fine Arts in Boston and Detroit Institute of Arts in 1987. A joint effort between the Galerie Nationale du Jeu de Paume in Paris and the National Gallery in Washington showed his work from France in 1992.

He received the National Medal of Arts from President Barack Obama in 2013 for shaping “more than half a century of abstraction.”