Stan and Donna Hunter knew they had a special carousel on their hands. They just didn’t know how special.

“It is by divine intervention that this carousel has been saved for all these years and is now in the midst of the National Mall,” said Donna Hunter, who has owned and operated the Washington, D.C., tourist attraction with her husband Stan for 25 years.

“We knew we had something special,” said her husband, Stan. “It brings tears.”

On Aug. 28, 1963 — the very same day the March on Washington was making history — the carousel was playing its own cameo role in the civil rights movement at an amusement park just 40 miles northeast of Washington.

Gwynn Oak Amusement Park had always been a whites-only park, until that summer day 50 years ago. After almost a decade of protests, the amusement park, outside of Baltimore, opened its gates to white and black children alike. And on that day, when Martin Luther King Jr. was delivering his “I Have a Dream” speech, eleven-month old Sharon Langley was the first African-American child to take a spin on the carousel alongside two white riding partners.

“It seemed to provide an example of the harmony that Dr. King spoke about that very same day,” said Amy Nathan, author of “Round & Round Together: Taking A Ride Into Civil Rights History,” “in which he said that he hoped that one day little black kids and little white kids would regard each other as brothers and sisters.”

In time, the merry-go-round would make its serendipitous arrival on the National Mall, just steps from where King created a defining moment in American history. But somewhere between Baltimore and the Beltway, the story behind the carousel was lost — until Nathan rediscovered the rich history, and published her book in 2011. 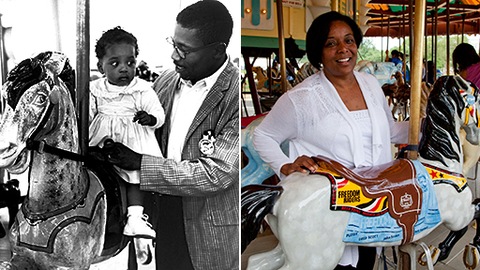 Pictured with her father in 1963, Sharon Langley was the first African-American to ride the carousel at Gwynn Oak Amusement Park. Fifty years later, the carousel now sits on the National Mall, where Langley visited it this summer. Photos by The Baltimore Sun and James Singewald

Nestled among a grove of trees, the merry-go-round sits near the middle of the National Mall, among the hustle of tourists whizzing by on Segways and staffers tossing a pigskin after work.

From under the yellow and green striped canopy wafts the sounds of a whimsical melody and tiny squeals of delight. For a few dollars, visitors can take a spin on any one of the 60 fancifully painted ponies the merry-go-round boasts, providing a thrill for the young and the young at heart.

“People come from all over the world to the carousel in the nation’s capital and they say it’s one of their favorites. It’s classic Americana,” said Donna Hunter. “And no one knew the history!”

The Hunters credit Nathan’s research for bringing the remarkable story to them. They all agree that the current setting seems fitting for such a monument.

“When you look at this beautiful merry-go-round it really is hard to imagine that there could have been a time when little children would have been denied the right to ride because of the color of their skin,” said Nathan. “When you go to take your kid for a ride on a merry-go-round, you’re not expecting to get a lesson in segregation and civil rights history.”

A few years after Gwynn Oak lifted its color barrier, the amusement park closed. In 1981, the carousel was purchased by a Smithsonian concessionaire, seemingly unaware of its rich history, and placed on the National Mall where it still sits today. The Hunters purchased it in 1988.

A New Generation of Freedom Riders

Although this is a recent discovery, that hasn’t stopped the Hunters from finding ways to commemorate the carousel’s past. This summer they erected a plaque to share the story.

Since the carousel sits on land owned by the National Park Service, the agency, too, has made efforts to incorporate the carousel and its story into educational programming throughout the district.

The Hunters even went so far as to find the exact horse that made history 50 years ago and decorated it with a “Freedom Riders” theme, complete with names of civil rights heroes and a brass plaque with the name of the carousel’s original freedom rider — Sharon Langley.

Little Sharon Langley is now 50 years old and works as a school administrator in California. She recently returned to the carousel to take a spin on her own small but significant part of civil rights history.

“I hope for a new generation of freedom riders,” said Langley, “Everyone has a contribution to make their community and society better. No act is too small.”