On the 125th anniversary of Vincent van Gogh’s death, institutions across the world are celebrating the Dutch artist’s legacy.

A portrait of van Gogh made of 50,000 dahlias is on display in Amsterdam until the end of the week, and a cycling path, which drew on van Gogh’s “The Starry Night” with an innovative light design, is available to the public. A 335-meter long cycling itinerary organized by Van Gogh Brabant takes visitors though five towns and cities, featuring sites like the school he attended in Tilburg and Etten-Leur, where his parents lived.

Auvers-sur-Oise, the French village where van Gogh spent his final days and died by suicide at age 37, has also planned several events to mark the day. Members of the artist’s family laid a wreath on his grave in Auvers-sur-Oise this afternoon. Visitors will explore the locations of some of van Gogh’s most famous work and see his former room in the Auberge Ravoux, where he lived the last 70 days of his life. Amsterdam’s Van Gogh Museum and the Institut Van Gogh in Auvers-sur-Oise worked together to organize the events. 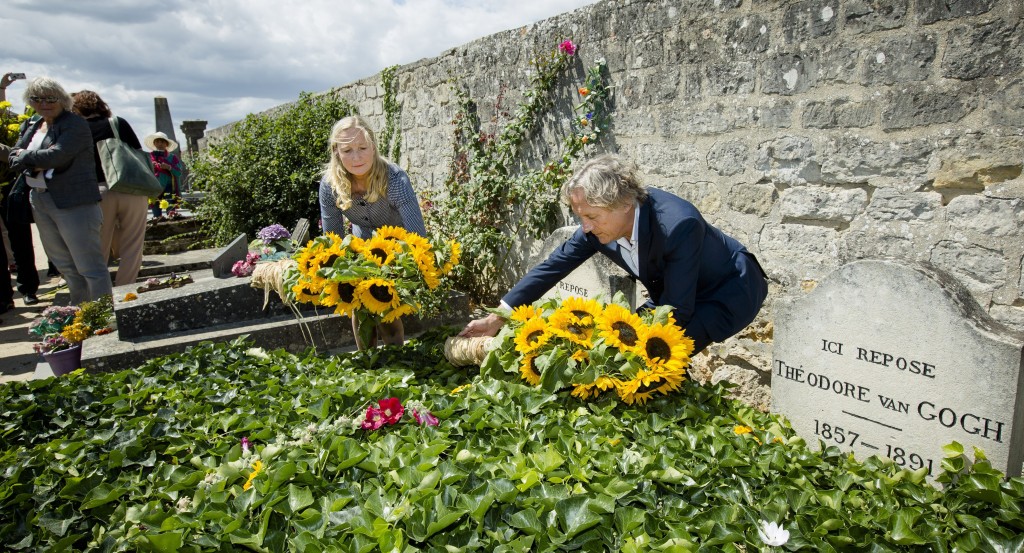 Machteld van Laer, left, and Willem van Gogh, right, descendants of Dutch painter Vincent van Gogh, lay down sunflowers at his grave on the 125th anniversary of his death on July 29, 2015 in Auvers-sur-Oise in northern France. Photo by Bart Maat/AFP/Getty Images

The Van Gogh Europe Foundation, a collection of approximately 30 organizations, is commemorating van Gogh the whole year under the theme “125 Years of Inspiration.” The foundation has organized events to take place throughout the year across the Netherlands, France and Belgium, all places where van Gogh once lived and worked.

The Van Gogh Museum also released “The Vincent van Gogh Atlas” today, which follows the artist’s European travels from his hometown of Zundert in the Netherlands to Auvers-sur-Oise. The museum’s exhibition “Munch : Van Gogh,” set to open in September, will celebrate van Gogh and Norwegian artist Edvard Munch. This exhibition will be the first to focus on the similarities between the two artists, both known for their emotionally charged artwork and innovative styles.

Left: A display of dahlias is erected to celebrate the 125th anniversary of Vincent van Gogh's death, on July 29, 2015 in Amsterdam, Netherlands. The 50,000 flowers were picked behind the house of the artist's birth in Zundert. Photo by Michel Porro/Getty Images