Artist Tammam Azzam is through with looking at destruction.

After completing “Storeys,” a large-scale abstract painting project based on photographs from Syrian cities, he has seen enough: buildings gutted by bombs, empty streets, a sense of stillness. “The emptiness made me feel so much fear,” he said. “I want to talk about that.”

Azzam left Damascus for Dubai in 2011, just after the beginning of a revolution that would grow into the massive, multi-sided armed conflict it is today, driving millions of people from the country. Already a prolific artist — his work has appeared at exhibitions in Budapest, New York and Houston, as well as Banky’s Dismaland exhibition in the UK — but suddenly lacking studio space and materials, Azzam began to create digital art. In 2013, his digitally-constructed image of Gustav Klimt’s “The Kiss” on a bombed-out building caught the world’s attention.

But he couldn’t look away from the images he saw coming out of Syria, online or in newspapers and magazines. So he began to paint. The result is an arresting visual chronicle of what remains when an entire people’s way of life is upended, possibly for generations to come. 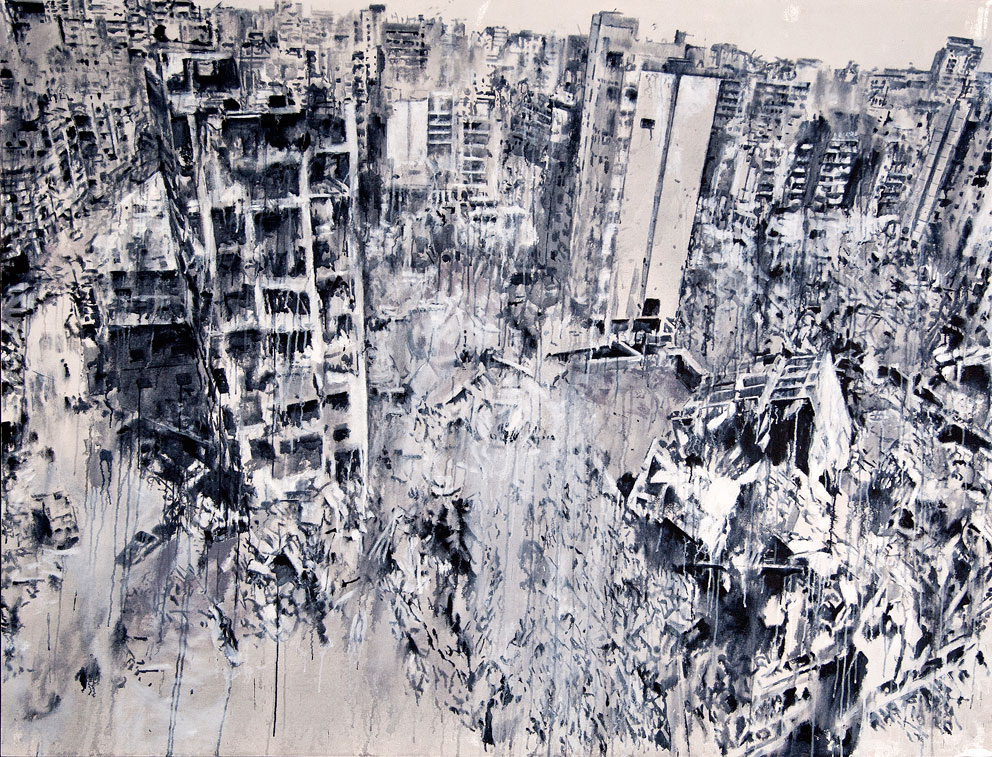 Azzam said he studied photographs from several Syrian cities on which to base the paintings. Some of the cities he portrayed include Douma — an important point of protest against the government in the early life of the revolution — and Aleppo, Syria’s largest city and an embattled opposition stronghold.

Azzam said he wanted to “take this challenge, to create or rebuild destruction.” He does so in sweeping expressionist brushwork that is also packed with details from the images he studied. Like the photographs, the paintings are empty of people or any other sign of life. 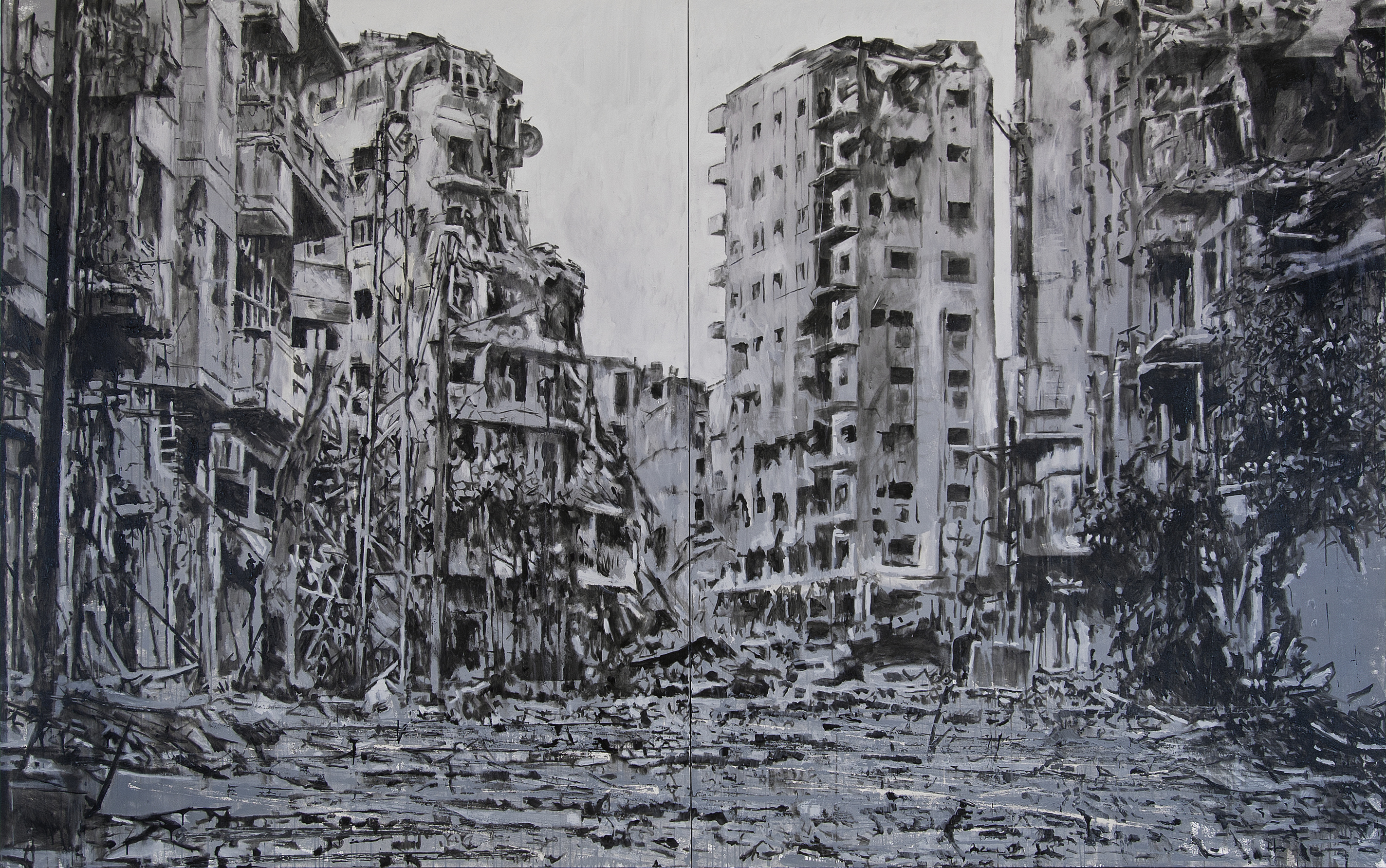 The process of creating these paintings was a physical and emotional struggle, he said — each painting took him about two months of working six to 10 hours every day. “I’m just in a prison in my studio, just seeing news and Internet and photos from everywhere, and talking, drawing, painting about something I can’t see in person, even in the close future,” he said.

The paintings, which he called the “Storeys” series, are now on display at Dubai’s Ayyam Gallery in an exhibition he titled “The Road.” The idea of a road, of setting out on a long journey, is one that has suddenly become a link between millions of Syrians as they flee war, Azzam said.

“I’m telling stories about Syrian people, about myself, about people everywhere. About the stories of going ahead on these roads, and we don’t know where,” he said.

The exhibition invokes “the journey of people, from their homeland to the new homeland,” Azzam said. “There is no end to that. Because all people are still thinking about going back to their original home.”

Now, Azzam is completing a five-month artist’s fellowship at the Institute for Advanced Study in Delmonhost, Germany. He said he has left the “Storeys” behind to become an entry in the history of the Syrian people.

“I believe that art can’t save the country. Bullets are more powerful than art, now,” he said. “But I believe at the same time that all kinds of culture, art or writing, cinema or photographs, can rebuild something in the future.”

See below for more images of the “Storeys” series, now on display at Ayyam Gallery. 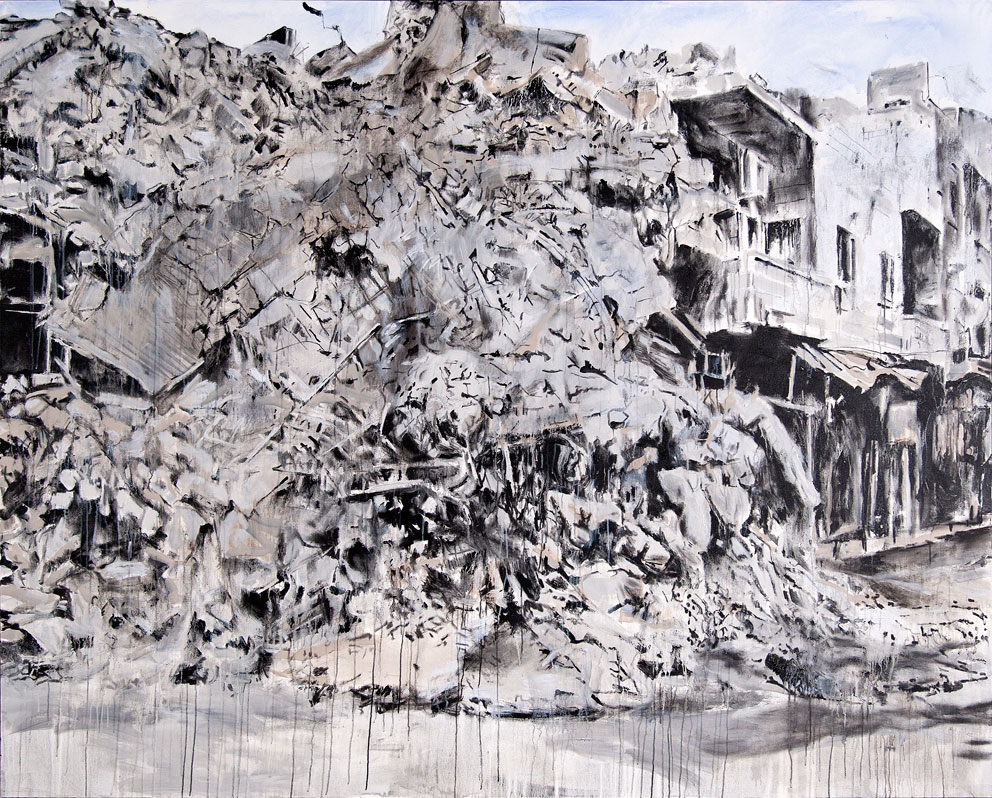 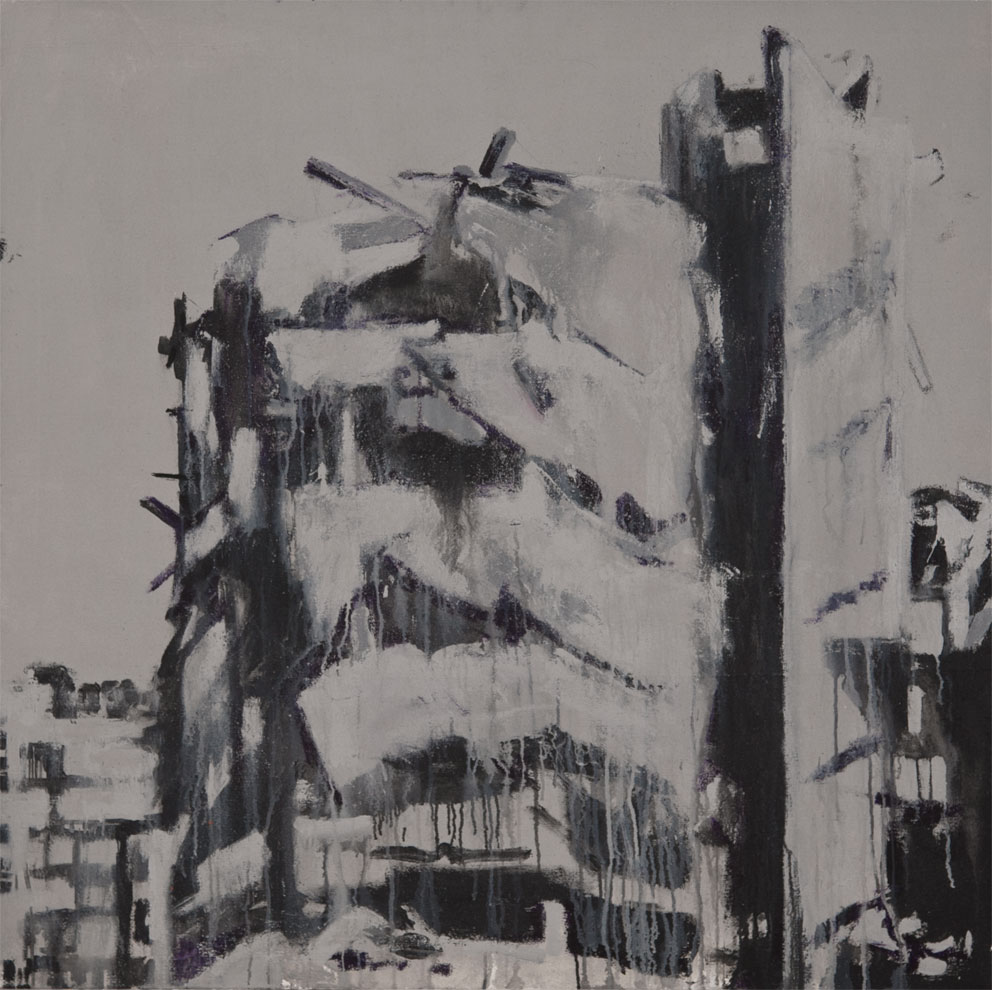 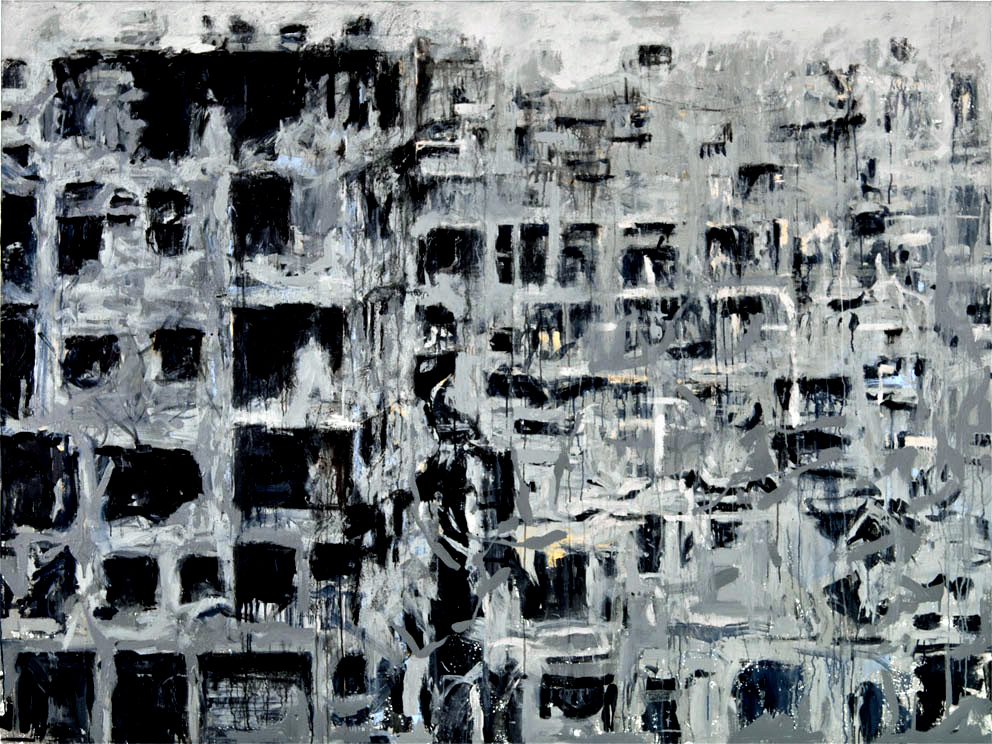 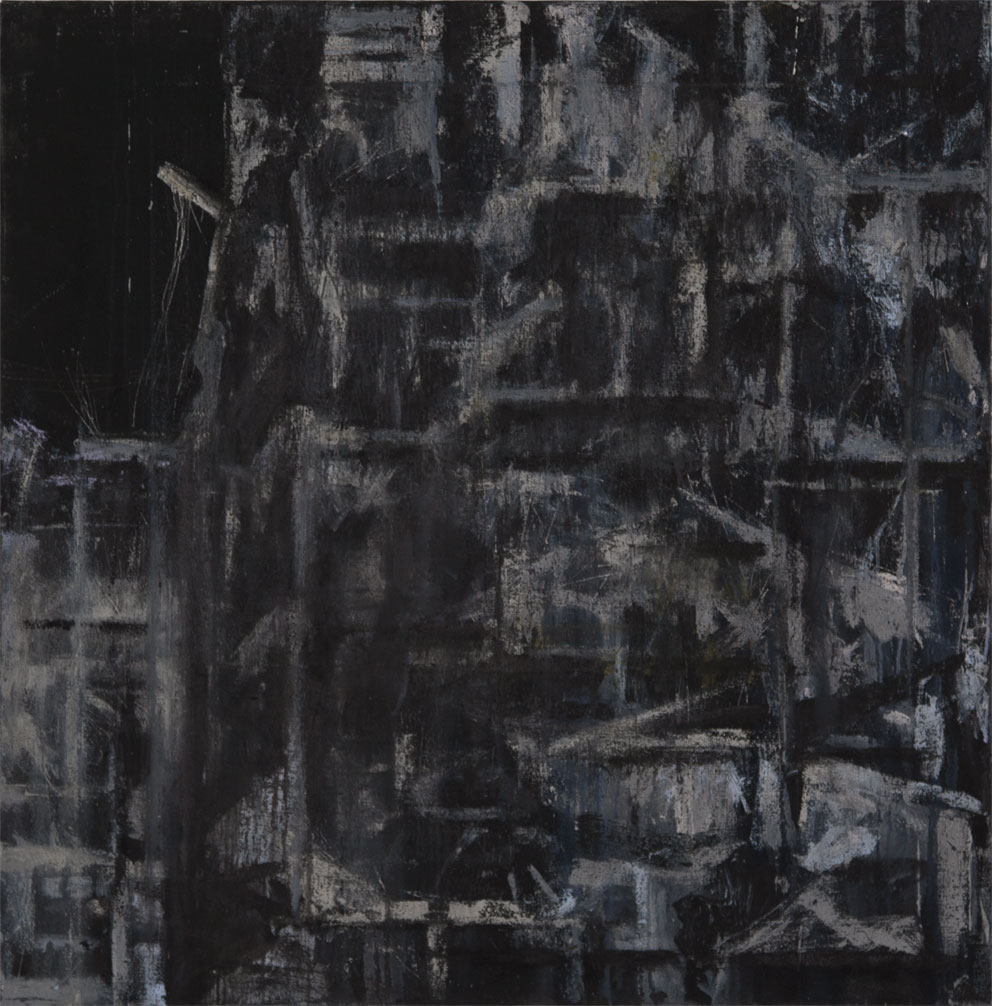 Explore more of our Syrian Voices series which highlights Syrian artists producing work around the world.