John Williams is an economic extremist. He thinks a collapse of the U.S. dollar and hyperinflation are just around the corner and that gold is therefore the best bet around. He thinks the government manipulates the economic data to make things look better than they are.

As you may know, we feature a monthly statistic we call “U-7,” which purports to be the most inclusive under- and unemployment number out there. In April, it hovered a touch below 18 percent. Williams features his own “shadow statistic” for unemployment. Last month, it hit about 23 percent. Obviously, we prefer our numbers to John’s (otherwise, we’d switch). But his re-inclusion of “long-term discouraged workers, who were defined out of official existence in 1994,” is the same basic adjustment as ours.

Our most recent NewsHour story, airing Friday night, concerns inflation, and here too Williams reports a much higher number than the official one: 10 percent instead of the current 4 to 5 percent (as of the last three months). Again, he tries to apply the old criteria of inflation to current numbers, adjusting for the government’s redefinition of the Consumer Price Index over the past few decades. 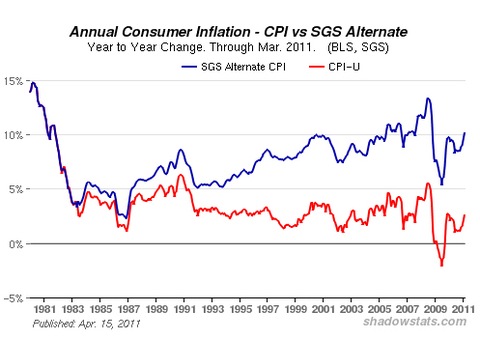 ShadowStat’s CPI Year-to-Year Growth chart. “The CPI-U (consumer price index) is the broadest measure of consumer price inflation for goods and services published by the Bureau of Labor Statistics (BLS). While the headline number usually is the seasonally-adjusted month-to-month change, the formal CPI is reported on a not-seasonally-adjusted basis, with annual inflation measured in terms of year-to-year percent change in the price index. Here we show the annual percent change (year-to-year) in both the CPI-U and the SGS-Alternate CPI.” Chart courtesy of ShadowStats.com

We show you the ShadowStats inflation chart not to worry you or endorse John’s methodology, which is seat-of-the-pants to be sure. But it’s useful to remember that a whole lot of Americans buy his basic story: that the U.S. government, to stave off any economic downturn, has been “printing” dollars, which will inevitably make those dollars less and less valuable. And that, thinks John Williams, is why food, energy and, yes, gold and silver prices, have been shooting up so dramatically in dollars of late. Monetary-induced inflation, pure and simple.