Antoine “Fats” Domino was a 1950s rock ‘n’ roll pioneer, a larger-than-life New Orleans figure and a role model for the African-American community in a time of deep segregation.

He died Wednesday at the age of 89, his wife told local media outlets on Wednesday.

Born Feb. 26, 1928, in New Orleans, Domino came from a musical family. His father played violin, and he learned piano from his brother-in-law at the age of 9. A year later, as Rolling Stone magazine reported, he was “playing for pennies in honky-tonks like the Hideaway Club,” the New Orleans venue where he earned the nickname “Fats.” He soon found himself playing alongside local piano legends, who Rolling Stone adds taught him “the classic New Orleans R&B piano style — easy-rolling left-hand patterns anchoring right-hand arpeggios.”

By the time he was 20, Domino had gotten married, nearly died in a car crash, nearly lost a hand in a factory accident, caught the ears of major talent scouts and earned a record deal.

A year later, in 1949, he would record what many consider as the first rock ‘n’ roll record, called “The Fat Man,” where his distinctive rolling piano and “wah wah” vocals led him to sales of more than 1 million copies by 1953.

The pianist and singer-songwriter then went on to release a series of crossover hits, including “Ain’t That a Shame,” “Blueberry Hill,” “I’m Walkin,” “Blue Monday,” and “It’s You I Love.” He’d go on to outsell every 1950s rock ‘n’ roll star except Elvis Presley.

“You could tell a Fats Domino sound a mile away,” said Dwan Reece, music curator at the National Museum of African American History and Culture, specifically for his baritone voice, mellow sound, New Orleans flavor and piano that set the beat. “He bridged the transition between rhythm and blues and rock ‘n’ roll. He was a key innovator in opening that new sound.”

For decades after that, Domino continued to record and tour, something that wasn’t always easy as a black man in that era. A documentary described the difficulties of the road for black musicians in the South then, relaying how some had to drive 100 miles from where they performed to find a hotel that would accept them. Domino once had to watch a film he acted in from the theater’s upstairs level, the documentary said. 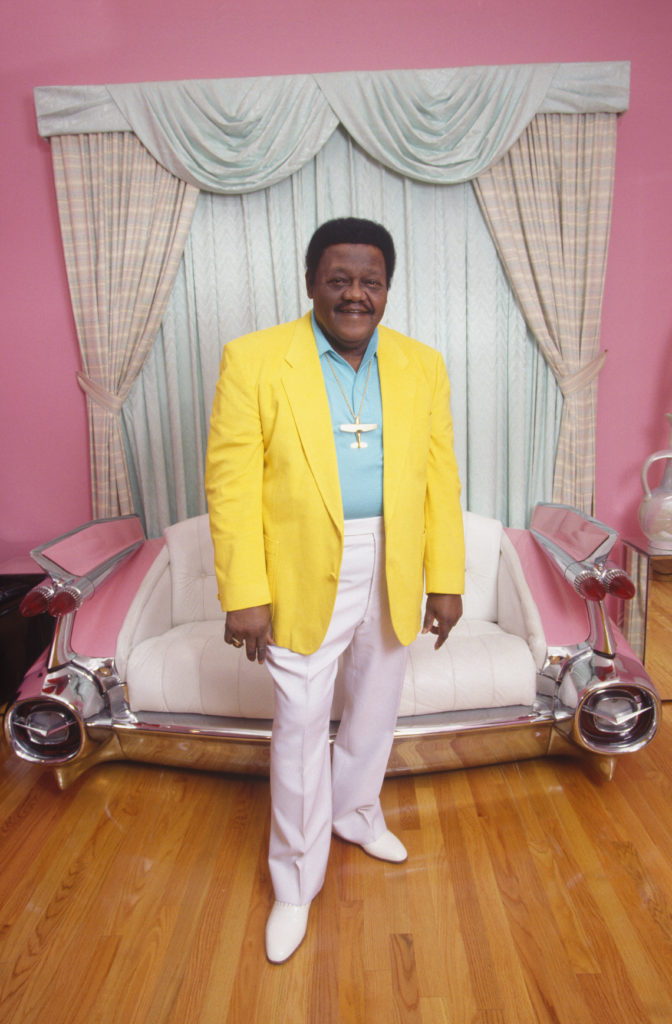 Antoine “Fats” Domino poses in front of his Cadillac sofa at his home in New Orleans’ 9th Ward, the neighborhood where he grew up. Photo by Philip Gould/Corbis via Getty Images

For those reasons or others,  Domino never really liked touring. He often said he loved New Orleans food best, which he couldn’t get on tour, especially crawfish he’d cook on the stove for breakfast. By the 1980s, he stopped touring altogether and stayed put in New Orleans, living in a big pink-and-white mansion in the Lower Ninth Ward, and driving a pink cadillac.

Wendell Pierce, an actor known for his roles on “The Wire” and “Treme,” and a fellow New Orleanian, said he remembered driving as a kid to see Domino’s house.

“It was a place of great prominence and pride. He had that impact on the community,” Pierce said. “He worked with a neighbor of mine, and it was so impressionable as a young kid to know that these men were traveling the world, that they were artists, that they were revered around the world.”

Pierce also said Domino made him and many others in the black community want to be artists.

“His music, while it seemed like it was just a part of the popular vein, was so important to the African-American community because you saw a black man empowered in a time of deep segregation and violence,” he said. “It inoculated you from that violence. Emboldened you. Protected you. Sent a message to the community and the world that we were a people of strength.”

In August 2005, when Hurricane Katrina bore down on New Orleans, Domino decided to stay along with many other New Orleanians, in part because Rosemary, now his wife of 50 years, was ill. Some thought he’d died in the flooding; an “R.I.P. Fats You will be missed” message was even spray-painted on the house. A Coast Guard helicopter ultimately saved Domino and his family, who lost most of their possessions in the hurricane, but not a custom-made couch of Domino’s made from his vintage pink Cadillac.

“I’m still alive and kickin’ and I’m sorry for them that didn’t make it, but we’re gonna make it… we’re making it,” the musician told NPR afterwards, just as he released an album whose title track, “Alive and Kickin,’” went:

Domino — who by the end of his life had sold more than 65 million records, earned the National Medal of Arts, and was named in 1986 to the Rock & Roll Hall of Fame — died Wednesday where he wanted to be, in New Orleans.