For Graffiti Artist, Monopoly Money Makes the World Go ‘Round 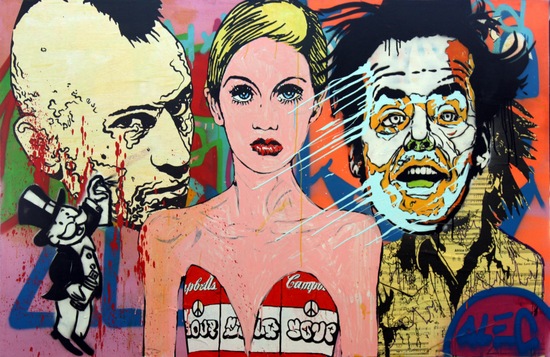 The street artist’s first solo show, “Park Place,” opened at the LAB ART Gallery in Los Angeles earlier this month. Alec Monopoly, who is known only by his pseudonym, and the team at LAB ART transformed the gallery space, inside and out, into a life-size version of the Monopoly board game. Alec’s signature game piece, a 1964 Pontiac Catalina owned by actor Adrien Brody, was painted during the show.

“The idea behind the exhibit is to bring the game of Monopoly to life,” explained Alec, who sold one of his paintings in the show for $3 million — in Monopoly money. Since each board game comes with $20,580, the buyer used money from 146 games to purchase the painting.

Iskander Lemseffer, co-founder of LAB ART Gallery, was immediately drawn to Alec’s work when he first saw it on the streets of Los Angeles five years ago. Alec, originally from New York City, has lived in Los Angeles since 2006. He started creating graffiti 15 years ago.

Sitting on the floor watching Alec paint the Catalina, Lemseffer said, “I told him, ‘You do realize that one day this car will be in a museum.'” When LAB ART opened in May 2011 — an auto body shop that Lemseffer and his sister Rachel Joelson transformed into a 6,500 square foot gallery that exclusively features street artists — Alec was one of the first featured artists. “Park Place” is open to the public through April 14.

Alec’s art centers around the board game’s mascot, Rich “Uncle” Pennybags, a.k.a. Mr. Monopoly. In his paintings and graffiti, Alec puts Pennybags into a variety of situations: Pennybags with no money, Pennybags running away, Pennybags crucified by Wall Street.

Pennybags represents capitalism in a larger sense, Alec said, and his use of the image is a reminder that the road to financial success can sometimes mirror the efforts of someone attempting to win a board game.

The goal of Monopoly, of course, is to buy all the real estate in a micro-version of Atlantic City and drive your fellow aspiring tycoons into bankruptcy. Each player has the chance to win big, but they can also lose it all. These are also the risks and gambles that Alec sees playing out in the real world. And at the heart of financial success or demise is cold hard cash. “Sometimes the things that cause us hardship could be very well the thing that gets us out of that hardship,” he said.

Art Beat recently talked to Alec about his work:

Does it bother you at all to be chased and/or arrested by the police, simply for making your artwork?

Alec: It would only bother me if I were chased/arrested for the ‘idea’ of my work, than the act. Other than that, I know when I put work up in the streets that I’m always subject to being caught. That vulnerability is part of the process and you just have to apply as much creativity to the process as you do the art.

How have you seen the street art scene change since you began?

Alec: The street art scene has grown tremendously over the last few years, becoming more fluent in the mainstream culture. I feel it’s great that more people are paying attention to what is in the streets, but at the same time concerned that people are treating it as another fad and getting involved for the wrong reasons. Graffiti and street art is nothing new, there’s a history behind it all that dates back many decades.

Some street artists use wheatpasting because they think it’s less destructive than graffiti. Since you use both, what is your rationale for using one or the other, especially when one of the mediums is more temporary and the other more permanent?

Alec: No matter the medium, any work put up in the streets is temporary. That’s why I feel there is room for street art in galleries. Having your work in a gallery is the only way to be ‘more permanent,’ providing your work the opportunity to exist past the street’s unforeseen timetable.

As for what medium I use roughly depends on what I want to accomplish. If I want to place a detailed piece in a busy area, then I’ll probably use a wheat-paste, but if I’m commissioned to create a ‘legal’ mural, then I’ll probably paint freehand. Again, it primarily depends on time alloted and what medium better identifies with the integrity of my work.

Why Rich “Uncle” Pennybags? What does he represent for you?

Alec: He’s not only an American icon, but recognized on a global scale. I feel that Mr. Monopoly, Rich “Uncle” Pennybags, represents capitalism, but my use of his image is more about reminding the general population that we are all a part of game that anyone of us can win. Sometimes the things that causes us hardship, could be very well, the thing that gets us out of that hardship.

What inspired you to paint actor Adrien Brody’s car during your first solo show “Park Place” in Los Angeles? What initially gave you the idea?

Alec: The idea behind the exhibit is to bring the game of Monopoly to life, filling the walls with my past to current work, as well as introduce some real-life components that further illustrate my vision. One of those components is Adrien Brody’s 1964 Pontiac Catalina. I felt it was appropriate to introduce my own personal designer game piece. We all have to have a game piece to be relevant.

Alec: I don’t know if it’s more of street art encouraging repetitiveness than it is more of how our culture operates. People don’t generally look for art in the streets, but when your work catches their eye and they see it over and over again, they begin to pay attention.

What do you hope that people get out of seeing your work, especially that which is posted on the street?

Alec: I just hope that they see something. Not everything that I do is going to spark interest, but if it helps create some conversation and emotion, then that alone makes everything I do, worthwhile.

When you were young, did any other graffiti artists teach or mentor your development as a painter?

Alec: I’m from New York City, where graffiti and street art have a rich history and continuous activity. I never really had a mentor, unless you count the activity I was exposed to it on the streets. However, if I could have picked a mentor, it would be Keith Haring; a combination of brilliance and hard work.

What are your main tools that you use to create and post your art?

Alec: I use aerosol and acrylic paint for most of my work, and when I’m creating large murals, I use ladders and lifts when necessary. When I do put up wheat-pastes, I use a paste that I created, along with a bucket and broom. Nothing extravagant.

During your travels, have you been inspired by the work of any particular street artists’ work?

Alec: I can’t point to one artist specifically, more than just the fact of seeing street art by other artists within their respective community is inspiring. To me, it sets the tone for that community, an underground representation of their culture.