On March 15, Canadian Prime Minister Justin Trudeau brought Ivanka Trump and U.S. ambassador to the United Nations Nikki Haley to “Come From Away,” a Canadian musical that celebrates the generosity of a community that welcomed outsiders on 9/11.

Diane Davis, who was in the audience with Trudeau, lived this story. On Sept. 11, 2001, when the American airspace closed, more than 6,500 people on 38 planes were diverted to Gander, Newfoundland, a town of about 10,000 people with an airport that served for years as a refueling stop. Davis helped to organize the volunteers and convert the town’s school into a shelter as the local population swelled by two-thirds.

Sixteen years later, the story of a town that opened its arms to newcomers has taken on new significance as Davis, and many of the others who volunteered on 9/11, help four Syrian families adjust to life in Gander. “It’s the same people, the same organizations, the same churches, the same community halls that know [that] it’s still a good thing to do something for people,” Davis said.

The musical, directed by Christopher Ashley, is the fifth Canadian show to make it to Broadway and was written by David Hein and Irene Sankoff, who previously wrote “My Mother’s Lesbian Jewish Wiccan Wedding.” It premiered at La Jolla Playhouse in 2015 and debuted on Broadway on March 12.

Trudeau’s visit to the show spotlighted the differences in recent policy between the U.S. and Canada, which has so far welcomed more than 35,700 Syrian refugees, as well as the close relationship between the two countries. With the arrival of Syrian families in Gander, “we’ve seen [Trudeau’s] policies play out firsthand,” Hein said.

In remarks before the show Wednesday, Trudeau generally praised the volunteers who inspired the musical. “The world gets to see what it is to lean on each other and be there for each other through the darkest times,” he said.

He added that the show highlighted the links between the U.S. and Canada. “There is no relationship quite like the friendship between Canada and the United States,” he said. “This story, this amazing show, is very much about that, and it’s about friendship as well.” Neither Trump nor Haley responded to a request for comment.

On Sept. 11, Hein and Sankoff were living in a residence hall near Columbia University in New York City. In the midst of the confusion following the attacks on the Twin Towers, as people in the building tried to reach their loved ones, a musician in the building sat down to play the piano in the hall’s common space. Others soon gathered to share the music — an experience that Hein and Sankoff drew on while writing the show, Hein said.

“Everyone came together,” he said. “There’s something about the music at the time that calmed us down, obviously, but also brought us together. That certainly resonated with us in the story of Newfoundland. The music out there, it’s sort of in the DNA of Newfoundlanders.”

With an onstage band, that music, containing strong strains of Celtic and rock influence, is a constant, celebratory presence in “Come From Away.” 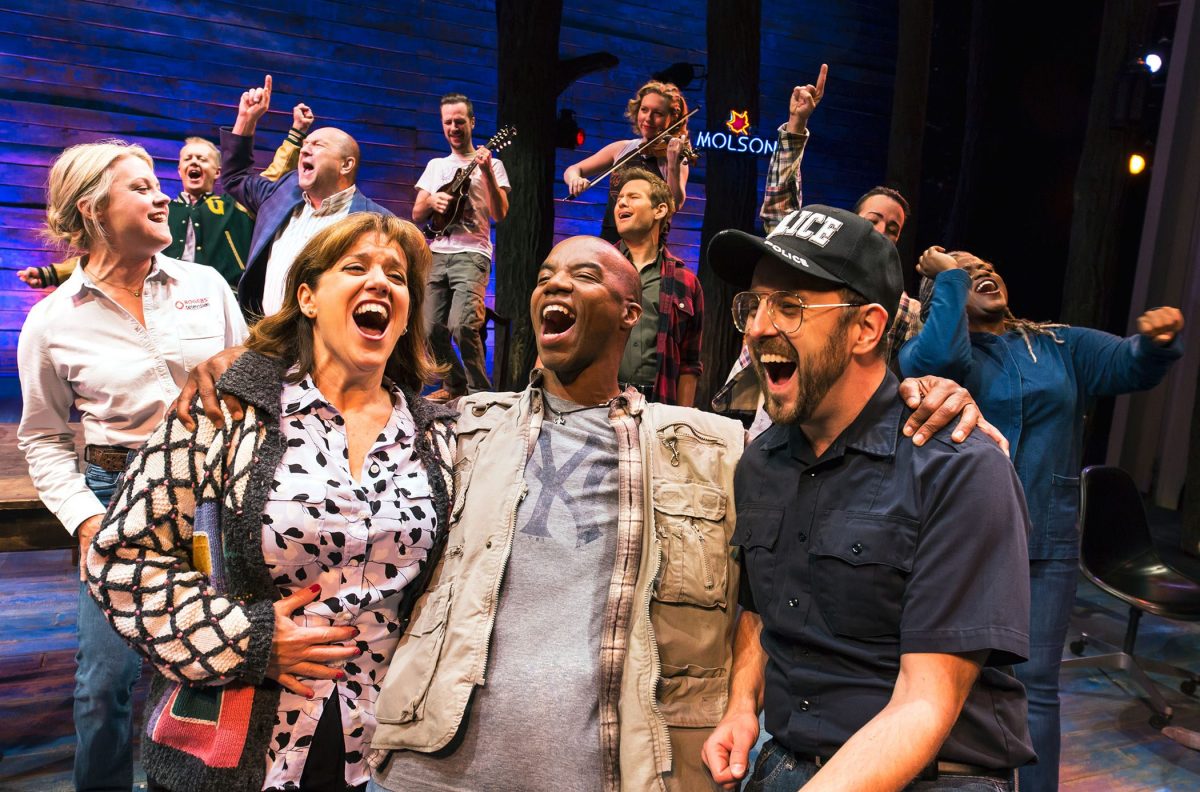 The cast of “Come From Away.” Photo by Matthew Murphy

Michael Rubinoff, associate dean of Visual and Performing Arts at Sheridan College, first suggested the two write a musical about what happened in Gander in 9/11. In 2011, Hein and Sankoff traveled to Newfoundland for a planned visit of several weeks. They ended up staying for a month, talking to dozens of residents about the days that followed 9/11.

The musical, Hein said, was essentially “us trying to tell a million stories.” And nearly every cast member portrays two sides of the story: the Newfoundlanders, furiously carting items like tampons and baby formula to converted shelters, and also the passengers, bewildered at their new rural surroundings.

Several characters’ experiences and concerns ring familiar in the present-day U.S., including that of a Muslim traveler who must receive an invasive body search before boarding a plane to leave Gander. The show’s opening in New York City came just before federal judge issued a temporary hold on President Donald Trump’s executive order which would bar immigration from six Muslim-majority countries, his second attempt to do so following widespread protests.

Amid the rise of xenophobic rhetoric among some politicians around the world, “A tale of an insular populace that doesn’t think twice before opening its arms to an international throng of strangers automatically acquires a near-utopian nimbus,” Ben Bradlee, theater critic for The New York Times, wrote in a review of the show.

The story of Gander opening its doors in an emergency has become “even more relevant” in recent months, producer Sue Frost said.

“Seeing the show onstage here, in New York, the show resonates in a way it has not resonated anywhere else … some of that has to do with timing,” she said. 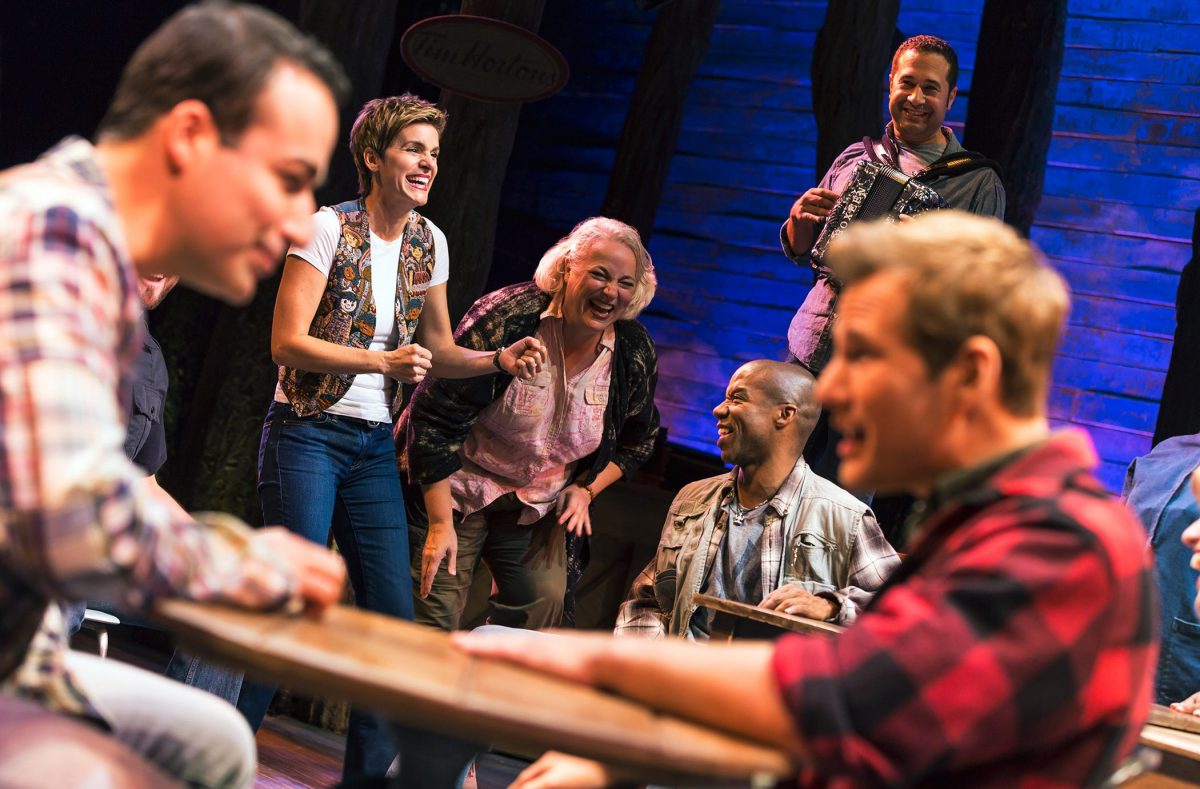 The character of Beulah in “Come From Away,” center, was based in part on Diane Davis, a resident of Gander. Photo by Matthew Murphy

Davis hopes the story of Gander can inspire others to reach out across cultures, she said.

“I would hope that people seeing that story might be less fearful of someone they’ve never met before who might have some kind of a difference, whether it’s the way they dress or the language they speak or who their partner is, that maybe they would just try and reach out. And if you don’t reach out, at least don’t shun people,” she said.

In recent months, with the help of local churches, Gander raised $60,000 to sponsor the four Syrian families and organized committees to help them with various aspects of their transition to Canada. Davis, a former French immersion teacher, worked to help the families’ eight children enroll in the same school from which she had recently retired, and to show them the local playground and grocery store.

That was one of her goals one morning in August as she headed to the house of a Syrian family who had arrived in Gander the previous night. When she arrived, she took out her tablet, drew a swingset and a slide for the family’s five-year-old boy and asked: “Do you want to go with me to the playground?”

He nodded his head, and Davis led the whole family down the street toward the playground. They had not yet seen the community in daylight. As they walked out the door, the boy’s 13-year-old sister looked up and down the street, and under her breath, she said, “Canada is beautiful.”

Left: "Come From Away," a Canadian musical, celebrates the generosity of Gander, Newfoundland, who accepted thousands of stranded passengers on 9/11. It opened on Broadway this week. Photo by Matthew Murphy