‘Good Fortune’ Looks at Pitfalls, Possibility of Development in Kenya

On Thursday’s NewsHour, we’re looking at the film “Good Fortune,” a documentary about international development projects in Kenya that are resisted by the community members they intend to help. It’s part of our partnership with The Economist magazine that showcases the art of filmmaking. 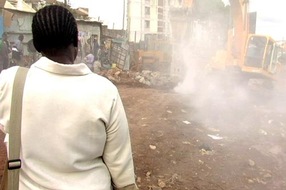 “Good Fortune” was directed and produced by Landon Van Soest — who was awarded a Fulbright Fellowship in the Creative and Performing Arts to begin production of the film — working with producer/editor Jeremy Levine. Together they founded Transient Pictures, which also is responsible for the award-winning “Walking the Line,” a feature documentary about “vigilantes” along the U.S.-Mexico border.

They’ve also produced original content for such clients as the Sundance Channel, Working Films, and United States Artists. Currently, they are working on “The Legacy Project,” a 10-part video series profiling theater legends, for the Dramatists Guild. Van Soest has done extensive research on economic development in East Africa with the School for International Training and Levine produced educational videos for Ethiopian schools. They also received the 2011 Overseas Press Club Carl Spielvogel Award for international reporting for their work on “Good Fortune.”

The following is adapted from material written by Van Soest for the POV website when the full film aired:

> The concept for “Good Fortune” was born over six years ago, when I was a student of economic development in Kenya. Like most Westerners, I was deeply affected by the extreme poverty I had seen traveling in the developing world and felt overwhelmed by feelings of compassion. I decided to study in Kenya in an effort to learn how I could use my energy and resources to be part of the solution, but I found the reality far more complex than I had anticipated. For starters, I was shocked at how many foreign dollars were already at work — the West has spent more than $2.3 trillion in aid to Africa over the last 50 years — and by the sheer number of organizations working on the ground.

The longer I spent in Kenya, the more I sensed a disconnect between the values of the people administering aid and the people targeted by it. Many of the communities I visited felt completely disenfranchised by the international aid organizations. Not only were donors failing to meet the needs of these communities, but they were often not involving them in the decision-making process at all. I became incredibly sensitive to the fact that outsiders often were taking it upon themselves to dictate the futures of entire communities. 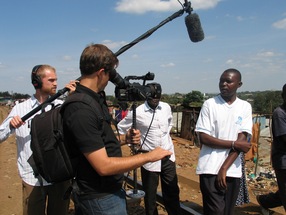 I shot “Good Fortune” over a period of three years. One of the people I focused on was Silva Adhiambo, who had moved to the slum to be a midwife so she could support her family and send her four children to good schools. Not long after we wrapped production, she suffered health complications and a stroke after giving birth to a daughter. She ended up in the hospital for several months and wiped out all her savings.

Without the use of her arm, Adhiambo was unable to continue her midwifery or buy farmland so she could leave Kibera. To make matters worse, Adhiambo’s husband lost his job as a night watchman. The family members did have one lucky break, however, as their home was spared from demolition in this phase of the upgrading project. So they still live there, relying on the goodwill of friends and family for their daily needs.

The film is a cautionary tale that says, despite all of our best intentions and despite our resources, if we’re not smart about the way we administer aid, we can negatively impact communities. But I would also be remiss if I made a film that had the effect of viewers walking away and throwing up their hands after watching it. There are tremendous solutions out there and there are a lot of great things we can do. It’s important that we, as Western citizens, do what we can to combat extreme poverty. I hope this film can be the beginning of a discussion, and I hope that the way we administer aid in the future can change as a result.

The filmmakers conducted interviews with leading development experts in their video series, “Strides in Development.” Here are those interviews, courtesy of POV: