Goodness! U-7, our own measure of under-and unemployment, shot up to 18.6 percent Friday morning, a rise that gets us back near the number when we first inaugurated the Solman Scale last December.

Friday morning’s job numbers: only 18,000 added in June. Combine that with downward revisions of jobs added the previous two months — minus 44,000 — and the American economy has 26,000 fewer jobs than was supposed a month ago. 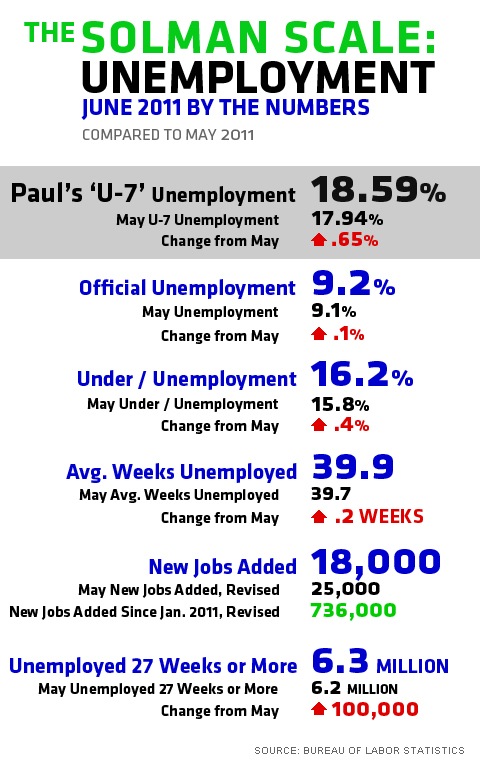 As Bloomberg put it:

“American employers added jobs at the slowest pace in nine months in June and the unemployment rate unexpectedly climbed to 9.2 percent, sending global stocks tumbling on concern the world’s biggest economy is faltering.”

Paul Krugman on his blog:

“Ugh. That was a seriously ugly jobs report. Almost no job creation, with slow private-sector growth offset by falling public-sector employment; a falling employment-population ratio; and (I don’t know how many people have picked this up), an actual decline in wages, albeit a small one.”

“Employment-to-population ratio declined from 58.4 to 58.2 per cent, and is now tied with two other months as the lowest point since the start of the recession.

Both the length of the average work week and average hourly earnings declined.”

But the most disturbing report was personal, coming earlier in the week — from a NewsHour viewer who has written to me regularly over the years. I had emailed him with a question: does or doesn’t unemployment insurance discourage Americans from taking really tough jobs? He wrote back:

“I’m not talking about people still receiving unemployment benefits and/or reluctant to work. I’m talking about the MILLIONS of 99ers who’ve exhausted all their unemployment benefits or who will by December of this year who are DESPERATE for work. I can’t even find minimum wage work in my predominantly black/Hispanic area, have no money for bus or rail fare for job searching, can find no consistent source for it, work very occasional yard work for church friends to occasionally cover the cost of soap, laundry detergent, the laundromat, dry cat food, deodorant, toilet paper & toothpaste. I can only do SOME of my laundry about once every three months and have to lug it a mile down the road in a rolling duffel bag and back. The only reason I’m not homeless is because my landlord took pity on me because I’d previously kept some other tenants from burning down the building, But I don’t know when his patience will run out. I owe him thousands in rent and my benefits ran out 15 months ago. My situation is RARE to have a landlord that compassionate. What about all the others?? What about the ones with wives and children?? The ONLY help I get from the government is food stamps that I also feed my pets with. I go hungry six to eight days a month because the one church pantry within walking distance only allows three visits a year and has three churches participating with it and STILL can’t begin to meet the need.”

I’ve known this fellow, though only via email, for a number of years. I can testify that he’s been a thoughtful and eloquent, if sometimes critical, viewer. He lives in the South. He has been getting angrier. 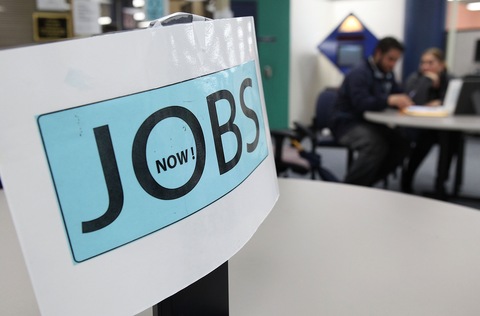 So, what to do about the jobs problem?

“The situation cries out for aggressively expansionary monetary and fiscal policy. Instead, however, all the political push is in the opposite direction.”

“These weak jobs data indicate the economic recovery remains in low gear, and policies other than big deficits and printing money are needed to get Americans back to work.”

But of course, the question to Morici: policies like what? He has long argued that if China were simply to revalue its currency against the dollar — by 30 percent or so — our problems would pretty much go away. But how likely is that? And even if theoretically possible, how likely is that to create a job surge in America? Moreover, there’s new evidence to suggest that even China’s is an economy built on unrealistic assumptions about the future.

I feel honor bound to end the monthly jobs post with one of the most considered and original thinkers I know, Terence Burnham, biotech entrepreneur, money manager, the Harvard professor who taught me microeconomics when took off a semester from the NewsHour to re-educate myself, co-author of “Mean Genes”, sole author of “Mean Genes and Lizard Brains”, and a dot.com investor who made NewsHour appearance during the boom and bust. Terry is off to teach at Chapman College in Orange County, taking with him his family and exceedingly grim view of our economic future.

Friday’s numbers will have come as no surprise to him, since he thinks Americans are still living the dream — largely unaware of how much poorer we are than we think, mainly with regard to what we will need for retirement.

I’m hoping Terry is wrong, hoping our adjustments will be gradual, hoping the rest of the world will grow enough to buy more from us… Hoping.