Kendrick Lamar dedicated his Grammy to hip hop tonight after winning for best rap album, one of his multiple wins for “To Pimp a Butterfly.”

With five wins, Lamar received more awards Monday than any other artist at the 58th annual Grammy Awards, which were hosted by LL Cool J at the Staples Center in Los Angeles. Lamar’s song “Alright” also earned the rapper top honors in the rap performance and rap song categories.

The White House congratulated Lamar on Twitter after the announcement.

Shoutout to @KendrickLamar and all the artists at the #Grammys working to build a brighter future. #MyBrothersKeeper https://t.co/XM0KwV3jNB

The ceremony also brought big wins for Taylor Swift and The Weeknd, who were each nominated for seven awards. Swift’s album “1989,” the top-selling album of 2014, won for album of the year and pop vocal album, and she and Lamar won together in the music video category for their collaboration on “Bad Blood.”

The Weeknd, who performed a medley of hit songs including “Can’t Feel My Face” and “In the Night,” won for best urban contemporary album and R&B performance.

Lady Gaga took the stage tonight in a tribute to David Bowie, who died in January at the age of 69. It included Bowie’s hits from the 1970s and ’80s, including “Space Oddity,” “Changes,” “Ziggy Stardust,” “Fashion,” “Under Pressure” and “Heroes.” Nile Rodgers, who worked with Bowie on “Let’s Dance” (1983) and other projects, directed and appeared in the tribute, which Grammys producer Ken Ehrlich asked Lady Gaga to perform. 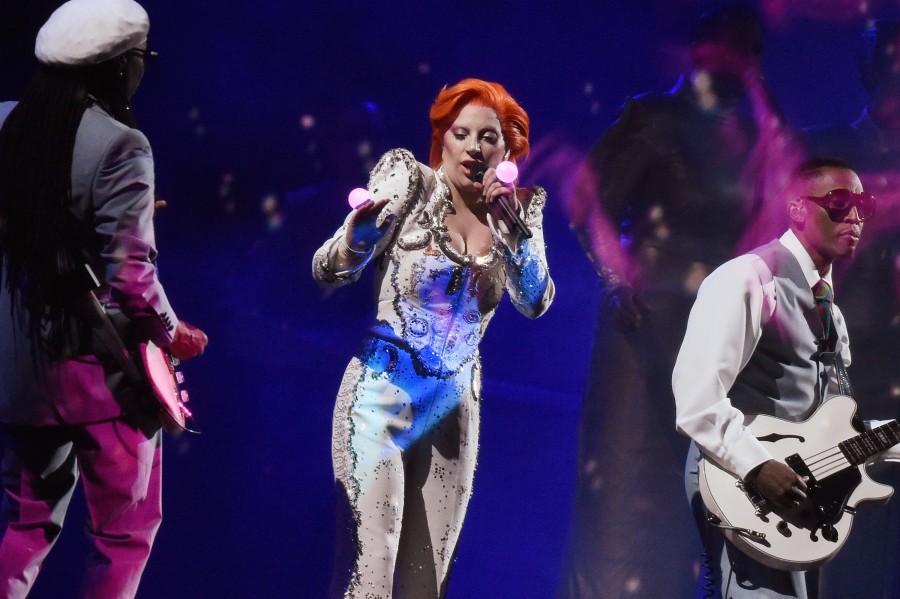 “Hamilton,” the musical whose combination of hip hop and history became wildly popular this year, took home the award for musical theater album. The NewsHour’s chief arts and culture correspondent Jeffrey Brown spoke with its creator and star Lin-Manuel Miranda about his writing process for the musical.

Read the entire list of winners (in bold) below.

Record of the Year

Album of the Year

Song of the Year

“The Silver Lining: The Songs of Jerome Kern,” Tony Bennett and Bill Charlap
“Shadows in the Night,” Bob Dylan
“Stages,” Josh Groban
“No One Ever Tells You,” Seth MacFarlane
“My Dream Duets,” Barry Manilow (and Various Artists)

“We’re All We Need,” Above & Beyond featuring Zoe Johnston
“Go,” the Chemical Brothers
“Never Catch Me,” Flying Lotus featuring Kendrick Lamar
“Runaway (U & I),” Galantis
“Where Are U Now,” Skrillex and Diplo with Justin Bieber

“Ego Death,” the Internet
“You Should Be Here,” Kehlani
“Blood,” Lianne La Havas
“Wildheart,” Miguel
“Beauty Behind the Madness,” the Weeknd

“Whatever the Road,” Jason Crabb
“How Can It Be,” Lauren Daigle
“Saints and Sinners,” Matt Maher
“This Is Not a Test,” Tobymac
“Love Ran Red,” Chris Tomlin

“And Am I Born to Die,” Béla Fleck and Abigail Washburn
“Born to Play Guitar,” Buddy Guy
“City of Our Lady,” the Milk Carton Kids
“Julep,” Punch Brothers
“See That My Grave Is Kept Clean,” Mavis Staples

“An American in Paris”
“Fun Home”
“Hamilton”
“The King and I”
“Something Rotten!”

Arrangement, Instrumental or A Cappella

Producer Of The Year, Non-Classical

Producer Of The Year, Classical

Left: Kendrick Lamar accepts the award for Best Rap Album for "To Pimp A Butterfly" at the 58th Grammy Awards in Los Angeles, California on Feb, 15, 2016. Photo by Mario Anzuoni/Reuters