This photographer chronicles what gun violence looks like, for those who survive

Photographer Kathy Shorr’s daughter was 16 months old when they were robbed at gunpoint in Shorr’s New York City apartment. The robbers stole cash and personal items; Shorr and her daughter weren’t injured. But it was an experience Shorr would not easily forget.

“Once you have a gun pointed at you and you see that the person pointing the gun controls your life — and [the life of] whoever is with you, the person you love the most — it stays with you and does not go away,” she said.

Now, several decades after that robbery, as gun violence dominates headlines — just yesterday, a school shooting in California left two dead — Shorr has photographed 101 survivors of gun violence across America, many in the locations where they were shot.

Her project, made into the book SHOT: 101 Survivors of Gun Violence in America,” includes survivors from across a wide range of races, ages and locations, highlighting how ubiquitous gun violence has become.

Last week, Shorr spoke to NewsHour from New York, where she still lives, about the project, what she learned about gun violence from doing it and the politics that surround guns in America today. This conversation has been edited lightly for clarity. See more of Shorr’s photos below.

FLOCK: How did this project start?

SHORR: Being robbed at gunpoint was part of it. It was a while ago, but it’s still there. It’s part of your history. But there were also things I began to wonder about people who survive gun violence, who can be forgotten and not thought about. I used to teach high school photography, and I would see kids coming in with memorial cards around their necks, [honoring] kids and family who died of gun violence. And I thought: what about these other forgotten people who survived? What are they thinking? Because they’ve experienced this thing that has polarized so many people. I thought they would be the people to talk to about gun violence.

FLOCK: Access to guns is such a polarizing issue. How did you think your photography can cut through that?

SHORR: I thought if I could put a human face to it, with human survivors of every race, age group, [who were] geographically diverse, with high and low profile shootings, it would help. Because when you hear someone got shot, it’s often as if that thought doesn’t have a face or name to it. I also wanted to photograph people where they were shot, so if people look and say: ‘None of these people are like me,’ they would look at the locations and say, “Oh, I go to the gym all the time, or Wal-Mart all the time. And it happened there.” It is normal, banal places where this happens, places where we all go on a weekly or daily basis.

FLOCK: Did this project change how you felt about gun violence?

SHORR: This project is not meant to say nobody should have guns. Guns are something that are part of American culture. And I think we have to learn how to work with that. My feeling is responsible gun owners are the ones who make this issue open up, because they see both sides of the issue. Many people in the book are gun owners. America is a really big country where not everybody has the same lifestyle. I think we have to talk about that instead of avoiding these conversations.

FLOCK: What did you find that surprised you while photographing so many survivors?

FLOCK: What did you learn about the people who commit gun violence?

SHORR: I learned that there an are awful lot of very crazy people in the world, who are angry, and will think nothing of shooting somebody. So many people can be provoked into doing horrible things. But on the other side of that, you see all these people who have gone through life-altering bad experiences, who are so generous and heroic and courageous and they are out there too, which I think kind of balances it out.

Below, Shorr shares the stories behind some of her photos. All photos from “SHOT: 101 Survivors of Gun Violence in America” by Kathy Shorr, published by powerHouse Books. 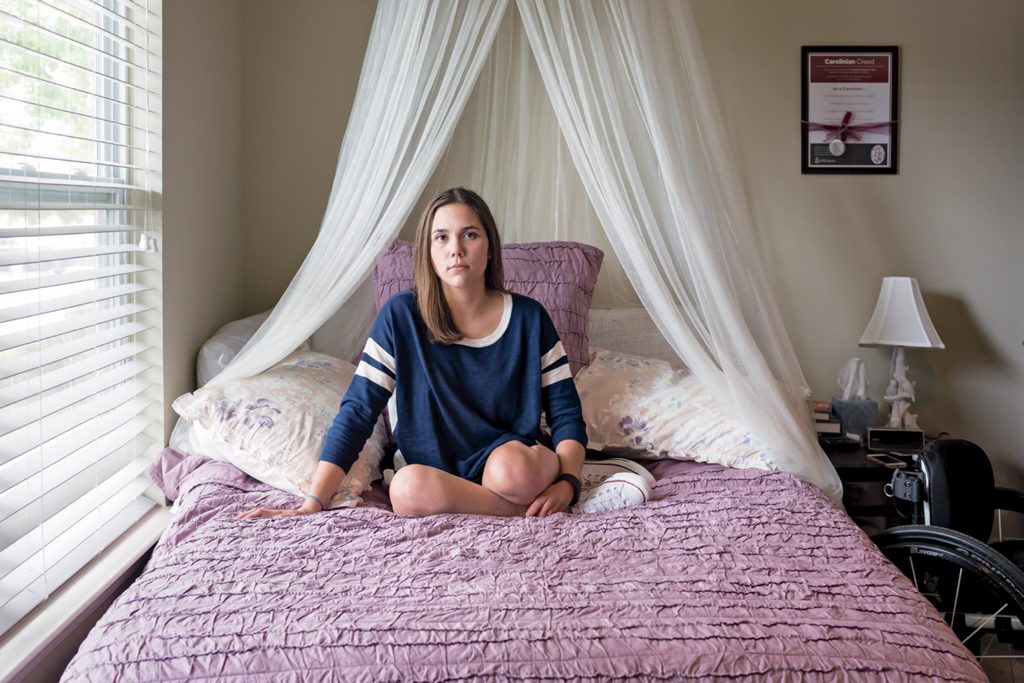 Martha Childress, a student at the University of South Carolina, was paralyzed when a gang member fired his gun as she and her friends were waiting for a taxi. Columbia, South Carolina, 2013. 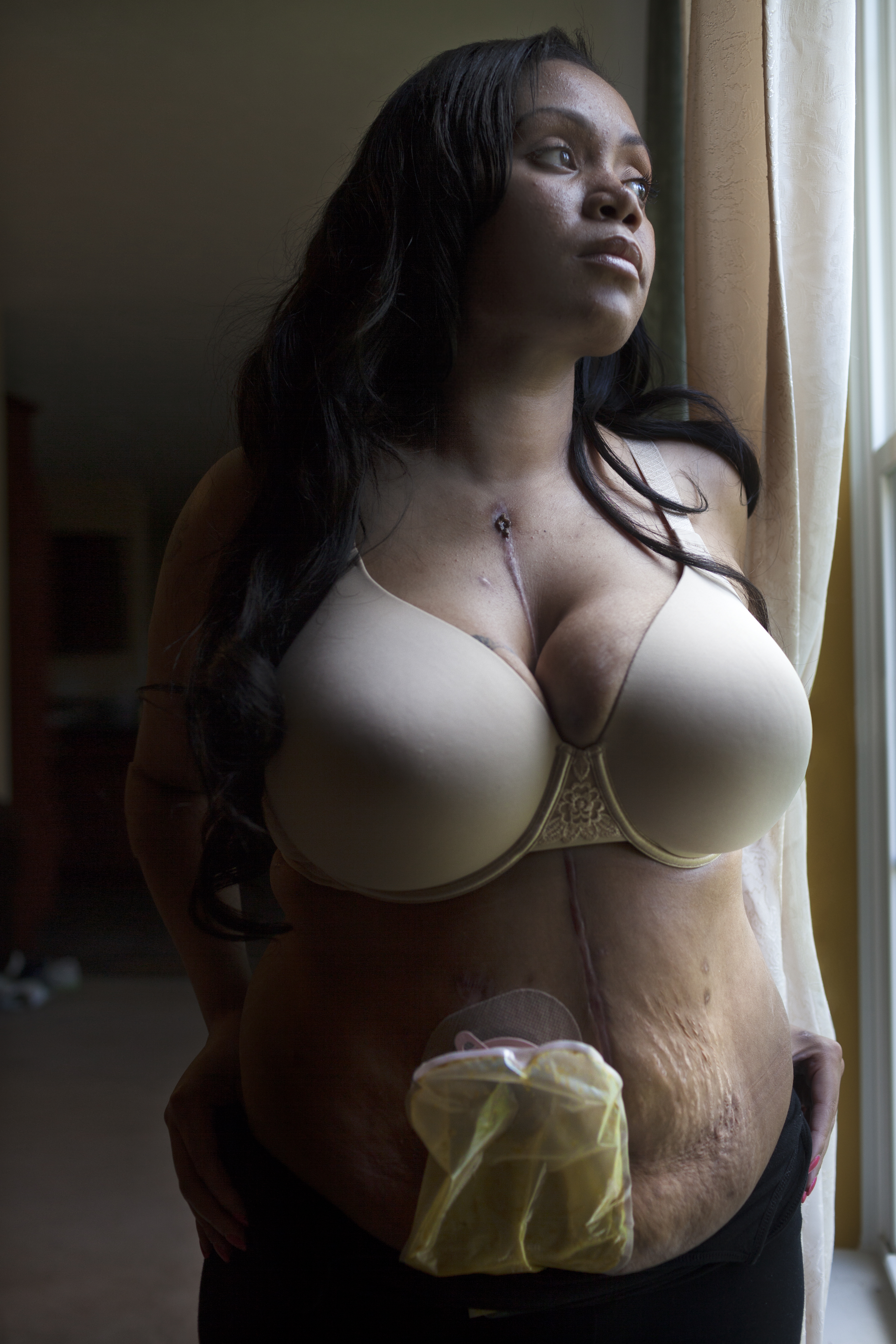 Ambushed by her ex-husband, Shirley Justice was shot as she picked up her daughters from nursery school. Her ex-husband used two guns and struck her 14 times. The former military man was released on $25,000 bail. This picture was taken six or seven weeks after she was shot. Indianapolis, Indiana, 2014. 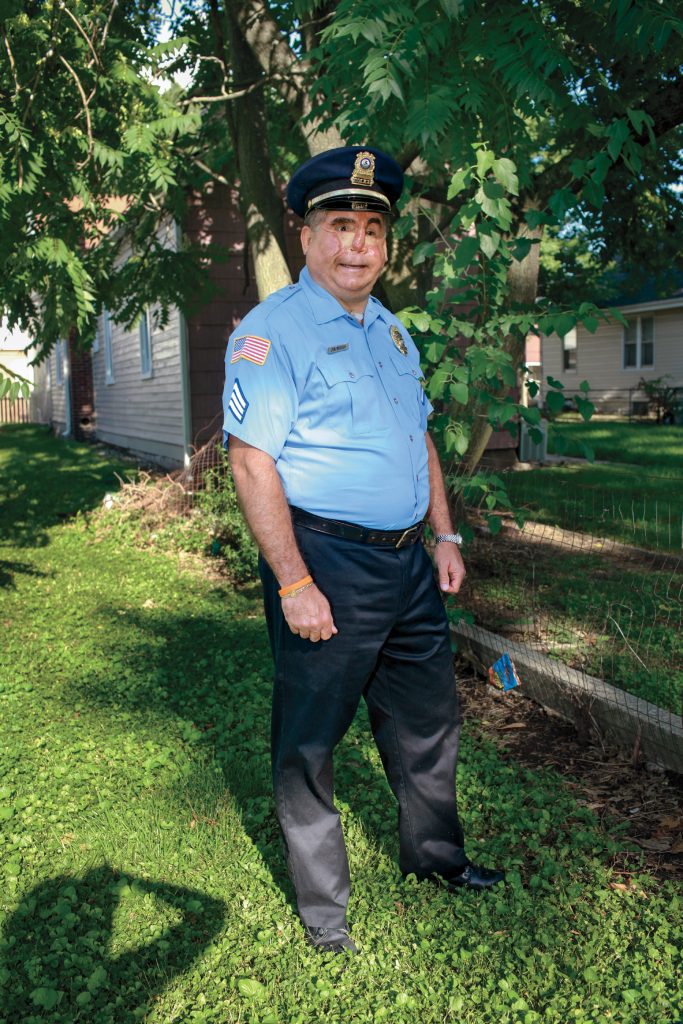 Police sergeant Jon Brough was hit in the face by a bullet from a man wanted by police for just murdering two people. The sergeant’s face shield malfunctioned and he was blinded by the bullet. He now breathes through a tracheotomy hole. Belleville, Illinois, 2006. 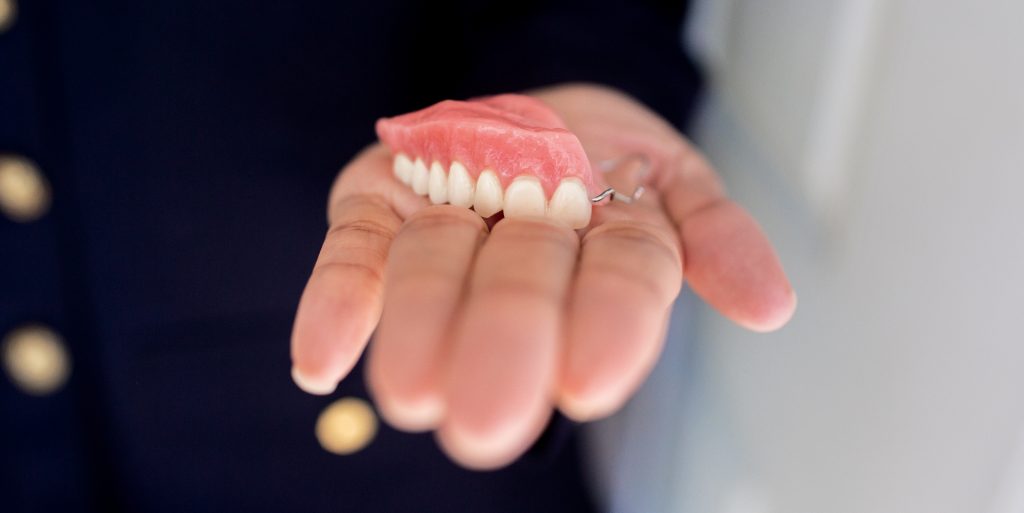 Janine Howard, a corrections officer, was accosted at home by her husband, a captain with the corrections department. He shot her after she told him that their marriage was over. Long Island, New York, 2013. 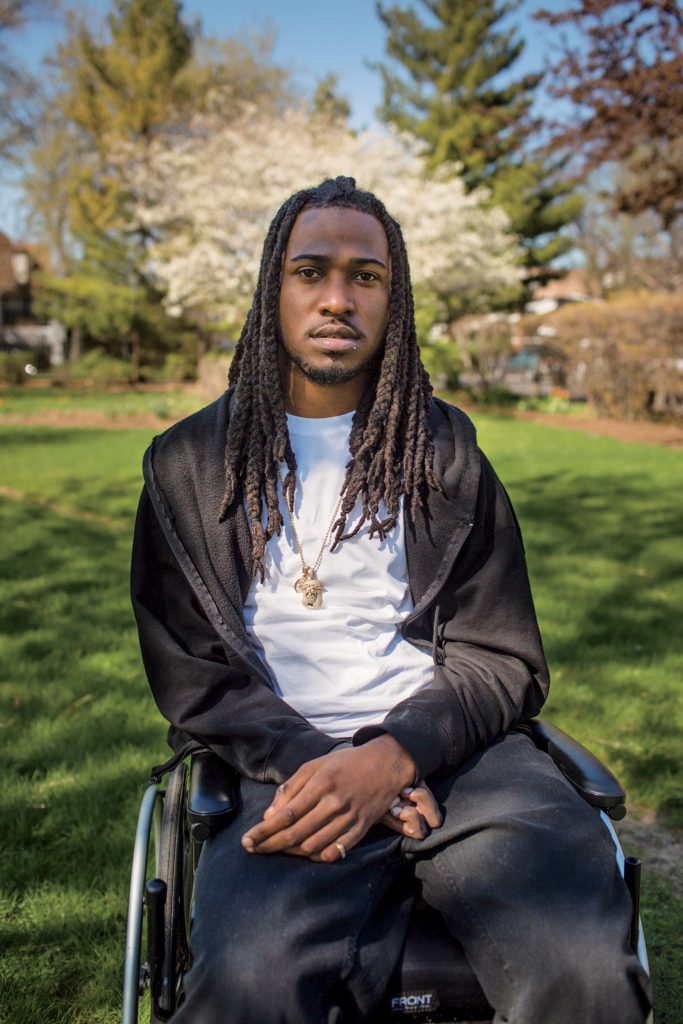 After an argument with a 14-year-old at a party, Ondelee Perteet was shot in the face when the boy returned with a gun. Perteet’s mother had to quit her job to care for him. Chicago, Illinois, 2009. 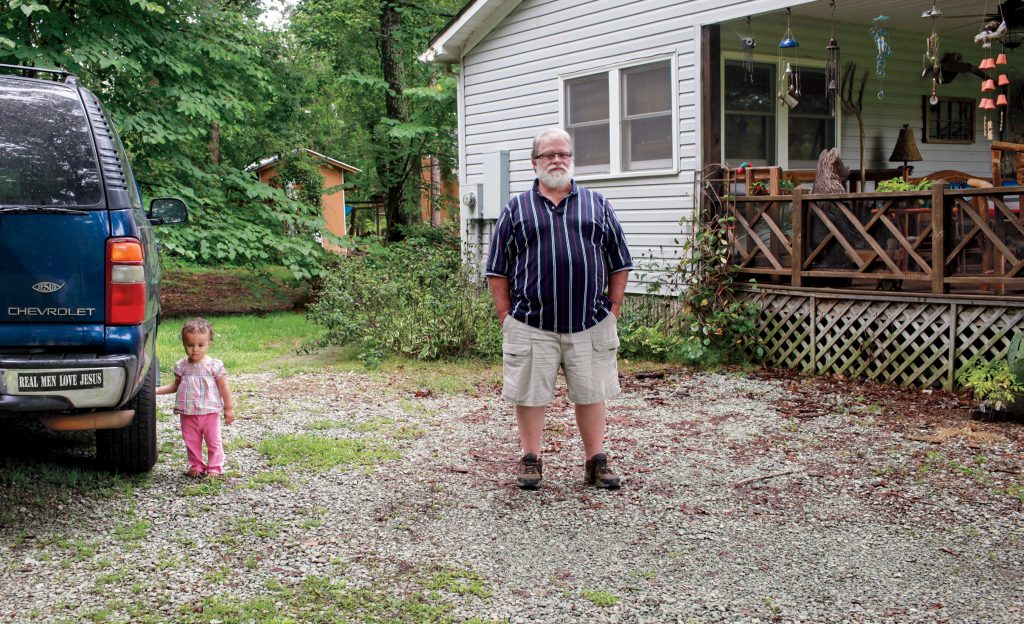 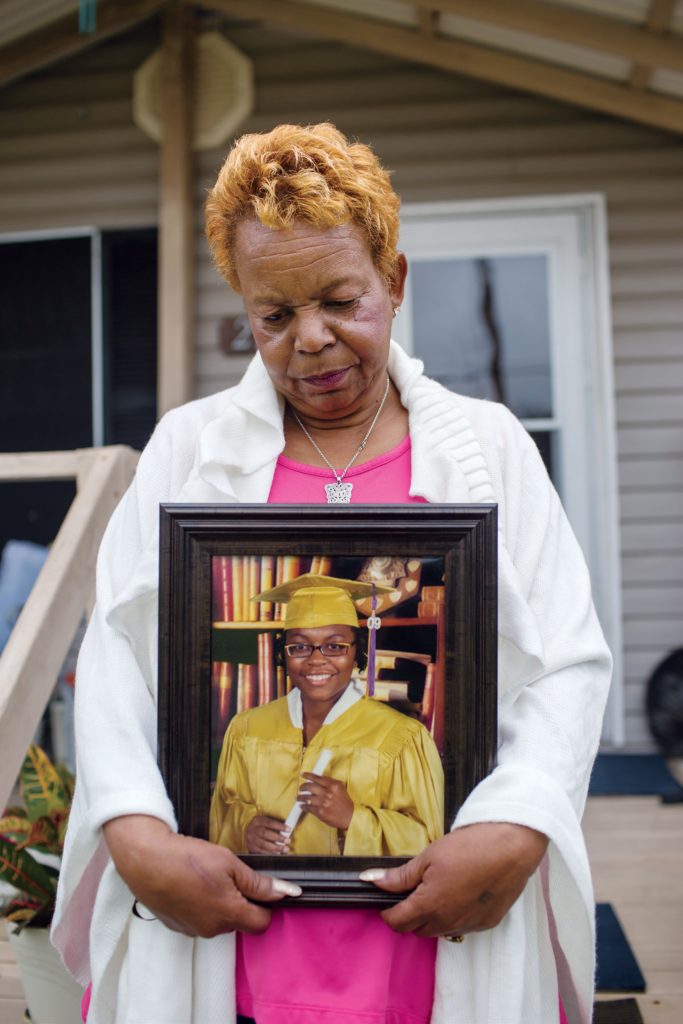 Social worker and domestic violence counselor Elizabeth Mahoney was shot three times in the face by her estranged husband. Her 18-year-old daughter was killed during the attack. Violet, Louisiana, 2009.

Above: SURVIVOR — Antonius Wiriadjaja was struck by a random bullet as he walked down a crowded Brooklyn street in 2013. The intended target was the ex-girlfriend of the shooter. Credit: From SHOT: 101 Survivors of Gun Violence in America by Kathy Shorr, published by powerHouse Books.