Long before starmarker Harvey Weinstein was ousted over accusations of sexual misconduct and assault — behavior that stretched back decades and affected dozens of women, first reported by the New York Times and the New Yorker — the Hollywood producer found time to defend big-name directors accused of sexual abuse.

In 2009, Weinstein circulated a petition calling for the release of Roman Polanski. The Academy Award-winning director at the time had been arrested in Switzerland and was facing extradition, two decades after he pled guilty in 1978 to unlawful sexual intercourse with a 13-year-old girl, and then fled to Europe to avoid more jail time in the U.S.

In an op-ed that year in the Independent, Weinstein wrote that he was “emailing everybody I know” to keep Polanski out of jail, and argued the filmmaker was a “humanist” who had been made into a “scapegoat.”

“This is a miscarriage of justice,” he wrote.

Weinstein added that he’d lobby then-California Gov. Arnold Schwarzenegger for help, a Hollywood actor who himself had been accused of groping multiple women on movie sets and studio offices without consent. (Schwarzenegger initially denied the allegations but later said he had a tendency to get “rowdy” and apologized to anyone he “offended.”)

In an interview not long after his Independent op-ed, Weinstein reiterated to the Los Angeles Times that he thought Polanski was misunderstood, as was the industry. “Hollywood has the best moral compass,” he said.

The petition Weinstein circulated to release Polanski was signed by numerous other film industry leaders and actresses, including Asia Argento, an Italian actress and director who said this week that Weinstein once forced oral sex on her. 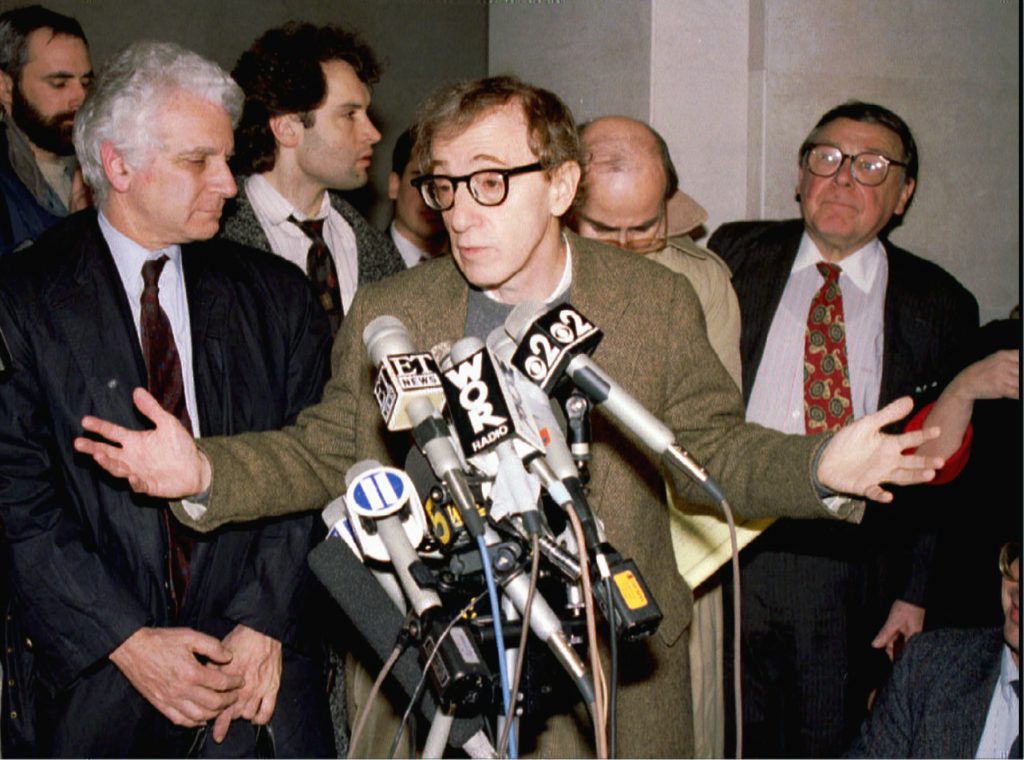 Director Woody Allen reacts to reporters questions at an impromptu press conference at Manhatten Federal Court January 12, 1993, after Allen appeared at a hearing on the custody of his children following the breakup of his relationship with actress Mia Farrow. Credit: Reuters

The petition was also signed by Woody Allen, a director who had been plagued by allegations of sexual misconduct. In 2003, Allen’s ex-wife Mia Farrow alleged that the filmmaker sexually abused his adopted daughter Dylan Farrow. Dylan also later asserted that Allen abused her. Charges were never filed, and Allen denies it happened.

It turns out that Weinstein helped out Allen at the time, too. In 1994, fresh off of Farrow’s allegation, Allen “was shunned by Hollywood’s movie community,” the LA Times wrote, but his career was rehabbed with the help of Weinstein.

(Ronan Farrow, Farrow and Allen’s 29-year-old son, was the reporter who broke some of the more serious allegations against Weinstein in the New Yorker this week. Farrow is estranged from Allen.)

The LA Times reported that Allen’s deal with the studio TriStar Pictures had been cut off prematurely, and his future looked uncertain. Then Weinstein’s company Miramax signed him. “Shunned by Hollywood means nothing to Miramax,” Weinstein told the paper. “We’re talking about a comic genius.”

The Allen film Miramax took on in ‘94, “Bullets over Broadway,” went on to receive seven Academy Award nominations and win one. The Weinstein Company, the production company that succeeded Miramax, distributed many more of Allen’s movies.

On Wednesday, after some two dozen women had come forward to make sexual misconduct allegations against Weinstein, including A-list and lesser-known actresses, the Mercury News asked whether the careers of other accused Hollywood men, including Polanski and Allen, could survive the renewed attention to sex abuse in the industry.