Helping Where ‘There Are More Cell Phones Than Toothbrushes’ 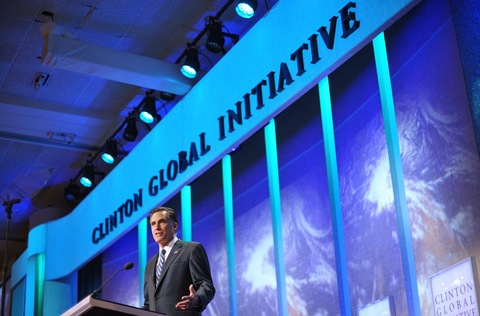 Republican presidential candidate Mitt Romney was one of the speakers at the Clinton Global Initiative meeting in New York City. Photo by Mandel Ngan/AFP/Getty Images.

NEW YORK CITY | The annual Clinton Global Initiative is intended to bring together people with ideas, people with money and, with former President Clinton as lead, people with power to persuade — both President Obama and Mitt Romney spoke Tuesday.

Social entrepreneurs, activists and agencies for various global humanitarian causes and leaders of corporations like Walmart, Procter and Gamble, and Unilever have all gathered here. The companies often choose the CGI to announce major social commitments. For example, Dow Chemical announced a partnership with the Acumen Fund to help scale up small businesses that serve the poor in Africa and south Asia.

Many of these multinational organizations have huge market stakes in the so-called bottom of the pyramid; the same impoverished populations served by the non-profit and non-government aid groups here. Both sides have pledged to find more ways to work together to help the poor, but the divide and distance they must cross can seem daunting. Take a breakfast meeting hosted by Western Union. The company used it to announce a service to help the non-profits streamline their payrolls in distant countries.

For many Americans, Western Union seems as obsolete as the telegram it was best known for. However, for many people in the developing world, Western Union is more ubiquitous than McDonald’s, perhaps even Coca Cola. Its 550,000 outlets allow diaspora communities in rich countries to send money to loved ones in 200 countries. It is very profitable, and it takes solid profitability to serve populations far beyond the reach of established banking systems, CEO Hikmet Ersek said.

Western Union said it wants to go further to improve financial education so that the billions it helps transfer can be better used. When the money arrives, he said company research shows that in many countries “they’ll party” instead of investing.

But Muhammad Yunus, founder of Bangladesh’s Grameen Bank, which serves more than 6 million poor women, said the challenge is not a lack of education but banking facilities. About 2.6 billion people worldwide have no access to any formal financial system.

“If the money comes in and right in front of me is a pub, I’ll celebrate,” said Yunus, painting a scene outside a typical Western Union outlet. What if there was a building where people instead were invited to open savings accounts, he wondered.

“People, given the options will always do the right thing,” the Nobel laureate added.
Those in the room all seemed to agree that technology could provide solutions, chiefly moving money through mobile phones. Susy Cheston of the group Accion International noted there are now more cell phones than toothbrushes in the world. And the technology has become increasingly familiar in recent years. Yet there persists a lack of access to reliable affordable service and perhaps a lack of trust.

In South Asia and South America, 96 percent of his customers “want cash in their hands,” said Western Union’s Ersek. In Africa, it’s 99 percent.

Would Western Union be willing to share its extensive market research, which could yield insights into such reticence and perhaps lead to a breakthrough, one social entrepreneur asked the company?

This, it became clear, would have to be a very long conversation between the two cultures gathered in the room. In one: live activists looking for the best ideas and practices in an open-source world. In the other: a for-profit world in which intellectual property is key to a shareholder-owned company’s very viability.

“That would require a drink first” to start such a conversation, Western Union marketing executive Paul Foster joked. And it was just breakfast time, he said.

Watch our two-part NewsHour report on Kenya, where private capital is helping:

See all of our Social Entrepreneurship stories.