Making Sense: ‘Hey Paul: Do Something Useful For Once’

Question: Hey Paul, Do something useful for once.

Prove you’re a “real” journalist and interview CEOs who already manufacture here in the U.S. and do so in the face of conventional wisdom.

You could start by picking a few examples of all kinds of different industries. How about goose down sleeping bags? Did you know Western Mountaineering in San Jose has been manufacturing an extremely high quality line of goose down sleeping bags for many years? It was founded by Jeff Jones and Gary Shaezlein. Here’s a story by Pete Gauvin (Getting Down in Silicon Valley, July/August 2006)

There are many companies in the U.S. who have found a successful manufacturing niche. This is just one example.

Sorry about my tone. I’m still ticked off by your old interview with Jack Welch of General Electric. I thought you were way too easy on him. And I’ve been reading the Times story about the corporate taxes and GE and I’m not in a good mood. 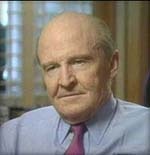 Paul Solman: We’ve been working on one such story, Jerry, a little further down the coast. For what it’s worth, I’m still embarrassed by the Welch interview myself, though when I read it over, less embarrassed than at the time. My only excuse is that Welch claimed we’d gotten him on false premises and hadn’t told him the subject was CEO pay. He may well have been telling the truth; it wasn’t I who made the call.