Honored for songwriting, Motown legend Smokey Robinson proves he really got a hold on pop music

The Library of Congress honored Smokey Robinson in a tribute concert, awarding the soul legend with the Gershwin Prize for Popular Song. PBS stations nationwide will air the event tomorrow, Feb. 10, 2017. Check your local listings.

Smokey Robinson was honored this week for his miraculous contribution to the American songbook, more than 4,000 songs, including pop classics like “My Girl.”

The Library of Congress awarded the 76-year-old Miracles frontman and singer-songwriter its Gershwin Prize for Popular Song at a ceremony in the nation’s capital Wednesday night. The award honors Robinson’s unparalleled career producing lasting Motown records.

In his acceptance speech, Robinson said it was “unbelievable” to be mentioned in the same breath as George and Ira Gershwin, a songwriting team that ceremony host Samuel Jackson earlier referred to as “eternally cool brothers.”

“This is such a wonderful, spectacular, incredible night in my life. I’ve had many of them, and this is right at the top of the list,” Robinson said.

The Detroit native said he was exposed to a “great dose” of music growing up in a city where Aretha Franklin, Diana Ross and the Four Tops were all neighborhood friends. Everything from “gutbucket blues” and gospel to classical and jazz and standards by the Gershwin brothers could be heard in his childhood home.

“I tell people that the Gershwins were writers when the song was king.” Robinson told the NewsHour a day before the ceremony. “When they wrote a hit song, all of the popular artists of that day recorded that song,” he added.

The audience sang and clapped along to “My Girl,” the night’s show closer, as a testament to Robinson’s enduring compositions. The pantheon of pop music is overstuffed with artists loving and longing, and yet, “My Girl” sticks out.

All the night’s performers, including CeeLo Green, Ledisi, Tegan Marie, Esperanza Spalding, BeBe Winans, among others, joined Smokey Robinson on stage for an ensemble performance of The Temptations “My Girl,” a song Robinson co-wrote. Video by PBS NewsHour

Acting Librarian of Congress David Mao announced Robinson’s award and called him a “musical legend,” citing his contributions to music as a singer, songwriter, producer and record executive.

“His rich melodies are works of art — enduring, meaningful and powerful. And he is a master at crafting lyrics that speak to the heart and soul, expressing ordinary themes in an extraordinary way,” Mao said in a statement. “It is that quality in his music that makes him one of the greatest poetic songwriters of our time,” he added. 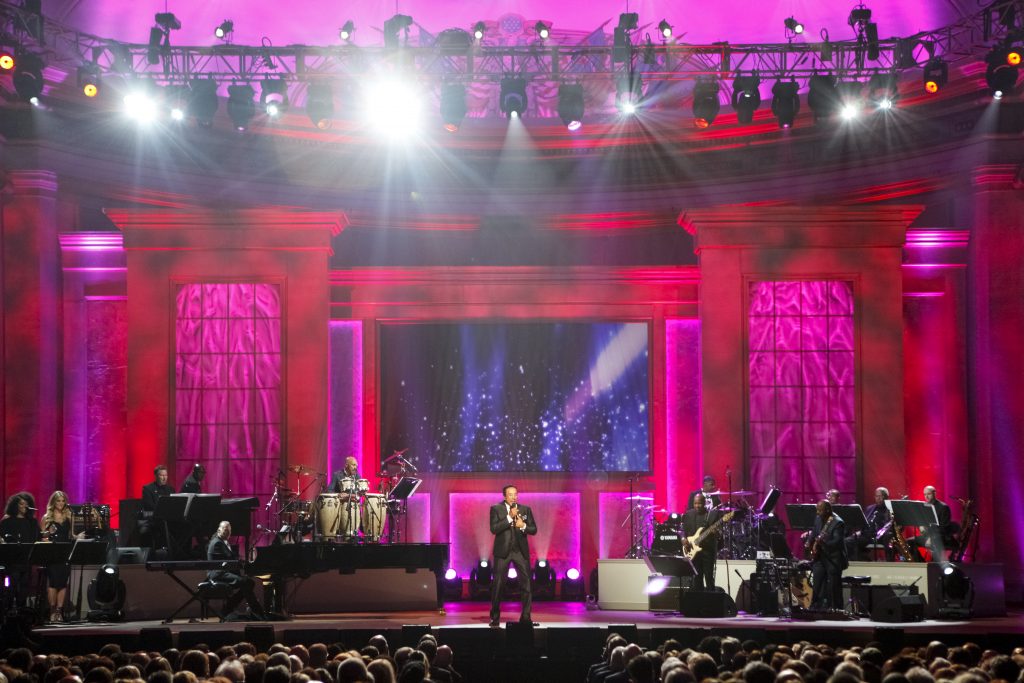 Throughout Robinson’s five-decade career, he has been a Top 40 machine. By 1970, he produced more than 25 hits with the Miracles, including “I Second That Emotion,” “Ooo Baby Baby” and “You’ve Really Got a Hold on Me.”

Two of the crooner’s eye-watering ballads — “The Tracks of My Tears” and “The Tears of a Clown” — have been covered by generations of singers, cross-pollinated by artists in different genres.

“Smokey was always a great poet who expressed ordinary themes in extraordinary ways,” Motown founder Berry Gordy said of his friend and collaborator of 50 years.

It’s easy to underestimate the simplicity of Robinson’s lyrics. Sung in his trademark high tenor, there’s the emotional pleading embedded in how he tells a wronged lover that “I’m cryin.” This is all right before the falsetto “ooh”s, in the hook of the song, that grow increasingly desperate.

“My theory of writing is to write a song that has a complete idea and tells a story in the time allotted for a record. It has to be something that really means something, not just a bunch of words on music,” Robinson said in a 1968 Rolling Stone interview.

He wrote comic analogies like, “The way you swept me off my feet, you know you could have been a broom” in The Temptations’ “The Way You Do The Things You Do.” The simple rhyming scheme of “sad/bad/glad” in “Tears of a Clown” doesn’t undermine the heartbreak at the core of the song.

And when underground hip hop producer and fellow Detroiter J Dilla sampled a lesser known Miracles song, he excised Robinson’s wordless harmonizing from “A Legend In Its Own Time,” a go-for-broke declaration of love.

Robinson has also credited Gordy with fine-tuning his songwriting talent. In 1957, after the Miracles failed an audition, they managed to pique Gordy’s interest.

“We had a book of about 100 [songs] I had written, and he liked only one, but he didn’t just say the rest were garbage,” Robinson told Rolling Stone in 1968. “I must of went through 68 of those songs with this cat and on every one I’d say, ‘What’s wrong with this one?’ and he’d say, ‘Well, you left off this or you didn’t complete your idea on that,’ which really started me to think about songs and what they were. Gordy, man, that cat more than anyone else helped me get my thing together.”

Together, Gordy and Robinson defined the Motown sound. Robinson would remain the record company’s vice president into the late 1980s, years after he decided to go solo.

Robinson told the NewsHour that the easiest songs would take 25 minutes to write at most. “Shop Around” took less than half an hour.

But 1979’s “Cruisin,'” one of Robinson’s most successful solo numbers, took five years to write. Robinson said the titular word, also found in the chorus, remained elusive to him. It wasn’t “sensual or sexy” enough to match Marv Tarplin’s guitar riffs.

“So I came up with the word cruisin’ because cruisin’ is your own interpretation. It’s whatever you think it is,” he told the NewsHour.

Wednesday night, Jackson joked that Robinson’s music could “bring the country together.” “It’s like bipartisan karaoke over here,” he added, in front of a Washington, D.C. crowd embedded with Republican and Democratic lawmakers.

“My Girl” is barely a three-minute song. It may have been brief, but Robinson’s falsetto appeared to rise above the fray.