Jason and Rachel Hallett were eighth-grade sweethearts in Colorado, but their early romance didn’t last. Her parents didn’t approve, and so the teens went their separate ways.

But nearly a decade later, Rachel heard from Jason again on Facebook. “He sends me this friend request a couple years after I had kinda given up,” she says. “And when I saw what had happened, I just started crying.”

What Rachel saw were photos of what a homemade bomb laid by the Taliban had to done to Jason. After 9/11, he’d enlisted in the Marine Corps and, while on patrol in Afghanistan, he stepped on an explosive that destroyed both his legs, most of his right arm, and part of his left hand.

Jason’s Facebook request led to phone calls and then to a hospital visit. Their relationship took off. When they were apart, they would video chat late into the night, sometimes falling asleep with the line still open. They’d wake up the next morning and pick up where they’d left off. Soon they were married.

I met Rachel and Jason two years ago when NewsHour producer Quinn Bowman and I were reporting a story about how the U.S. Department of Veterans Affairs wouldn’t cover in-vitro fertilization (IVF) for wounded veterans. (Back in the 1990s, Congress had passed a bill that blocked the VA from paying for these services. There were concerns over the costs, which are estimated to be roughly $500 million over five years to cover the approximately 1,800 veterans who might require IVF. Pressure was also reportedly exerted on Congress by anti-abortion groups who disapprove of IVF.)

At the time, Jason and Rachel wanted very much to start a family, but because shrapnel from the explosion remained lodged in his testicles, costly IVF was their only way to get pregnant. The young couple said they could probably afford one IVF attempt, but would need to take out loans if the first try failed.

“When someone goes off to fight a war for us, a man or a woman, we have an obligation to make them whole again, as whole as we can.”

As we reported in 2015, Senator Patty Murray (D-WA) had introduced a bill to allow the V.A. to cover IVF for wounded veterans, but it never got a full vote in the Senate.

“To me, when someone goes off to fight a war for us, a man or a woman, we have an obligation to make them whole again, as whole as we can,” Murray said.

At the time, Jason expressed frustration with Congress’ inability to solve this problem. “I don’t regret joining the Marine Corps, but the simple fact is that they told us that we’d be taken care of us if we got injured,” says Jason. “I guarantee that if it was a Congressman’s kid… they would be doing everything they can to make it happen.” 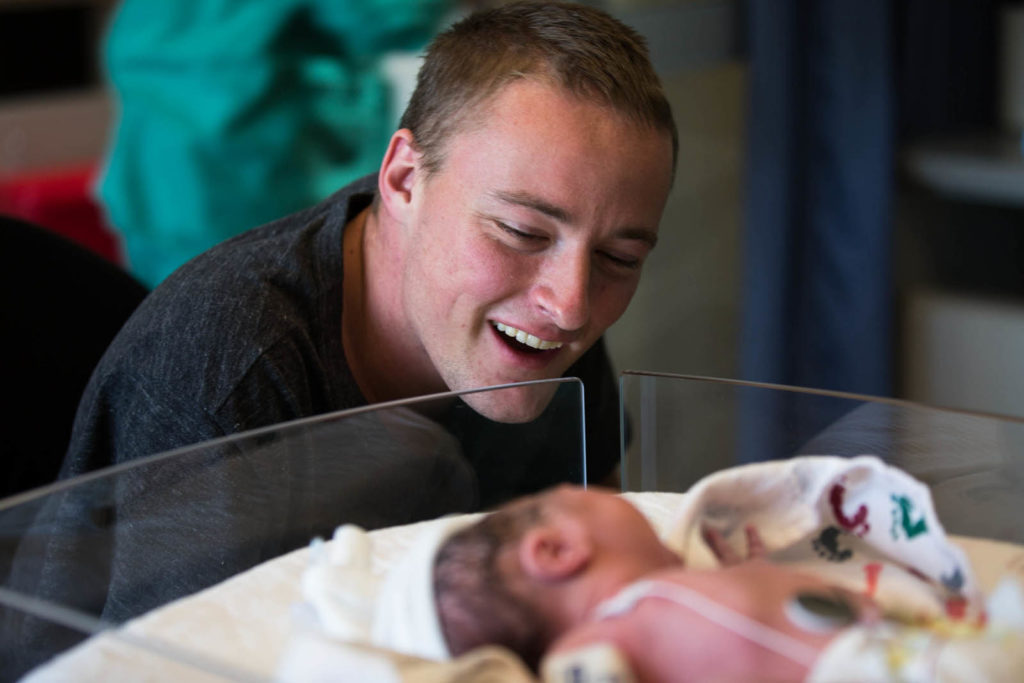 Soon after our story aired, a young photographer named Kirsten Leah Bitzer began photographing the Halletts. Two years ago, Bitzer was a photography student looking for a long-term project when she happened to meet Jason and Rachel. The young couple agreed to let Bitzer follow them through the intimate, complicated in-vitro process, as well as Jason’s ongoing care at the V.A. As you can see in her series (and in the video below), Bitzer documented the whole emotionally exhausting process, but also showed its triumphant outcome: the birth of their twins, Jason Jr. and Marina.

One additional update: Senator Murray’s bill still hasn’t come up for a vote, but last December, Congress did authorize the V.A. to pay for IVF services for wounded veterans. That authorization has to be renewed every two years, and Senator Murray continues to push for a more permanent solution.

Left: Rachel Hallett helps her husband, Jason Hallett shave before the Marine Corps Ball on Oct 31, 2015 in Sonoma, Calif. Jason was injured when an explosive in Afghanistan destroyed both his legs, most of his right arm, and part of his left hand. Photo by Kirsten Leah Bitzer