How do you spot Alzheimer’s? Neuroscientist, author behind ‘Still Alice’ explains

“Still Alice” author Lisa Genova, who has her PhD. in neuroscience, writes about families coping with neurological diseases or disorders, which she says are often “ignored, feared or misunderstood.” Watch her interview with Jeffrey Brown on tonight’s PBS NewsHour.

In Lisa Genova’s bestselling novel “Still Alice,” a linguist with early-onset Alzheimer’s navigates her symptoms with her husband and three adult children. The book has raised awareness about the disease and its film adaptation is getting its own spotlight during this year’s Oscar season.

But Alzheimer’s disease, which affects 5 million Americans and their families, still has no known cure. Genova, who is also a neuroscientist, joined Jeffrey Brown to discuss the disease’s symptoms and how different people react to them.

Here is an excerpt from their conversation. Watch more with Genova on tonight’s PBS NewsHour.

Jeffrey Brown: How do you recognize the symptoms of someone with Alzheimer’s, someone around you? And what do you do?

Lisa Genova: Okay, well this is what everyone’s terrified of, right? Because you’ve probably within the last day or two, walked into a room and thought “Why did I come in here?” or “Where are my keys?” or “Oh, what’s his name?” So that tip of the tongue “Oh, what’s his name?” The average 25-year-old experiences that three to four times a week and that does increase as we age. And yet with Alzheimer’s, it’s something slightly different.

So the signs are like, you can’t remember the name, and then you don’t have the first letter, you don’t have the number of syllables. It doesn’t then just pop into your head an hour while you’re driving down the street. It’s not going to come on the tip of your tongue ever. Keys, you can’t find the keys and when you do, you don’t remember what they’re for. Or you find them and they’re in the refrigerator or somewhere strange.

Most of us, when we can’t find our keys, it actually isn’t a memory problem, it’s an attention problem. You’re doing five things at once and you never actually paid attention to where you put them in the first place. So you start experiencing memory impairments that’s really drastically different from the kinds of memory impairments than the kinds we’re used to. And you recognize that.

Jeffrey Brown: Is there any point where you say to yourself, “Now I must go see a doctor or get tested?” What did you find?

Lisa Genova: Well for everyone, it’s different. A lot of the people that I met with early onset who were like Alice, knowing you’re lost in a place that looks familiar. This is a place I’ve been to a hundred times or a thousand times or my whole life.

And the words just drop out. Something that’s so out of the norm for you, is usually when the conversation starts to get real. And for someone young, it’s usually not a straight and narrow path to diagnosis because there are other things that can cause dementia and memory impairment and cognitive problems and you want to rule those treatable causes out first.

Jeffrey Brown: And what about family members seeing someone or watching someone? What did people tell you that you talked to? And what did you see yourself?

Lisa Genova: I think this is such a hard thing to face. Internally, you know what’s going on better than anyone else. I know that my grandmother probably knew that she had Alzheimer’s before we did. She was just… she wasn’t a complainer. And she was tough and very intellectually agile. So she moved around her symptoms in very sort of creative ways for a long time.

I think people surrounding someone with Alzheimer’s, the people I’ve seen and had experience with, don’t push the process forward. They’re happier to retreat and be in denial or look the other way. No one wants this to happen to anyone that they love.

Brown also talked to Genova on what inspires her fiction.

Jeffrey Brown: You’ve continued writing other works that pick up on the theme of understanding disease and what’s happening around us in our lives through fiction.

Lisa Genova: Yeah, so my training’s in neuroscience, which is kind of a bizarre thing for a novelist. So I’m using that and it’s absolutely what I care about and am passionate about. So I write stories that are accessible, about people living with neurological diseases or disorders that are ignored, feared or misunderstood. 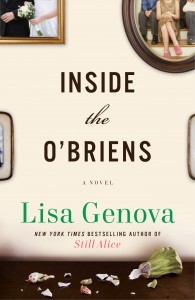 Lisa Genova’s fourth book, “Inside the O’Briens,” comes out in April.

Lisa Genova: The book that’s coming out in April is called “Inside the O’Briens.” It’s about a blue collar, Irish Catholic family from Charlestown, Massachusetts, dealing with Huntington’s Disease. So Huntington’s is a neurodegenerative disease. It’s 100 percent genetic, so if mom or dad have it, each kid has a fifty-fifty shot of getting it. I was 22 years old in a neuroscience lab in the Charlestown Navy Yard when the lab down the hall in February of ‘93 when all these nerdy neuroscientists start screaming and yelling and celebrating. They had just isolated the genetic mutation that causes Huntington’s Disease.

Lisa Genova: And I remember sort of being still and getting that full-body chill and knowing that I was witnessing a historic moment in science and thinking, “My God, they’re gonna cure this disease.” Because it’s the only thing that causes it. And we’re 22 years later and there’s still no treatment and still no cure. Part of the issue is that there are only about 33,000 people in the U.S. that have this. So it’s called an orphan disease. If you’re a drug company, and you could go after Alzheimer’s, which has 5 million Americans or Huntington’s that has 30,000, what do you put your investment in? And yet only one thing that causes it. So it’s called the most curable incurable disease. So, I wrote this book in part to raise some awareness and urgency around this disease that isn’t paid attention to.