When Margaret Atwood first published “The Handmaid’s Tale” in 1985 — which imagines a near-future totalitarian theocracy in America in which women were subjugated through assigned roles to men — she also imagined, in vivid detail, the costumes that her female characters would wear.

The so-called “Wives” would be in blue. The “Aunts” in brown. The “Marthas” in green. And the “Handmaids” at the center of her story, whose job is to bear children for the Wives, in a deep red-colored dress, like a nun’s habit, and white bonnets, called “wings,” around their heads.

Now, those costumes and the speculative fiction novel are being brought to life through a TV adaptation premiering this week on Hulu — which many have said bears striking parallels to the present. Last week, Atwood and the actress Elisabeth Moss, who plays the novel’s main character, the Handmaid Offred, sat down with NewsHour correspondent Jeffrey Brown and shared more about the meaning behind the costumes.

READ MORE: In dystopian ‘Handmaid’s Tale,’ a warning for a new generation not to take rights for granted 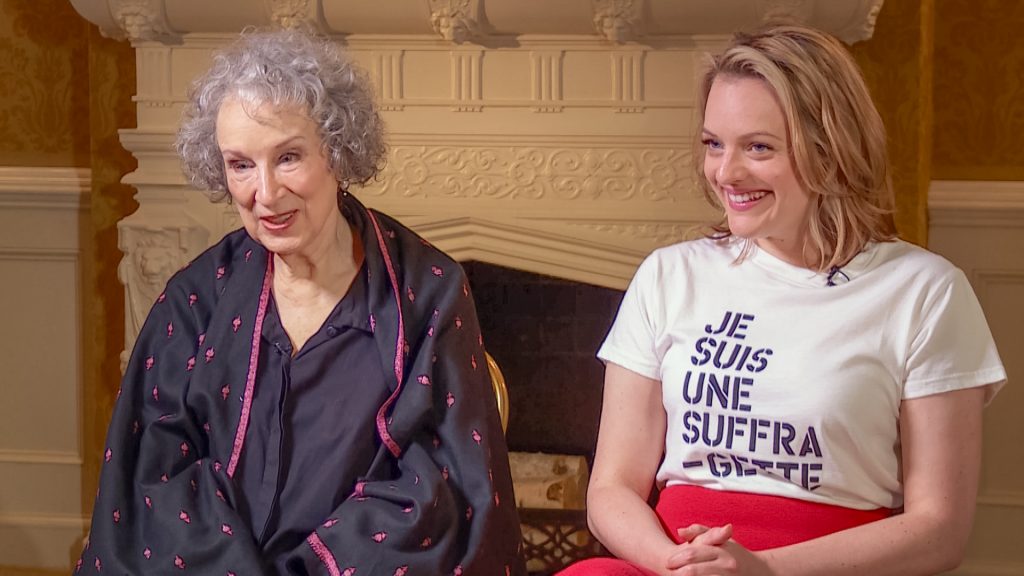 The deep red color, Atwood said, came from various places. For one, “German prisoners of war held in Canada [in WWII] were given red outfits because they show up so well against the snow,” she said. (In “The Handmaid’s Tale,” some Handmaids try — and fail — to escape Gilead, the hierarchical regime under which they live.)

Red was also the color of “medieval, early renaissance painting,” Atwood said, and the color worn by Mary Magdalene — who is often remembered, many would say mistakenly, as a fallen woman.

“On the other hand, red is the cross and red is blood,” Atwood said. The cross, because the Handmaids’ lives are circumscribed by a Puritan-esque theocracy, and blood, for the childbirth the women are forced to endure for the male ruling class.

Moss, who wore a red skirt and a T-shirt that said “je suis une suffragette” (“I am a suffragette”) to the interview, said that for the TV adaptation, the colors “were so specifically generated.”

Costume designer Ane Crabtree kept working and working at the color, Moss said, until they came up with the perfect blood red.

Blood red is the shade Atwood originally envisioned, as her narrator, Offred, describes in the book early on: “Everything except the wings around my face is red: the color of blood, which defines us.”

As for the Handmaids’ white “wings,” which the narrator says in the book are “designed to keep us from seeing,” Atwood wrote in an introduction to the book’s new edition that she was inspired by the 1940s Old Dutch Cleanser packages, which show a woman in a face-obscuring bonnet; she remembers they scared her as a child.

The color white, she told NewsHour, while considered lucky in some cultures, is not seen that way in others; “widows in India wear white and that’s considered really quite unlucky,” she said. In the TV adaptation, the bonnets are also white, and act as blinders for the women.

In general, the costumes and colors were intended to reflect the hierarchy the women live in — symbolism of dress that is not without historical precedent.

“For a very long time, before people were literate, there were rules about who could wear what,” Atwood said. “By looking at a person you could see whether they were an aristocrat or what function in society they fulfilled.”

Watch “The Handmaid’s Tale” on Hulu starting Wednesday. And watch Jeffrey Brown’s full interview with Moss and Atwood, as well as with the series’ showrunner Bruce Miller and executive producer Warren Littlefield, here.

Left: "The Handmaid's Tale" stars Elisabeth Moss as Offred, a handmaid who must wear a red dress and white bonnet, to show her place in the hierarchy. Credit: Hulu