How this poet shows the way ‘racism hits the body’

Our July 2020 pick for the PBS NewsHour-New York Times book club is Claudia Rankine’s “Citizen.” Become a member of the Now Read This book club by joining our Facebook group, or by signing up to our newsletter. Learn more about the book club here.

In her book “Citizen,” the poet Claudia Rankine aims to show readers how Black people experience racism in their everyday lives. And to help tell that story, she reached out to visual artists.

“I’ve always felt that visual artists have been able to portray [how] racism hits the body in ways that were so succinct,” Rankine told the PBS NewsHour. “You just saw it, you understood it.”

Her goal was for “people to engage all of their senses in the book, from their sight to their reading skills to their body, so that these moments really sat inside them,” Rankine said.

One of the photos Rankine used was taken by the photographer Lawrence Beitler at a public lynching in August 1930 in Marion, Indiana. The photo shows white spectators gazing at the bodies of victims Thomas Shipp and Abram Smith, who had been arrested and charged for robbing and murdering a white factory worker, and raping his partner. The case was never solved. The original photo served as inspiration for “Strange Fruit,” a poem by Abel Meeropol and later a song by Billie Holiday.

With permission, Rankine’s partner John Lucas altered the photo by removing the bodies of the victims in order “to shift the perspective to the white participants.”

Rankine said this erasure made her think of Susan Sontag’s book “Regarding the Pain of Others,” which examines the use and meaning of images, in particular those that depict war and violence. In one section of the book, Sontag writes that public lynchings “force us to think about the extent of the evil unleashed specifically by racism.” 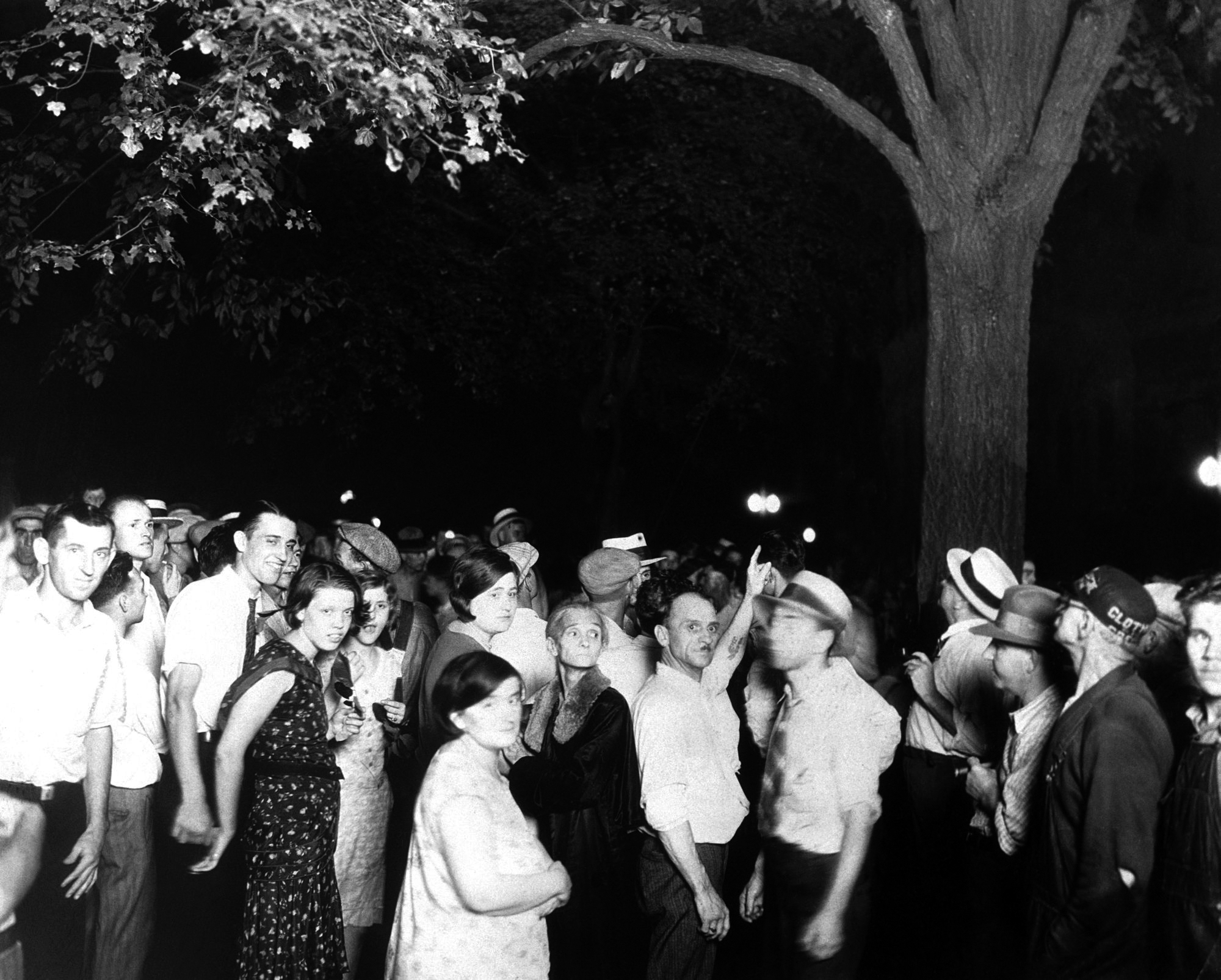 After being accused of murdering Claude Deeter, 23 and assaulting his girlfriend Mary Ball, 19 two young African-American men are taken from the Grand County Jail and lynched in the public square. Hulton Archive. August 30, 1930. Photo via Getty Images. Image alteration with permission by John Lucas.

Here are Rankine’s (and Sontag’s) insights about the photo:
This is a photo in which the lynched people were removed in order to shift the perspective to the white participants in the lynching — challenging the “spectacle” often made of Black suffering, often perpetuated in our news cycles. This erasure reverses the spectacle, highlighting the complicity of the “spectators.” When I see this photograph, I think of this passage from Susan Sontag (whose work I love) in which she neglects to mention lynching spectators as white, referring to them instead as “good churchgoing citizens.” We perhaps catch her irony, but her failure to identify the race of the spectators is telling.

An example: “a trove of photographs of black victims of lynching in small towns in the United States between the 1890s and the 1930s, which provided a shattering, revelatory experience for the thousands who saw them in a gallery in New York in 2000. The lynching pictures tell us about human wickedness. About inhumanity. They force us to think about the extent of the evil unleashed specifically by racism. Intrinsic to the perpetration of this evil is the shamelessness of photographing it. The pictures were taken as souvenirs and made, some of them, into postcards; more than a few show grinning spectators, good churchgoing citizens as most of them had to be, posing for a camera with the backdrop of a naked, charred, mutilated body hanging from a tree. The display of these pictures makes us spectators, too.” (From Susan Sontag’s “Regarding the Pain of Others”)

Left: Demonstrators raise their fists in a sign of solidarity on May 30, 2020 in Denver, Colorado while protesting the death of George Floyd, an unarmed black man who died while while being arrested and pinned to the ground by the knee of a Minneapolis police officer. (Photo by Jason Connolly / AFP)

Using poetry to uncover the moments that lead to racism