Our October 2020 pick for the PBS NewsHour-New York Times book club is Paul Tough’s “Helping Children Succeed.” Become a member of the Now Read This book club by joining our Facebook group, or by signing up to our newsletter. Learn more about the book club here.

When Paul Tough was first starting out as a self-described “young and uptight” reporter, he found it “distressingly hard to ask people questions that struck me as potentially awkward or personal.” 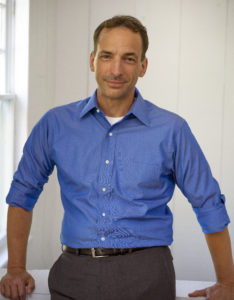 “It seemed rude, none of my business,” Tough recently told the PBS NewsHour. So he sought advice from a friend who is a legendary interviewer himself: Ira Glass, creator and host of the radio show “This American Life.”

“He explained that people, for the most part, wanted to tell their stories, and that the most respectful thing you could do as a reporter was to ask them the questions about their life that you genuinely found most interesting,” Tough said.

This advice opened him up as a reporter, and came in handy later down the line, when he had frank discussions with educators and policymakers for his books “How Children Succeed” and “Helping Children Succeed,” about the failures of early childhood education in the U.S. — and how it could be fixed.

Tough shares more about Glass’ advice and some favorite reads below.

What is your daily writing routine?

My writing routine is usually pretty scrambled, and when I wrote “Helping Children Succeed,” my wife and I had a newborn baby, which scrambled it further. We were living in Montauk, New York, and I had a little storefront office near the center of town, but I soon found I couldn’t get much writing done there. The internet and other distractions were just too tempting. So instead, every morning I would bicycle to the office, grab a yellow legal pad, and walk to a nearby coffee shop called Left Hand. It was the fall, and all the tourists had gone home, so most days I was the only customer. I mostly wrote the book there, in longhand, fueled by Irish Breakfast tea.

What is your favorite childhood book? Or one book you think everyone should read?

I loved reading when I was a kid, but my tastes were decidedly lowbrow: Hardy Boys mysteries, “Richie Rich” comics, Mad magazine. When I first started borrowing novels from the library, I used just one criterion: I would always choose books that were also movies. That seemed at the time an unimpeachable mark of quality. I didn’t really distinguish between the books that were actual novels adapted for film (“To Kill a Mockingbird,” “Carrie”), and the ones that were quickie novelizations of hit movies. I enjoyed and respected them equally. Forty years later, I can still remember specific lines from the novelization of “Close Encounters of the Third Kind.”

That advice opened me up as a reporter – and as a person, I think – to a more direct kind of communication.

Still, I don’t think it’s quite right to call that my favorite childhood book. So I’m going to opt instead for “Bread and Jam for Frances,” by Russell Hoban. It’s a beautiful celebration of individuality, family, and the importance of a nicely laid out lunch.

As for the book everyone should read? Without a doubt, the novelization of “Close Encounters of the Third Kind.”

What is something you’ve seen, watched or read that you think is overlooked and deserves more attention?

This past summer, when I, like a lot of white Americans, was trying to come to terms with America’s racism and my role in it, I watched on YouTube the 1965 Cambridge Union debate between James Baldwin and William F. Buckley. It’s a remarkable historical document; watching it now, it seems to be not just from another era but from another planet. But Baldwin’s performance is powerfully moving. In the cramped, formal setting of the Cambridge Union, this son of Harlem makes an angry and eloquent case for his place in the American story. Fifty-five years later, his words still resonate.

What is the best piece of writer’s advice you’ve received?

To ask every question that’s on your mind, however nosy. When I was just starting out as a reporter, young and uptight and Canadian, I found it distressingly hard to ask people questions that struck me as potentially awkward or personal. It seemed rude, none of my business. My friend Ira Glass, a legendary interviewer himself, counseled me to get over my reluctance, and quick. He explained that people, for the most part, wanted to tell their stories, and that the most respectful thing you could do as a reporter was to ask them the questions about their life that you genuinely found most interesting. That advice opened me up as a reporter – and as a person, I think – to a more direct kind of communication.

Can you describe the moment you knew you wanted to write this particular book? And when did you know it was over?

This book has an unusual history. I started writing it in 2014, a couple of years after the publication of my book “How Children Succeed.” That book had been well-received, but I worried that I hadn’t done enough in it to explain in a clear and accessible way to educators and practitioners what I’d learned about interventions that could help young people succeed. I originally set out to write a simple report – something I could offer readers on my website. But it grew and metamorphosed and eventually turned into “Helping Children Succeed.” I guess that’s when I knew it was over: when it took shape, much to my surprise, as a fully formed book.

Left: “He explained that people, for the most part, wanted to tell their stories, and that the most respectful thing you could do as a reporter was to ask them the questions about their life that you genuinely found most interesting,” reporter Paul Tough said of his friend Ira Glass, who offered him interviewing advice early on in his career.

Author Steven Greenhouse answers your questions about ‘Beaten Down, Worked Up’