How to make holiday eggnog that will last all year

In 2006, as he prepared to work his first Christmas at Sun Liquor Lounge, the cocktail bar he’d just helped launch in Seattle, Erik Chapman wanted to make something traditional.

The most traditional holiday drink on this side of the Western Hemisphere, of course, is eggnog.

That Thanksgiving, he pulled out 20-quart mixers and made egg yolks into perfect meringue ribbons, beat egg whites until they rose into stiff peaks. And then, he waited.

A month later, he served up a few dozen cups to customers celebrating Christmas Eve and Christmas Day. Eleven years later, Chapman’s quest to replicate the traditional cocktail has inspired its own tradition at Sun Liquor Lounge and its offshoot distillery, outside which thousands of people line up to buy his eggnog by the glass or by the bottle.

Here’s the thing about eggnog: Unlike the milky, sugary stuff you buy at the grocery store, traditional eggnog is rich and dense. Many people have never had eggnog as it was originally intended, Chapman says. Before coming to America, our founding fathers made the beverage as a way of preserving ingredients that would go bad. That means it needs all of the good stuff — no skimping on the liquor or the sugar or the cream. It also, thankfully, means it essentially lasts forever. One journalist who made the drink with Chapman returned months after his story ran, mason jar in hand. They drank the eggnog they’d made together, more than a year later.

The real secret to a great traditional eggnog is less about your recipe, says Chapman, who has made his batches with everything from tequila to scotch to brandy. It’s more about the aging process. Today, at Sun Liquor Distillery, they dedicate three months of the year to making eggnog, still in those 20-quart containers. This year, they sourced 55,000 eggs to produce 21,000 bottles of eggnog (and even more by the glass). They also distilled their own pear and apple brandy from a local cidery.

But you can still get a good product if you’re preparing now for an end-of-the-year soiree. As for what liquor to add: Chapman’s most traditional recipe is based on a trio of bourbon, brandy and rum, but “whatever you like is always the best choice.” If you do it right, you’ll have leftover holiday cheer for months (or years) to come. 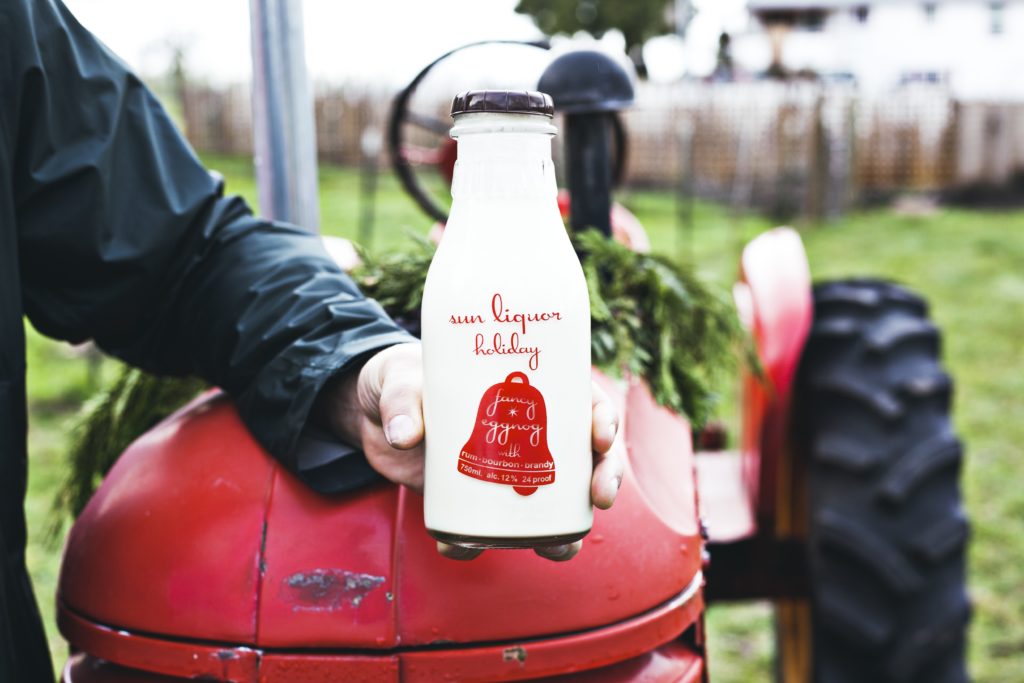 1. Separate egg whites from yolks and place them in separate bowls. Beat the yolks with an electric mixer until pale yellow.
2. Slowly add the 1 cup sugar. Mix for 30 seconds, then slowly add brandy, bourbon, rum and half and half.
3. In a separate bowl, beat the egg whites until soft peaks form.
4. Add the egg white mixture to the yolk mixture.
5. In separate bowl, whip the heavy cream until soft peaks form and add it to the egg mixture.
6. Spoon contents together loosely and store in glass container in the back of the refrigerator, making sure it’s 40 degrees or colder.
7. Don’t open or mix the jar. Let it sit for at least a week.
8. When ready to serve, mix the eggnog with hand mixer and serve in chilled coupe. Top with a pinch of fresh ground nutmeg.