Too many people think only of “beads and feathers” when they hear the term Native American art, says Merritt Johnson, a multi-disciplinary artist of Mohawk and Blackfoot descent. But her sculptures, paintings and performance art go well beyond that. Johnson was one of nine Native American artists featured in an exhibition called “Cross Currents,” which debuted this spring at Metropolitan State University of Denver and will soon travel to Durango, Colorado.

Cecily Cullen is the show’s curator. She said she chose the artists because each of them drew from their indigenous past and also used contemporary practices to frame a modern reality. “Each of these artists are masters of poetic expression, visual metaphor, wit and mystery. And they use those skills to pull you in, to investigate a deeper meaning of what it means to be indigenous.” 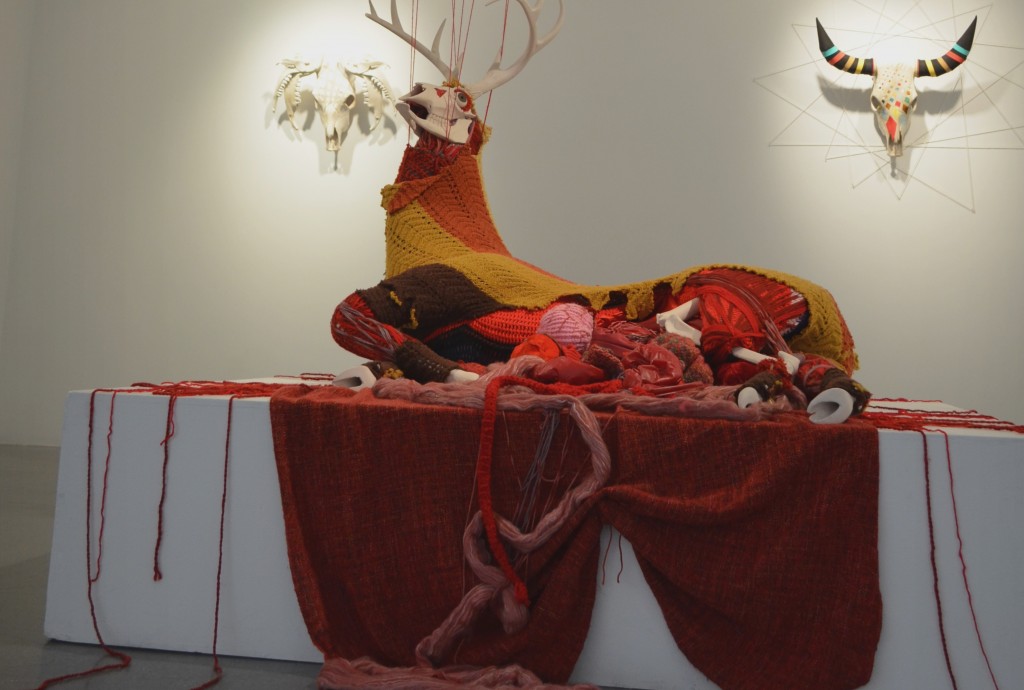 Cannupahanska Luger grew up on a reservation in North Dakota. Primarily a ceramic artist, he calls his sculpture of a wounded elk with fabric entrails spilling out a commentary on nostalgia and the romanticizing of native cultures.

Painter Frank Buffalo Hyde uses his work to respond to the current trend in mass media of misappropriating sacred objects from Native American culture. One of his paintings is a direct response to a photo of actress Drew Barrymore wearing a war bonnet with a Budweiser apron.

Sara Sense is a mixed media artist of Chitimacha and Choctaw descent. She weaves together photographs using traditional Chitimacha basketry techniques, something she sought permission for from tribal elders. She feels it’s very important to be respectful of the ancient craft. But she wants to use it to illustrate the practice of colonialism and the Native American slave trade that took place in New Orleans.