The very public fight to stop a pipeline ​company from crossing sacred land and water may be helping open doors for a surge of content from Native filmmakers telling their own stories. Their films — ranging from documentaries to virtual reality projects to narrative features — are increasingly popping up at major film festivals and video streaming platforms.

At the Athena Film Festival in New York City in March, producer Gale Anne Hurd ​introduced her new film, “Mankiller,” which tells the story of a Native woman she was sure most audience members had never heard of. 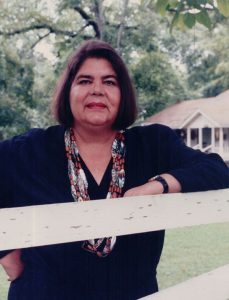 “It’s not that we’re uninterested” in these kinds of stories, Hurd said in an interview with NewsHour before introducing the documentary film. “We don’t know about her to even ask…I had never heard of Wilma!” Instead, she said, most people only knew about Native women who had been helpful to colonists, such as Sacagawea and Pocahontas, but little else.

Wilma Mankiller, the first female chief of the Cherokee Nation, was first an activist on the front lines of the California Bay Area who participated in the takeover of Alcatraz Island between 1969 and 1971 in a bid to reclaim the land for all American Indians. She had come to California after being forced into a Bureau of Indian Affairs Relocation Program, taken from her Cherokee home in Oklahoma to housing projects in San Francisco.

She was elected as deputy chief in 1983, and after rising to chief two years later, she was twice re-elected as the Cherokees’ leader, and worked to revolutionize Indian-run health care.

“Mankiller” is the latest in a series of films garnering mainstream attention in the aftermath of the fight at Standing Rock over the Dakota Access Pipeline, which was revived by President Trump just four days into his presidency after former President Obama had halted construction.

It’s not that the Native American fight to protect sacred lands was new, but the images coming out of Standing Rock turned powerful people into allies and helped persuade the Obama White House to intervene. (Similarly, Mankiller was able to make an impact on a national level; former President Bill Clinton awarded her the Presidential Medal of Freedom in 1998.)

With the NODAPL movement, every major news network covered developments in almost real time, broadcasting live feeds that opened the eyes of non-Natives to what it means to be Native in America. This was possible, in large part, because of social media campaigns that brought the struggle straight to the small screen. Hollywood stars including Leonardo DiCaprio, Shailene Woodley and Mark Ruffalo, among others, took notice.

Romana Emerson, a Diné, filmmaker and Sundance Native Filmmaker Lab Fellow, believes it’s not just about the pipeline fight but also other changes. “Accessibility and quality of the technology make it easier for Native filmmakers to tell stories about the places we live and the issues that are affecting our communities,” she said. And that makes it easier for those stories to get out there.

After six years in the making, “Mankiller” went on to premiere as an official selection in the U.S. Documentary category at the 2017 Los Angeles Film Festival. It also played to packed theaters in Florida, New York City and California this past August, and opened the Native Cinema Showcase at the New Mexico History Museum. The film uses both archival testimony from Mankiller’s career as an activist and interviews with those closest to her.

Director Valerie Red-Horse shares a personal connection to Mankiller’s life story, and said the extensive research allowed her to rediscover her own Cherokee roots. Red-Horse’s father was forced to relocate from his land as a result of what the film calls “ill-advised government policy.” Red-Horse has also worked in economic development advising Cherokee tribes on infrastructure.

Viceland’s “Rise,” another film to premiere at Sundance in 2017, is a documentary style-series that travels to indigenous communities across the country to visit the front lines of the Native resistance and the people protecting their homelands. “Akicita: The Battle of Standing Rock,” directed by filmmaker Cody Lucich of the Estom Yumeka Maidu Tribe of Enterprise Ranchera, captures the havoc that self-dubbed water protectors faced in North Dakota. 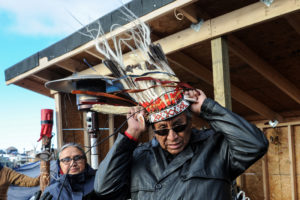 Jade Begay, who was ran communications for Indigenous Environmental and Honor the Earth in Standing Rock during the pipeline fight, said she grew up without seeing Native people in Hollywood and mainstream media.

It’s part of the reason she made a new virtual reality film, “Blood Memory,” an immersive experience that highlights the interdependence between indigenous identity and land, unveiled at SXSW this month.

“It’s about spirituality, wisdom, and knowledge we’re trying to maintain, carried on through our cultures,” Begay said “We want to shift the narrative.”

Last year, at SXSW, Begay led a discussion of voices from the no-Dakota Access Pipeline movement, including many non-Native journalists covering the largest Native American occupation since Wounded Knee. The national visibility of the Standing Rock movement demonstrated the importance of Native people controlling the narrative and telling their own stories.

Ernest Whiteman III, who is Northern Arapaho, directs the First Nations Film and Video Festival, a grassroots film festival dedicated to showcasing films by Native American directors. “Representation behind the camera means we are owning our own authority over our culture and voice and not just slapping new stereotypes on the screen again,” Whiteman said. “There is still much more to do until we get on the playing field that is supposed to be even.”

Written and directed by Taylor Sheridan, who is non-Native, the feature film captures the U.S. government’s failure to accurately track missing and murdered Indigenous women. “Wind River” has a 90 percent audience approval rating on Rotten Tomatoes, and took $33,782,714 at the box office in 2017. Sheridan’s script was brought to the attention of the leadership of ​the Tunica-Buloxi tribe, a majority partner in Acacia Filmed Entertainment, which decided to finance “Wind River.”

Brenda Litinger, a Tunica-Buloxi Tribal Council member, noted that “everyone favored moving forward with this project, especially given the subject matter. Lessons from the past are just as applicable today for all Native communities, and for non-Native communities.”

For decades, there has been little Native American storytelling on-screen — and also little representation. But that may be beginning to change, with greater attention paid to the casting of Native American roles. The part of the grieving father in “Wind River” is played by Gil Birmingham, who is Comanche, and casting directors were instructed to vet auditioning actors for their ancestry, according to the New York Times.

The $39 million movie “Hostiles,” which came out last year and is set in the late 1800s, won praise from film critics, including Vincent Schilling, a correspondent with Indian Country Today who is Akwesasne Mohawk. A departure from most westerns, the film tells the story of an Army captain tasked with escorting a Cheyenne chief and his family through dangerous territory.
“I went into [this movie] waiting for the same stale stereotypes often portrayed in westerns or civil war films,” Schilling wrote, but said he found something different. “I felt outrage at the reality, laughed at the humanity and grieved for the brutal truth that existed in the world of 1892.”

Actor Wes Studi, who starred as Chief Yellowhawk in “Hostiles,” made history earlier this month​ by becoming the first Native American to ever present at the Academy Awards, speaking in Cherokee as he paid tribute to fellow Native military veterans. Studi was also an activist in the ‘60s and ‘70s, appearing on television news channels across the country during the occupation of Wounded Knee.

So #WhatDidWesSay on the #Oscars last night? As Vietnam Vet @WesleyStudi introduced a montage of military movies, he said in our Cherokee language
“Hello. Appreciation to all veterans & Cherokees who’ve served. Thank you!” Learn more Cherokee here! Wado! https://t.co/qc9yAx5ThP pic.twitter.com/aVAs94VRUo

More than four decades ago at the 45th Academy Awards ceremony, Apache actress Sacheen Littlefeather famously took the stage on behalf of Marlon Brando to refuse the Best Actor award for his role in “The Godfather.” ​Littlefeather, who ​has served as president of the National Native American Affirmative Image Committee, declined to even hold Brando’s award in protest of the treatment Native Americans had received​ ​in movies.

“In the future, our hearts and understanding will meet with love and generosity,” Littlefeather concluded, before walking offstage to a room half-booing.
​​
Some earlier films have received praise for moving Hollywood past traumatizing stereotypes of Native Americans, like “Little Big Man” (1970), “Windwalker” (1980) and “Geronimo: An American Legend” (1993).

Fast forward to 2018, and ​the current ​Sundance lineup includes eight indigenous-made films​, as well as a screening of Chris Eyre’s 1998 film “Smoke Signals,” the first commercially distributed film written, co-produced and directed by a Native American. Eyre is Cheyenne and Arapaho, and the film tells the story of two young men, Victor and Thomas, who live on an Indian reservation in Idaho.

In Montana, the Big Sky Documentary Film Festival, which showcases more than 100 documentaries and serves as a qualifying event for the Oscars, announced waived entry fees for Native filmmakers. For 2018, the festival decided to expand the film categories to include a slot specifically for Native American films directed by Native people.
​
Rachel Gregg, the executive director of the festival, said that,​ “What we need now is for that ​[Native American] content to find its way out of the echo-chamber, which will require recognition from larger players in the industry.” Like other grassroots efforts, Gregg said, “the indie scene is getting it, the larger studios are not.”

Whether studios are getting on board or not, there are signs that audiences want them to. A University of California Los Angeles (UCLA) analysis of 174 theatrical films released in 2016 suggested that films and movies are becoming more diverse. “The industry appears to have finally embraced the idea that America’s increasingly diverse audiences demand film and television content populated with characters whose experiences resonate with their own, who look like them, and with whom they can relate,” the report said.

At the Women’s March on Washington, Wilma Mankiller was cited by organizers as a true revolutionary for women’s rights in America. As the #MeToo and #TimesUp movements take Hollywood by storm, Red-Horse said she knew the time was ripe to tell Mankiller’s life story, a heroine who once said she wanted to be remembered as “the person who helped us restore faith in ourselves.”

Editor’s note: This story misidentified the film festival at which “Mankiller premiered.” It premiered at the 2017 Los Angeles Film Festival. We regret the error.