Is culture at risk in Myanmar?

Chief arts correspondent Jeffrey Brown is writing from Yangon, the largest city in Myanmar (formerly Burma) as part of a new series “Culture at Risk.”

In the immigration line at Yangon airport as I waited to present my passport the radio played — can it be? — “Red River Valley,” sung by a woman in Burmese. On the way into the city I see the driver take his seat on the right hand side — British style — as I’d expected. But then I realize we are driving on the right hand side–American style. Huh? Apparently, a ruling general once visited the U.S. and thereafter decreed that the Myanmar’s people should drive on the right hand side as well. But steering wheels stayed as they were. I am not looking forward to being in a hurry and watching — or perhaps closing my eyes — as a driver attempts to pass on the left, without being able to see until it’s rather (too?) late.

We are here to report on a country opening up to the world, politically, economically and culturally. A ruthless military dictatorship clamped down on all opposition, prohibited free expression and kept the country closed off and shrouded in a North Korean-like secrecy for more than five decades. That has begun to change in the last five years or so, dramatically in the last two. It’s tentative, uncertain — and some people we talk with are quick to doubt how far it will go — but it can be seen even in little ways and even in the first days here: The magazine in my hotel room features an article by the editor on how the ‘country is living a lie’ believing that real political reform will come from the ruling military. Just a few years ago that could not have been published. In a small shop I see figurines of Aung San Suu Kyi, the Nobel Peace Prize winner long held under house arrest. On the streets there’s a great deal of construction. Not the ‘crane on every corner’ I saw years ago in Shanghai as it began its incredible transformation. But a beginning — money clearly flowing in, new office buildings (and soaring rents), some ‘hip’ hotels and restaurants, a city being reshaped. Modern buildings sitting next to grand but dilapidated older ones. 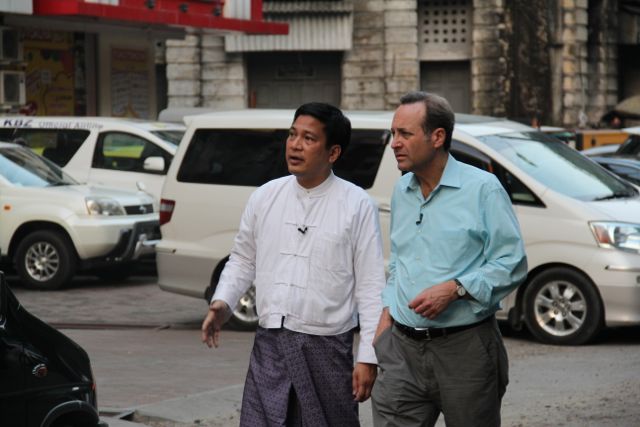 That’s a big reason we’re here, for the first in a new series titled, “Culture at Risk.” The idea is to look at artifacts, artworks, buildings, whole communities at risk from war, environmental damage, neglect and other problems including, as here, development. As we walked along a street of once magnificent old colonial-era buildings, for example, Thant Myint U, head of the Yangon Heritage Trust, told me there is ‘nothing like this in all of Asia, perhaps in the world’: a largely preserved, once-cosmopolitan, early 20th century city.

In a short walk of a few blocks we see a new upscale restaurant about to open, rentals and office space that approach or surpass Manhattan rates, and a dystopian scene in a once grand building — the “Balthazar” — of rats scurrying through garbage, waste water streaming down from above, mold everywhere and families living amid it all. What will happen to them, to those buildings, to this city? And what will happen, politically, to this country?