James Caan, Oscar nominated actor for ‘The Godfather,’ dies at 82

James Caan, the curly-haired tough guy known to movie fans as the hotheaded Sonny Corleone of “The Godfather” and to television audiences as both the dying football player in the classic weeper “Brian’s Song” and the casino boss in “Las Vegas,” has died. He was 82.

His manager Matt DelPiano said he died Wednesday. No cause was given and Caan’s family, who requests privacy, said that no further details would be released at this time.

Al Pacino wrote in an emailed statement that, “Jimmy was my fictional brother and my lifelong friend. It’s hard to believe that he won’t be in the world anymore because he was so alive and daring. A great actor, a brilliant director and my dear friend. I’m gonna miss him.”

Robert De Niro also wrote that he was, “very very sad to hear about Jimmy’s passing.”

Many of his collaborators also wrote condolences on Twitter on Thursday.

Adam Sandler, who acted with him in “Bulletproof” and “That’s My Boy” tweeted that he, “Loved him very much. Always wanted to be like him. So happy I got to know him. Never ever stopped laughing when I was around that man. His movies were best of the best.”

A football player at Michigan State University and a practical joker on production sets, Caan was a grinning, handsome performer with an athlete’s swagger and muscular build. He managed a long career despite drug problems, outbursts of temper and minor brushes with the law.

Caan had been a favorite of Francis Ford Coppola since the 1960s, when Coppola cast him for the lead in “Rain People.” He was primed for a featured role in “The Godfather” as Sonny, the No. 1 enforcer and eldest son of Mafia boss Vito Corleone.

Sonny Corleone, a violent and reckless man who conducted many killings, met his own end in one of the most jarring movie scenes in history. Racing to find his sister’s husband, Corleone stops at a toll booth that he discovers is unnervingly empty of customers. Before he can escape he is cut down by a seemingly endless fusillade of machine-gun fire. For decades after, he once said, strangers would approach him on the street and jokingly warn him to stay clear of toll roads.

Caan bonded with Brando, Robert Duvall and other cast members and made it a point to get everyone laughing during an otherwise tense production, sometimes dropping his pants and “mooning” a fellow actor or crew member. Despite Coppola’s fears he had made a flop, the 1972 release was an enormous critical and commercial success and brought supporting actor Oscar nominations for Caan, Duvall and Al Pacino.

Caan was already a star on television, breaking through in the 1971 TV movie “Brian’s Song,” an emotional drama about Chicago Bears running back Brian Piccolo, who had died of cancer the year before at age 26. It was among the most popular and wrenching TV movies in history and Caan and co-star Billy Dee Williams, who played Piccolo’s teammate and best friend Gale Sayers, were nominated for best actor Emmys.

After “Brian’s Song” and “The Godfather,” he was one of Hollywood’s busiest actors, appearing in “Hide in Plain Sight” (which he also directed), “Funny Lady” (opposite Barbra Streisand), “The Killer Elite” and Neil Simon’s “Chapter Two,” among others. He also made a brief appearance in a flashback sequence in “The Godfather, Part II.” 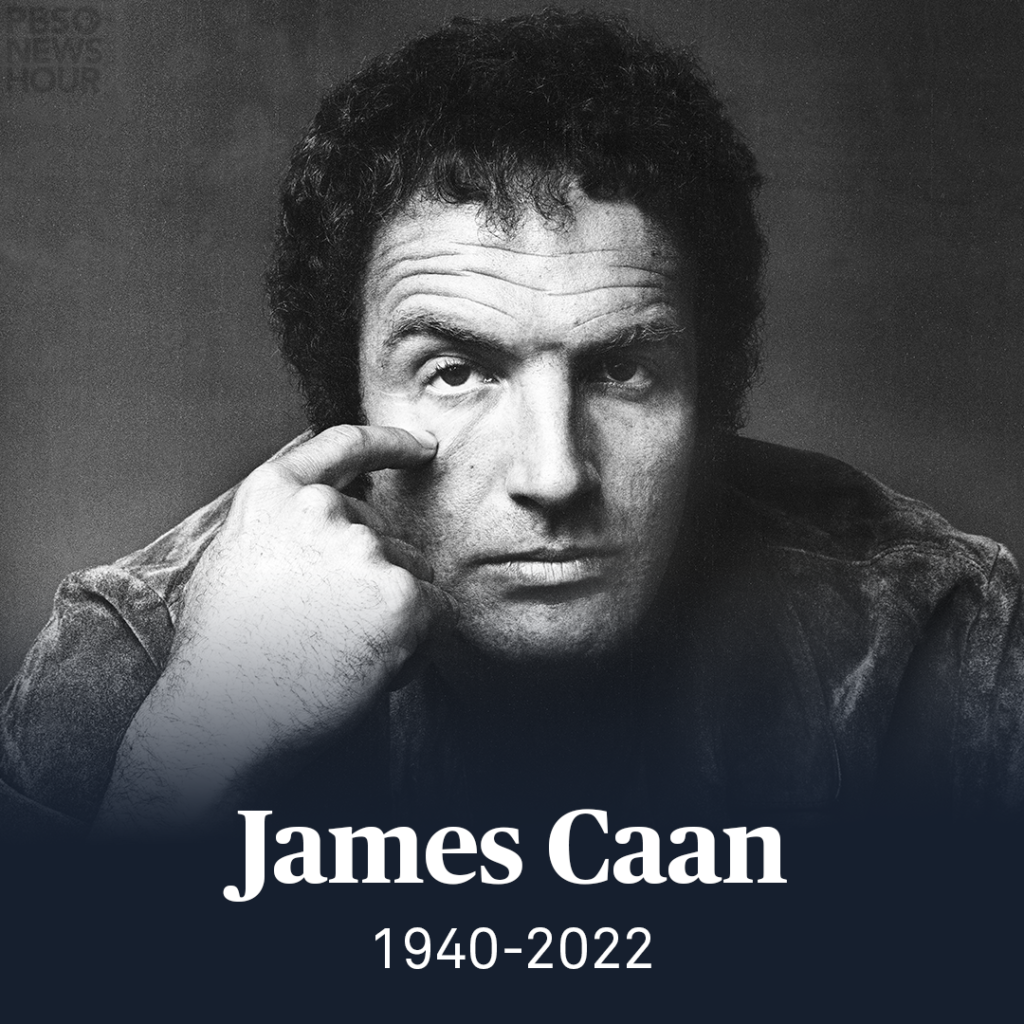 But by the early 1980s he began to sour on films, though Michael Mann’s 1981 neo-noir heist film “Thief,” in which he played a professional safecracker looking for a way out, is among his most admired films.

“The fun of it was taken away,” he told an interviewer in 1981. “I’ve done pictures where I’d rather do time. I just walked out of a picture at Paramount. I said you haven’t got enough money to make me go to work every day with a director I don’t like.”

He had begun to struggle with drug use and was devastated by the 1981 leukemia death of his sister, Barbara, who until then had been a guiding force in his career. For much of the 1980s he made no films, telling people he preferred to coach his son Scott’s Little League games. Scott Caan also grew up to be an actor.

Short on cash, Caan was hired by Coppola for the leading role in the 1987 film “Gardens of Stone.” The movie, about life at Arlington National Cemetery, proved too grim for most audiences, but it renewed Caan’s acting career.

He returned to full-fledged stardom opposite Kathy Bates in “Misery” in 1990. In the film, based on Stephen King’s novel, Caan is an author taken captive by an obsessed fan who breaks his ankles to keep him from leaving. Bates won an Oscar for the role.

Once again in demand, Caan starred in “For the Boys” with Bette Midler in 1991 as part of a song-and-dance team entertaining U.S. soldiers during World War II and the Korean and Vietnam wars. The following year he played a tongue-in-cheek version of Sonny Corleone in the comedy “Honeymoon in Vegas,” tricking Nicolas Cage into betting his girlfriend, Sarah Jessica Parker, in a high-stakes poker game so he can spirit her away and try to persuade her to marry him.

Other later films included “Flesh and Bone,” “Bottle Rocket” and “Mickey Blue Eyes.” He introduced himself to a new generation playing Walter, the workaholic, stone-faced father of Buddy’s Will Ferrell in “Elf.”

Caan didn’t take a starring role in a TV series until 2003 but his first effort, “Las Vegas,” was an immediate hit. When the series debuted, he was a casino surveillance chief dealing with cheaters and competitors of the fictional Montecito Resort and Casino.

His character rose to become boss of the Montecito but remained the tough guy who had learned judo in an undercover division of the U.S. government. Caan left the show during the fourth season and it was later canceled.

Born March 26, 1940, in New York City, Caan was the son of a kosher meat wholesaler. He was a star athlete and class president at Rhodes High School and, after attending Michigan State and Hofstra University, he studied at the Neighborhood Playhouse School of the Theater under Sanford Meisner.

Following a brief stage career, he moved to Hollywood. He made his movie debut in a brief uncredited role in 1963 in Billy Wilder’s “Irma La Douce,” then landed a role as young thug who terrorizes Olivia de Havilland in “Lady in a Cage.” He also appeared opposite John Wayne and Robert Mitchum in the 1966 Western “El Dorado” and Harrison Ford in the 1968 Western “Journey to Shiloh.”

Editor’s note: This story has been corrected to reflect Caan’s birth year was 1940