Paula Fox, prize-winning adult and children’s author, chronicler of abandonment, loss and desperation — of what happens when things break down — died last week at 93. She won the Newbery Medal and National Book Award for her children’s books; her own childhood was characterized by neglect. She also wrote memoirs and adult fiction, but for years these were out of print. Fox’s work experienced a resurgence due in part to the admiration of other novelists, including Jonathan Franzen, who fell in love with her 1970 novel “Desperate Characters.” The novel, about a New York couple and the domestic anomie of the 1960s, was reissued with a new introduction by Franzen in 1999, and again in 2015. After her passing, Franzen shared an appreciation of Fox in a series of emails with correspondent Jeffrey Brown. You can read that conversation below.

JEFFREY BROWN: You were one of the people who helped bring more attention to Paula Fox. But when did you first ‘discover’ her — if that’s the right word? And what did you see in her writing?

JONATHAN FRANZEN: Paula’s work was never really lost– she was always well known to lovers of children’s novels, and even during her decade of relative eclipse, in the eighties and early nineties, her adult novels had a small but passionate following. And so it was by word of mouth, not by chance, that I “discovered” her book “Desperate Characters.” I was at an artists colony in 1991 and one of the other writers there, Sigrid Nunez, insisted that I read it immediately. But my experience of reading it really did feel like a discovery– or, maybe better, a revelation. It seemed that this writer I’d never heard of, Paula Fox, had sat down in the late sixties and written a novel specifically for me at that moment in my life. I couldn’t believe it. She got the whole picture, both the stuff closest to the center of my private experience and the big picture of a rabid American culture. Later, rereading the book more objectively, I realized that “Desperate Characters” is simply one of the greatest novels ever written by an American. 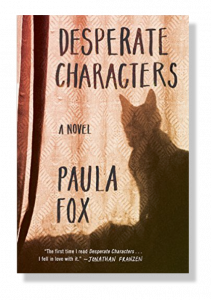 JEFFREY BROWN: Your 1999 essay, “No End to It: Rereading Desperate Characters” tells how after that initial “discovery” you read and reread the novel over the years. (The essay serves as the introduction to the copy I bought after you turned me on to the book.) It seems clear that part of that rereading was aimed at unlocking something in the writing that grabbed but perplexed you – you as both a reader and writer. Not just what she’s writing about but how she did it. True? What was that something?

JONATHAN FRANZEN: That particular novel– she has a couple of others that are in the same league– makes a bold, deft connection between desperation in a marriage and desperation in American society at large. So the first times I reread it, I was looking for answers, for help in understanding my own (failing) marriage and my own distress about the country. It took me a while to realize that the novel was, at a deeper level, about meaning; about whether meaning is even possible. This put me in the strange position, in later re-readings, of searching for the meaning of a book about the search for meaning. It’s a short book, but its depths are really dizzying. Eventually I was lucky enough to become friends with Paula, and I remember what she said after she read my introduction: “I was unaware of doing any of the things you found in the book.” This was partly modesty, partly a joke, but also partly a truth about writers who work by instinct: if you pay careful enough attention to the small things, you may end up creating a whole that’s much larger than the parts you consciously control.

JEFFREY BROWN: I’m not sure I fully understand what you mean by ‘writing by instinct’. Do you see yourself as a writer who works by instinct?

JONATHAN FRANZEN: I absolutely work by instinct. You can– and I do– put a lot of analytical thought into working out a story, but the most amazing plan doesn’t mean anything if it doesn’t work on the page. The page is, literally, where the writing happens. You have to follow the sentences and the dialogue where they take you. You navigate by what feels interesting, what feels true, what feels hot. In “Desperate Characters” you can feel Paula working out, one page at a time, what happens when a liberal woman with a conservative husband is bitten by a possibly rabid cat that she persists in being kind to.

JEFFREY BROWN: What can you tell me about Paula Fox the person?

JONATHAN FRANZEN: She loved animals, she loved children– and she respected them. She was tall and beautiful and grand. A harsh judge of foolish and cruel people, a champion of the weak or troubled or disenfranchised. She quoted passages of Yeats, from memory, like a person whose life had been saved by literature, but she could also be completely silly. She liked a martini and a cigarette.

JEFFREY BROWN: Finally: You call Desperate Characters a novel “soaring above every other work of American realist fiction since the Second World War” and write “it seemed to be obviously superior to any novel by Fox’s contemporaries John Updike, Philip Roth, and Saul Bellow.” That’s an all-star crew. I dislike the tendency to turn culture (and everything else) into a list and don’t mean to provoke a food fight. But as a reader myself and someone watching the culture and meeting many writers and artists I am interested in who gets read, who doesn’t, why I suddenly learn about a writer – even great writers – I’d never previously heard of and, of course, who else am I missing? Do you think about this? Why is Paula Fox not as well-known and read as you clearly think she deserves to be?

JONATHAN FRANZEN: She may be more of a writer’s writer, at least in her adult novels. After getting a late start– after an utterly chaotic childhood, two early marriages, and child-rearing– she was very prolific, but much of her output was YA literature (a term she disliked, preferring “books for children”). And for most of the time she was writing, she lived in a male-dominated literary world. Contrast all this with Updike, who came out of Harvard, burst on the scene in his twenties, wrote about the melancholies and sex lives of affluent American suburbanites, and fit the pattern of a male writer having a full and long career. I don’t care for lists myself, so I won’t make a long one here, but I think in general great writing by women is more often overlooked than its male counterparts. I wonder if you’ve read Jessica Anderson’s “Tirra Lirra by the River,” or Christina Stead’s “The Man Who Loved Children,” or the stories and novels and essays of Joy Williams. If you haven’t, you should!

JEFFREY BROWN: I will. Thanks for the recommendations and for this remembrance of Paula Fox and her work.

Left: American author Paula Fox poses for a portrait at her home Jan. 13, 2007 in the Brooklyn borough of New York City. (Photo by Ulf Andersen/Getty Images)