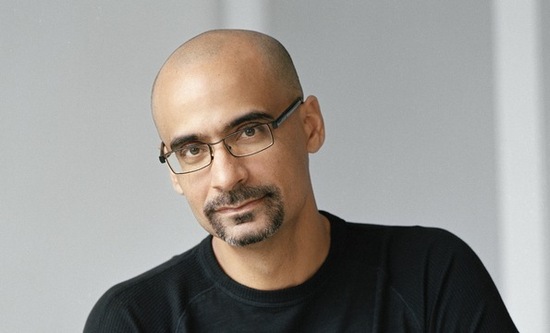 The writer Junot Diaz is back with a new collection of stories titled “This Is How You Lose Her.” They feature several characters from his first novel, “The Brief Wondrous Life of Oscar Wao,” which won the Pulitzer Prize for fiction in 2008. The stories look at themes of family, love and infidelity, and are all told through Yunior, Diaz’s dazzling character and narrator from “The Brief Wondrous Life of Oscar Wao.”

I first spoke to Diaz back in April 2008, but I caught up with him last week while he is in the midst of a book tour:

A transcript is after the jump.

JEFFREY BROWN: Welcome again to Art Beat. I’m Jeffrey Brown. The writer Junot Diaz is back with a new collection of stories titled “This Is How You Lose Her,” and they feature several characters from his last book, his first novel, “The Brief Wondrous Life of Oscar Wao,” which won the Pulitzer Prize for fiction in 2007. Junot Diaz joins us from the midst of a book tour. Welcome to you. Nice to talk to you again.

JUNOT DIAZ: Yes, so great for you to have me again.

JEFFREY BROWN: We last talked about Oscar Wao and we spent a day, a very pleasant day, in Manhattan that I remember, but I gather some of these stories were in your head or in the planning before that, is that what I read?

JEFFREY BROWN: This character Yunior that you referred to is one thread that holds these stories together. I was thinking about the title, “This Is How You Lose Her,” almost like taking stock, this is how you blow it over and over again.

JEFFREY BROWN: Infidelity over and over again, dumbass behavior as you say, what’s with you I guess I should ask?

JUNOT DIAZ: Well, you know, when you think about it, actually there is, for example, I think it’s kind of too broad to say infidelity. For one of the stories — I mean, there are nine stories — one of the stories is about Yunior’s childhood, where we see his father’s infidelity and it’s got nothing to do with him. And another story we see Yunior having a completely improper, illegal relationship as a teenager with a woman almost three times his age. In another story, it’s about a girl who falls in love with this terrible brother and what it’s like longing and loving some girl, who, you know, they’re not seeing you they are just seeing this kind of abusive lunatic. They’d prefer that. Infidelity certainly is a thread in it, but it’s also just a lot about the kind of ways we fall into strange relationships and how some relationships just really haunt us a long time.

JEFFREY BROWN: Well, relationships and also, and this as I recall I was talking about for your novel, masculinity — just the complex nature of that.

JUNOT DIAZ: No question. I mean, look, I don’t know, I can’t speak for anyone else but I spent so much time trying not to think about it because of its complexity and because of its weight. So as an artist, for me to turn to it, you know, for me — I will say it was a bit of a challenge.

JEFFREY BROWN: Once you have this story and these variations we’re talking about, about relationships, you have to put it across with language, with voice, and these stories seem to me so much about voice, the one that’s telling the story, whether it’s Yunior or the young woman you were talking about. Is that a fair way to characterize them? Was that in fact a starting point in some cases, the voice?

JUNOT DIAZ: What happened for me is that I’m — again, this is kind one of the hidden things — I’m a bit of a short story structure wonk, if you will.

JEFFREY BROWN: What does that mean?

JUNOT DIAZ: I’m a person who’s really obsessed with the way structure works in short stories. I drive my people who study with me the short story, I drive them crazy by my ability to chart like the basic six or seven patterns of a traditional short story, like how they’re actually structured. You know, one will alternative been past and present, one will start in the present and go all the way through the past and then end back in the present, and there are these kind of structures. Often for me stories begin with ideas that I want to pursue, a structure. And then the last thing I apply is the voice that hides both the ideas and the structure so that the reader just thinks that they are encountering some vernacular, some casual guy talking and are not always aware of the kind of hard mechanisms at work behind the story to make it successful.

JEFFREY BROWN: But you, of course, you see the structure, so it’s harder than it looks, I guess, or make it look like it’s not so hard?

JUNOT DIAZ: Well, yeah, every artist notices that. Look, if you’ve ever seen a musician perform, you are kind like man that’s kind wild, that’s cool. You barely ever see the effort behind it. But the first time you pick up a guitar and try to put fingers to the strings, you suddenly realize, holy cow, that thing that seems so effortless is really just a tremendous amount of dedication.

JEFFREY BROWN: As a student of this short story, what are your models? Who do you read, who do you look to, to think about structure?

JUNOT DIAZ: It’s funny. I read endlessly, and there are so many people that are so good. But today I was just sitting across from some dude at a bar today, like just a couple of hours ago, and we were talking on Ron Hansen’s seminal classic short story collection “Nebraska.” And again, it’s like, one reaches far and wide when one wants to learn this form, because this is such a tricky form and it bears fruit for you to know as many practitioners as possible. So certainly Ron Hansen is somebody that I kind of obsess over. I really think about the memoir stories of Maxine Hong Kingston as a great model. You cannot escape the legacy of Denis Johnson’s “Jesus’ Son,” just a tremendously important book.

JEFFREY BROWN: I wanted to ask you about one particular story in this collection, because it was a little different tone, I think, maybe the only one in the voice of a woman “Otravida, Otravez.” A quieter tale and voice in a way. Tell me a little bit about that one.

JUNOT DIAZ: It’s weird. I’m very guilty of, like I said earlier, of being kind of a story wonk, of kind of being a story super nerd, and this book of course, the stories all work together to this larger effect. And in this case I could have made it more obvious, but you know, I kind of like the idea that people have to work hard to sort of make some connections. I don’t know what’s wrong with me. But in this case, this is part of the game with the book, where you finish the book and you suddenly realize at the end of the book that Yunior reveals that he has written the book that you just read. You know, it’s like the last part. You’re like, this is not Junot Diaz’s book, this is Yunior’s book supposedly. So one of the things you discover if you look at the story close enough, if you are bored enough to have like time to reread it six or seven times, you discover that the man in the story “Otravida, Otravez” is actually Yunior’s father. It’s Ramon, which is Yunior’s father’s name. And the mother in the Dominican Republic is Yunior’s mother. And earlier in another book of mine, again this lid of what I saying, this kind of grad school nerd stuff — in “Drown” Yunior reveals that his mother had a family before him and his brother was born and that these children died. And so what ends up happening is this story is actually Yunior the writer, he reveals in the book that he’s a writer, imaging the other woman’s life who almost tore his family apart, and for a character like Yunior who spends his entire time wrestling with his ability to fully imagine women, this story even though it kind of seems to be disconnected, it’s actually this great test and very connected to Yunior’s struggle. Here is Yunior trying to imagine the woman that he would least be sympathetic to, that he would least want to humanize, and yet he’s trying to do it in a human way, and depending on the reader, whether you think he’s successful or not feeds into our idea of whether this character is in any way grown by the end of the book.

JEFFREY BROWN: Well, it’s interesting because we talk about so much about linked story collections, and that’s a link I confess I didn’t see it yet, but as you unfold, as you spool it out there, it’s fascinating. And going back to the first book as well.

JUNOT DIAZ: Yeah, it’s kind of nerdy. I think that’s my problem. I’m always sort of, I’m making each of these books fit, connect, click with each other so that all the books that I write about Yunior are chapters in a larger novel.

JEFFREY BROWN: So, what is next then? Because the novel came after the first collection?

JUNOT DIAZ: Yes, sir. You know what’s next is I’m taking a break. I spent so many years with Yunior, really so many years, so I’m taking a break and trying to strike off in a new direction. I want to try to write a kind of apocalyptic monster book set in the Dominican Republic, in Haiti, and just see if I can make anything of it.

JEFFREY BROWN: All right, we’ll wait for that one. In the meantime, the new collection is “This Is How You Lose Her.” Junot Diaz, it’s nice to talk to you again. Thanks so much.

JUNOT DIAZ: Yeah, brother, thank you so much.

JEFFREY BROWN: And thank you for joining us on Art Beat. I’m Jeffrey Brown.

Correction: Junot Diaz won the Pulitzer Prize for fiction in 2008, not in 2007 as Jeffrey Brown says in his interview with Diaz.