While lauded for his extraordinary conducting skills, Abbado was noted for his humility. “The term ‘great conductor’ has no meaning for me. It is the composer who is great,” Abbado said. 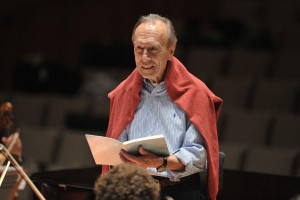 Abbado was born in Milan in 1933. His father, Michelangelo Abbado, was a violinist and teacher and gave him his first music lessons when he was a child.

After studying piano at the Milan Conservatory and conducting at the Vienna Academy of Music, Abbado became the resident director of the famous La Scala opera house in Milan in 1968, a position he held for almost two decades. He also served as music director of the London Symphony Orchestra from 1979 to 1988.

In 1989, members of the Berlin Philharmonic elected him successor to music director Herbert von Karajan. He led the Berlin orchestra until 2002 when he was diagnosed with stomach cancer.

Though cancer, even in remission, had severe effects on his health, Abbado said music remained his primary motivation and source of energy.

“The secret of life, I think, (is) to find always something better, to find new inspirations, new enthusiasms,” Abbado told The Guardian in 2009. “Nothing is ever perfect, and there is always something new to discover.”