As “Wonder Woman” hits theaters June 2, there’s a lot for the comic book superheroine to celebrate. The film marks the first time Wonder Woman will be the headliner of a major motion picture. It also comes a few months after the character, created by psychologist William Moulton Marston in 1941, marked her milestone 75th anniversary. 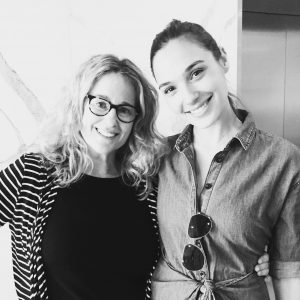 While actress Gal Gadot will wield the golden lasso on the silver screen this Friday, she’s not the only one to slip into the tiara of Princess Diana of Themyscira. One of the longest-running voices of Wonder Woman is actress Susan Eisenberg, who was first heard as the superhero in the 2001 animated series “Justice League” and sequel series “Justice League Unlimited.” She has continued to perform the role for more than 15 years across a range of projects — including direct-to-DVD animated films “Superman/Batman: Apocalypse” and “Justice League: Doom,” as well as video games “DC Universe Online,” “Injustice: Gods Among Us” and “Injustice 2.”

READ MORE: Meet the wonder women behind a new generation of superheroes

Eisenberg shared her thoughts on Wonder Woman with the PBS NewsHour ahead of the film’s release. 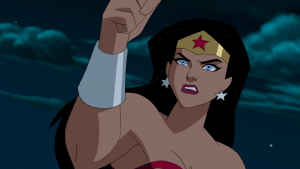 PBS NEWSHOUR: Was Wonder Woman a character that you knew before getting the role on “Justice League”?

SUSAN EISENBERG: I knew her, of course, just because I had grown up with Lynda Carter as Wonder Woman, so I knew her from the TV show. But I wasn’t a comic book nerd, and I learned more about her since voicing her than I knew going in. [“Justice League” series creator] Bruce [Timm] had an idea who she was going to be, and then it was my job to bring her to life through my voice.

So I’ve since gotten to know her a whole lot better than I did when I was growing up.

How did you go about creating your take on Wonder Woman? 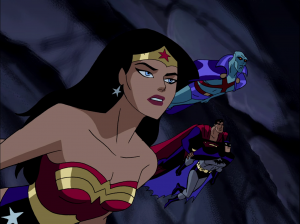 SUSAN EISENBERG: [Bruce Timm and voice director Andrea Romano] were pretty clear about wanting her to sound like a princess, and also like a warrior. So those two pieces of her had to exist and coexist. And so there was a regal quality and a toughness to her voice. I tried to keep that in mind.

We know that she’s strong and she’s a warrior, so that’s a given. Those are aspects to her personality, where she’s a daughter, a warrior, a sister — and all of that just makes her a more complex character to voice. So that’s what you look for in any part, right? It’s joyful to be able to play those aspects of her.

How did your take on Wonder Woman evolve as you continued to perform her?

SUSAN EISENBERG: In the series, there was definitely a sense of getting comfortable with the character. I started on the show really green, and I’d done some animation, but not too much. And Diana, luckily enough for me, was also new to the League.

And she was an outsider, so she wasn’t quite as confident as she became. So I could play that vulnerability a little bit, and especially in the first year of the show, and it was real, because, I was trying to figure out my way through the whole thing. And then as the show continued, I got more and more comfortable. Diana also got more and more comfortable with the League and with these people. So that actually paralleled pretty sweetly.

A scene from the first episode of 2001’s series “Justice League,” where Wonder Woman (voiced by Eisenberg) is a newcomer to the team.

What are your thoughts on Wonder Woman’s legacy after more than 75 years?

SUSAN EISENBERG: I think she’s so many things. I think she’s extraordinary. I think that she completed a trinity and she’s this standalone character that sets the standard not only for women — though certainly for women — but for everyone, because there’s such a fair-mindedness to her. And there’s such a sense of justice and compassion, and she’s beautiful but she’s always strong and compassionate as well. I think she’s bigger than life, and yet, again, one of the things that I loved about voicing her so far is that I get to play the moments of life. It’s just everyday, and then there’s something mythic, and it’s both. 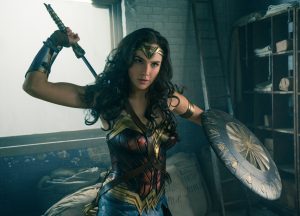 Gal Gadot stars as the titular heroine in the feature film “Wonder Woman” — the first live action solo film for the character since her creation. Photo courtesy Warner Bros.

I have to say, going forward with the movie about to come out, the Wonder Woman film, is long overdue for her. For as popular as she is, I don’t think she’s gotten her due.

I think women are more in the consciousness, and that makes a difference. People are recognizing that women have bought the books and there’s money in those wallets, and they have choices that they make, and they’ll show up at these movies. And obviously not just women. I have the privilege of being told what fans love about her, and there are men that come up to me, there are women that come up to me.

It’s incredible, and it’s a large fan base for her. It would make you cry knowing what a beacon of hope she is to so many people.

Do you see Wonder Woman as a role you’d like to continue to play in the future?

SUSAN EISENBERG: You know, there’s not even a question. I would be honored to voice her for the rest of my career. I pinch myself every time I get to do it. That doesn’t happen often in the business, that you get to play a character for as long as I’ve been able to play her. And I never lose sight of the fact that that’s a gift.

Having the opportunity to meet people like Christie Marston, and become friends with Christie — her grandfather William Moulton Marston created the character of Wonder Woman. And being able to talk to Christie about her grandfather and her grandmother, on whom much of the character is based — that has really been a tremendous joy and perk of this gig. Not only do you get to meet these extraordinary artists who draw her and who have drawn her through the years, but you get to meet people who are connected to people who created her, or who have portrayed her, who have drawn her, who have illustrated her, who have written for her. That’s really something special. When you do a panel and you’re on the stage with the writers, the artists, the creator’s family — I’m just so filled with gratitude that that’s been part of this journey.

Left: Wonder Woman has been saving the world for more than 75 years since debuting in 1941. Still from "Justice League Unlimited"/Warner Bros.