Making Sense: Is it Dumb to Play the Lottery?

We received a fascinating email in response to last week’s installment of Tuesday’s Tool$, an online ‘game’ called “Spent.”

That wasn’t a game, that was more like a questionnaire.

I still have little sympathy for “poor” Americans. I made it through the “game” with a few hundred dollars to spare. And I can’t imagine why there wasn’t any offers for car pooling. There was an offer for renting out the living room to another guy, but hey, I think I can fit a lot more people in a typical (poor) American house than that. And then there were these completely unnecessary expenses, like a gym membership? If I live in the boondocks, I can probably just jog!

Also, I can’t imagine why so much of the choices involved pampering your kids. If I was broke and barely have a job, I would not, for the life of me, go watch a school play. If my kid can’t afford to go on field trips and had to stay at school, good, that gives him more time to do his math homework. And buying your kid ice cream because his friend is getting one? No, not going to happen.

And then there are these stupid things, like lottery pooling. “An alternative to 401(k),” they said? Are you kidding me?

Yan’s email is a cold shower reminder of how some people around the world — and here at home, for that matter — see the issue of American “poverty.” But we also reproduce it because of his last line of derision about lottery pooling. 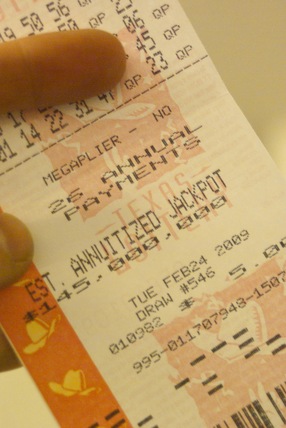 This may seem a tad esoteric, but Voltaire, the French philosopher, made his first fortune cornering the market on a lottery back in the 18th century, buying up all the “tickets” since the pot paid far more than their total cost.

The same situation happens regularly in American lotteries when there’s no winner for weeks on end and the winning pot grows large enough. So for example, if the pot is up to $60 million, and a ticket costs a buck, then so long as your odds of winning are better than 1 in 60 million, the odds are in your favor. Or, to put it slightly more formally, your “expected value” is almost surely positive.

Put yourself in Voltaire’s shoes. If you buy every possible combination — either all the tickets or all the possible number choices — you’re assured of winning. Suppose only 45 million tickets are sold. You buy them all and make $15 million, guaranteed. The mechanics of such a strategy being cumbersome at best, lottery pools have grown up to lower the transaction costs. They are all over the Internet.

We’re not recommending any, of course: what do we know? There may be frauds galore. And, of course, the lottery poolers will take their own cut, just like the folks who run lotteries. Plus, one must never forget: the odds only tilt in one’s favor when there’s a larger pot than the odds of winning. And even then, if several tickets turn out to be winners, the pot will be split.

But no, Yan, theoretically, at least, lottery pooling is not ridiculous.