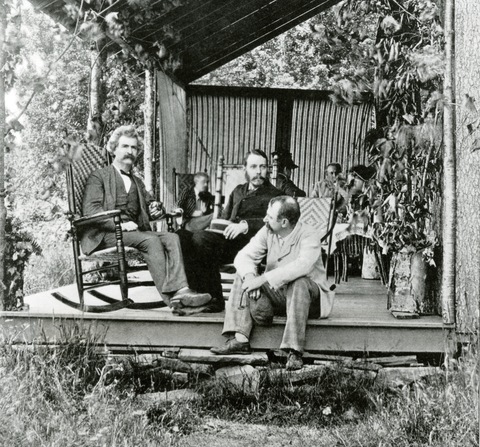 Mark Twain had a lot to say, and most of it was funny. Reading his novels and essays, it doesn’t seem like he pulled his punches; he said what he wanted, and a lot of it was pretty radical for the times. But as it turned out, he restrained himself greatly, not publishing many things he wrote and wanted to write. In the last few years of his life he dictated his autobiography — not a cradle-to-grave account of his life, but a series of thoughts and feelings he wanted to share with the world.

But not right away.

He decreed that the autobiography be withheld from publication for a hundred years after his death (and in one case 400 years!), probably not to insult and injure his contemporaries or his own family. He died in 1910; this is 2010, and the University of California, Berkeley, and the Mark Twain Project, housed there, are finally publishing the autobiography of arguably America’s greatest writer. That’s the subject of a report by producer Joanne Elgart Jennings, cameraman Jason Lelchuk and me on Wednesday’s PBS NewsHour.

Putting the autobiography together and sustaining the work has not been easy. The Mark Twain Project has been examining and editing Twain’s papers since they arrived at in Berkeley in the 1940s, on orders from Twain’s only surviving child, Clara. Editors working in Bancroft Library have sifted through a million pages of manuscript and typescript, publishing new, annotated editions of Twain’s works, with voluminous footnotes explaining where Twain got his material, where he was accurate, what the words no longer in our language meant. There are 10,000 letters Twain wrote in the collection — perhaps a fifth of all the letters he wrote. It’s tough, detailed work to document practically every move in the writer’s life.

And not without controversy. Funding for the Mark Twain Project was in jeopardy several times, as some scholars and politicians questioned whether it was a good idea to spend government money from the National Endowment for the Humanities to trace the life and works of one humorist.

At Berkeley, they work on what are called textual editions that focus on the problem of how the text should read, given the various documents that support it. The kind of work done by the editors is no longer in vogue among many academics, according to Robert Hirst, the general editor of the Mark Twain Project.

He says English departments – including UC Berkeley’s — aren’t interested any more in researching the author and when and why he wrote something: “It is …unfashionable to teach this kind of stuff…”

He bemoans the fact that graduate students don’t even learn about textual editing.

Still, the project has survived for half a century, and there is plenty of Twain material in the “vault” that remains unpublished and undiscovered.

Among that unpublished material is a bright little essay called “Concerning the Interview” that Twain dashed off in 1889. Hirst read it in its entirety for me and the PBS NewsHour audience.