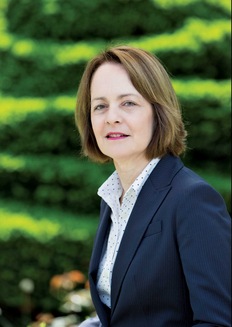 A new collection from poet Mary Jo Salter hits bookstores on Tuesday. “Nothing By Design” is a mix of light and dark. In it, Salter explores the end of a marriage, the loss of friends, having fun with MFA programs and responding to “The Waste Land” in a three-line poem called “T.S. Lightweight and Ezra Profound”:

Give Ezra his due credit
for that amazing edit.
Still, T.S. is the one who said it.

We caught up with Salter Tuesday morning by phone from her home in Baltimore. You can read our conversation below and listen to Salter read two poems from the new collection.

NewsHour: Mary Jo Salter, thank you taking the time to talk with us. Your new book is “Nothing By Design,” and it is broken into sections. And the sections address different stages of your life. Can you tell us about how the book was constructed and why you chose to break it up in this way?

Salter: Thanks so much for having me. “Nothing By Design” was a rather late title for the book. It struck me as being right only after I looked at the poem from which the title comes. It is embedded in another poem about a divorce where I try to believe there is nothing by design, a sort of no-fault universe. But of course, I think in another way. Any artist is trying to make a design either in a poem or in any other form of art. And I am a particularly formal poet anyway. And so in a way what the title has come to mean for me is there may be no fault in the universe, there may be nothing by design, but on the other hand, by design, by means of art, I hope to address some of that nothingness.

There is a section of poems called “The Afterlife.” There are quite a few elegies in the book. But all along I have been writing light verse. I have always loved light verse and I knew pretty early I wanted to include some silliness right in the middle of this rather dark book.

NewsHour: As you said, you are a formal poet. How did you grapple with and use the forms here? 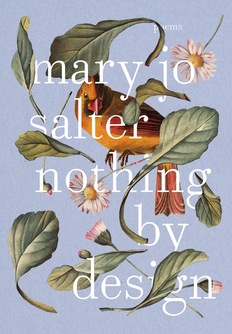 Salter: I try to let the subject and the mode I’m in talk to me. And sometimes I don’t know for quite a long while what form the poem wants to take. There is a Villanelle, a strict 19-line form, and I made it stricter by making it even narrower. I don’t know why I needed to do that, but apparently I did. The poem called “Our Friends the Enemy” which is about the Christmas truce of 1914. It has rhymes in it throughout, but they are irregularly scattered throughout and it is really close to free verse which perhaps has something to do with the fact that poetry itself in English was getting shaken up around 1914. There was music and there was sentiment, but there was also a fair amount of chaos.
You don’t know when you start. I try to let the poem talk to me about what form it is supposed to be in.

NewsHour: Books often change and this book had a long arch. Can you explain the evolution both on the page and for you as you were writing?

Salter: I think when I began writing I thought I would be including a fair number of individual poems that stood on their own and didn’t necessarily connect with other poems. And then found for example one of the themes had to do with war. I wrote the poem about the Christmas truce maybe a year before it came to me I wanted to write about the Vietnam draft lottery. You don’t know when you begin this and don’t know what will go together, but in the darkest period of writing this book, about the middle of writing this book, when I was going through a divorce is when I wrote not only the divorce poems, but most of the funny poems. It was a great boon to be able to start rhyming in ridiculous ways and write a three-line poem about “The Wasteland” and T.S. Elliot and Ezra Pound as “T.S Lightweight and Ezra Profound.” There is something about the process of writing. If you’re writing long, you want to go short and if you’re writing short, you want to go long. There are very long elegies in here and a number of Haiku, for example.

NewsHour: Some of those lighter ones in the section called “Lightweights,” one poem in particular takes a stab at MFAs, the mighty fine artists being churned out from our universities. You are very involved in that — you teach at Johns Hopkins. I’m curious to get your take on how that process has affected your writing career and how you have seen it change the world of poetry as these programs have blossomed over the last 25 years.

Salter: You’re right. The MFA programs have blossomed and they have also, the top ones, have become better and better and better. I’m not just flattering my students or university when I say that the students I have at Hopkins are really remarkable and intend to publish really good books a year or two out of their MFA program. There is no question there is a downside that there is a sameness that can be produced by having too small a group of faculty influencing young minds. I’m pleased to say at Hopkins we’ve been expanding the number of people teaching those young minds, but an impressionable young person is likely, even unconsciously, to mimic his or her teachers. And also to try to write for those publications that mean something to them. One thing I try to do as a teacher is to remind my students, career is great, but careerism doesn’t give you your career. You really have to write what you need to write and wait for the right time, which may be quite a while, before you find the right publication for it. That being rejected is not only the most common thing in the world, but also may just mean you haven’t found your readers yet. I’m trying to help people figure out what they ought to sound like and, yes, to be successful, but in a more internal way sometimes.

NewsHour: Finally, to get back to the idea of light and dark. There is a long tradition of elegy in poetry and here you have taken it to a very personal level. It sounds like it was a therapeutic experience and as you say, brought some light. You wrote a number of the lighter poems at a time of pain. But in some of the darker ones, form and rhythm, I was going back over the poem “Bed of Letters” and how the structure and rhyme scheme — it is sad when you bring out the loss, but then there is clearly love and intimate moments captured in the past?

Salter: I do think there can be something redemptive about sound in poetry. If we hear, not necessarily a regular repetition of rhythm or rhyme, but if we hear certain sounds that chime for us they provide a subliminal consolation even if the subject can be quite dark. I think also there is such a range how one wants to approach immortalizing one’s experiences. We all try to do that even if we just write a letter or diary entry. But what do we want to remember about for example, a person we have loved that has died. I think most elegies are a combination of a tribute to the very specific and irreplaceable qualities of a particular person. And also, just the general slide into oblivion where we all seem to be headed. So it is partly about, does life mean anything? But it is also partly about you mean something to me and I’m not going to forget that.

NewsHour: Mary Jo Salter, the new book is “Nothing By Design,” thank you for taking the time to talk with us.

Propped like a capital
letter at the head
of what was once our bed,

I’m writing you this note
folded in sheets you lay
on them, but sleeplessly

night after night, a man
whose life became about
the fear of being found out.

Rarely a cross word
between us, although today
I see the printer’s tray

of your brain, the dormant type
sorted in little rooms
to furnish anagrams,

fresh headlines, infinite
new stories in nice fonts.
Give her what she wants,

you must have thought, and brought
home seedlings to transplant
in flower beds, unmeant

to bloom into such tall
tales — which even you
can’t unsay or undo.

And yet it’s true that long
ago, two lovers dozed
naked and enclosed

one history between covers.
We woke and, shy and proud,
read our new poems aloud.

“A Toast For Richard Wilbur”

On the occasion of the fiftieth anniversary of his first book, “The Beautiful Changes.”

Poems like yours are, frankly, hard to beat— snapping and flapping from each line like a deceptively blank sheet that turns into an angel — but of course the image isn’t mine;
your poems inspire the rest of us to chat.

So, while I’m out borrowing, let me steal another angel from your brain. I’m thinking of Bruna Sandoval in your “Plain Song for Comadre,” who mopped the church floor seventeen
years, and daily saw her tinted pail

of scrubwater take the sheen of heavenly wings. For fifty years the beautiful change you’ve wrought upon the plainest things of this world has been like that — a private labor to estrange
the eye from yesterday, so that it brings

forward the clean habit of surprise. To become a “giver of due regard” you prayed to Saint Lucy once. I rise before you, glass raised, to insist that regarding you was never hard,
you know for whom seeing is the keenest praise.