Meet the women of ‘Hijabis of New York’

When Rana Abdelhamid was told by a peer at school that she was “very normal,” she was taken aback. 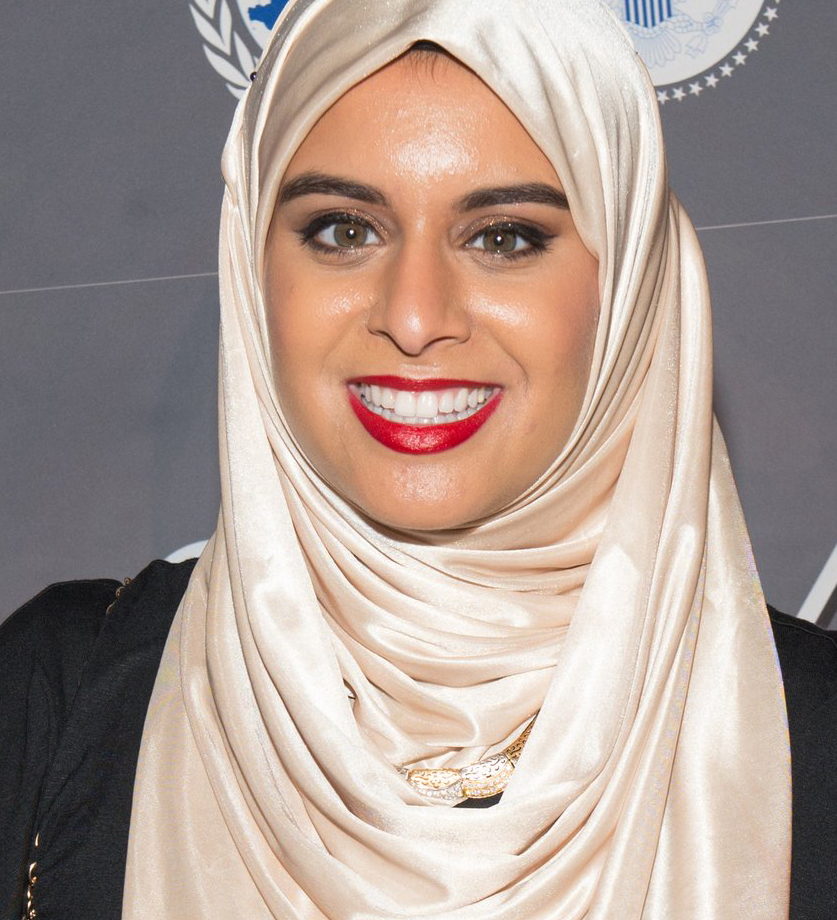 Rana Abdelhamid is the founder of Hijabis of New York.

“What does that mean?” Abdelhamid said. “I felt that people have this idea of a woman who wears a veil as someone very different.”

Abdelhamid, a 22-year-old Queens, New York, native and Harvard Kennedy School graduate student, recognized that other Muslim women may have had similar experiences, and so in 2014 she started the social media project, Hijabis of New York.

Through the project, she is attempting to humanize and diversify the public narratives of Muslim women who wear hijabs. Using photos and interviews in the same vein as the popular blog Humans of New York, the social media project’s Facebook page has gained more than 16,000 fans so far.

“It is creating a space that didn’t exist before,” Abdelhamid said.

Abdelhamid works with several different photographers to conduct interviews that range in subject from the benefits of travel — “Don’t ever let anyone convince you that being a woman means staying sheltered in the home” — to why some women wear the hijab. “We chose to wear hijab to try to reclaim our religion and culture that have been incessantly vilified during our lifetimes,” one woman told her. 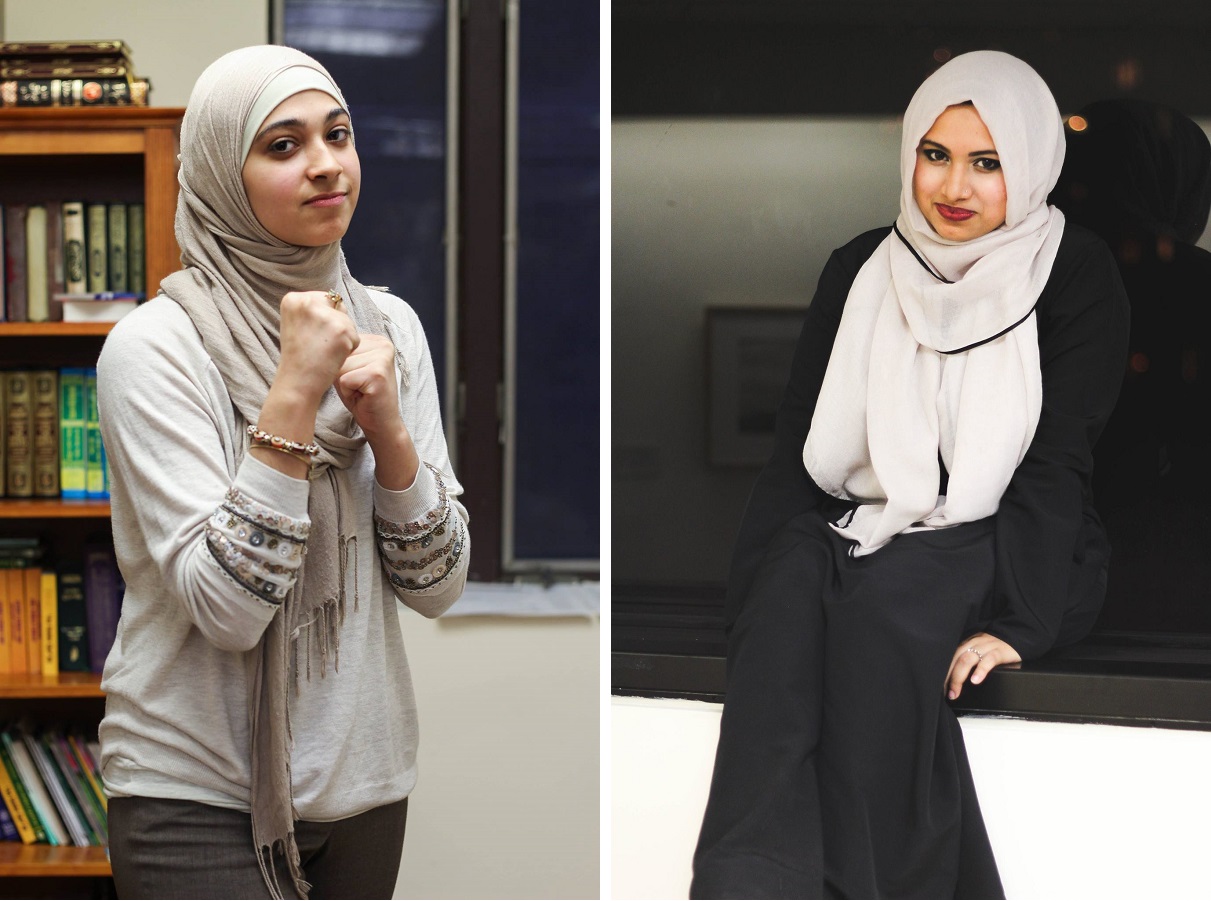 Left: “The most embarrassing moment of my life was probably when I was about 10 years old. I was sitting on a chair in the playground and I was too afraid to use the bathroom so I peed my pants and some little boy saw and made fun of me with some other kids. What I learned from it was to not care what others think even though peeing your pants is a little out of sorts, but just for the record I don’t pee my pants anymore.” Photo by Jiniya Azad
Right: “If you don’t have your community in high ranking positions across all fields – how do [you] expect change? A room full of doctors will only aid in one way. We need politicians, we need archaeologists, we need chemists, we need computer scientists. We need all of these.” Photo by Aniqa Hassan

“You’re going through the pictures and you see how many of these women are really successful, have all these ambitions or have their own stories,” Abdelhamid said. “It seems really simplistic because obviously everyone has their own story … but there is this constant image that is being fed to Western society as a whole as to what it means to be Muslim.”

The process of interviewing subjects and setting the scene for photos fascinated Abdelhamid, who had no prior experience in photography.

The hijab — and, more broadly, Muslim fashion — is making its mark in Western fashion. In January, popular fashion brand Dolce & Gabbana released images from its first hijab and abaya collection. Last fall, global retailer H&M featured Mariah Idrissi, a hijab-wearing model, in an ad campaign. The Muslim fashion industry is expected to be worth $484 billion by 2019, according to a 2014-15 report by Thomson Reuters and Dinar Standard. 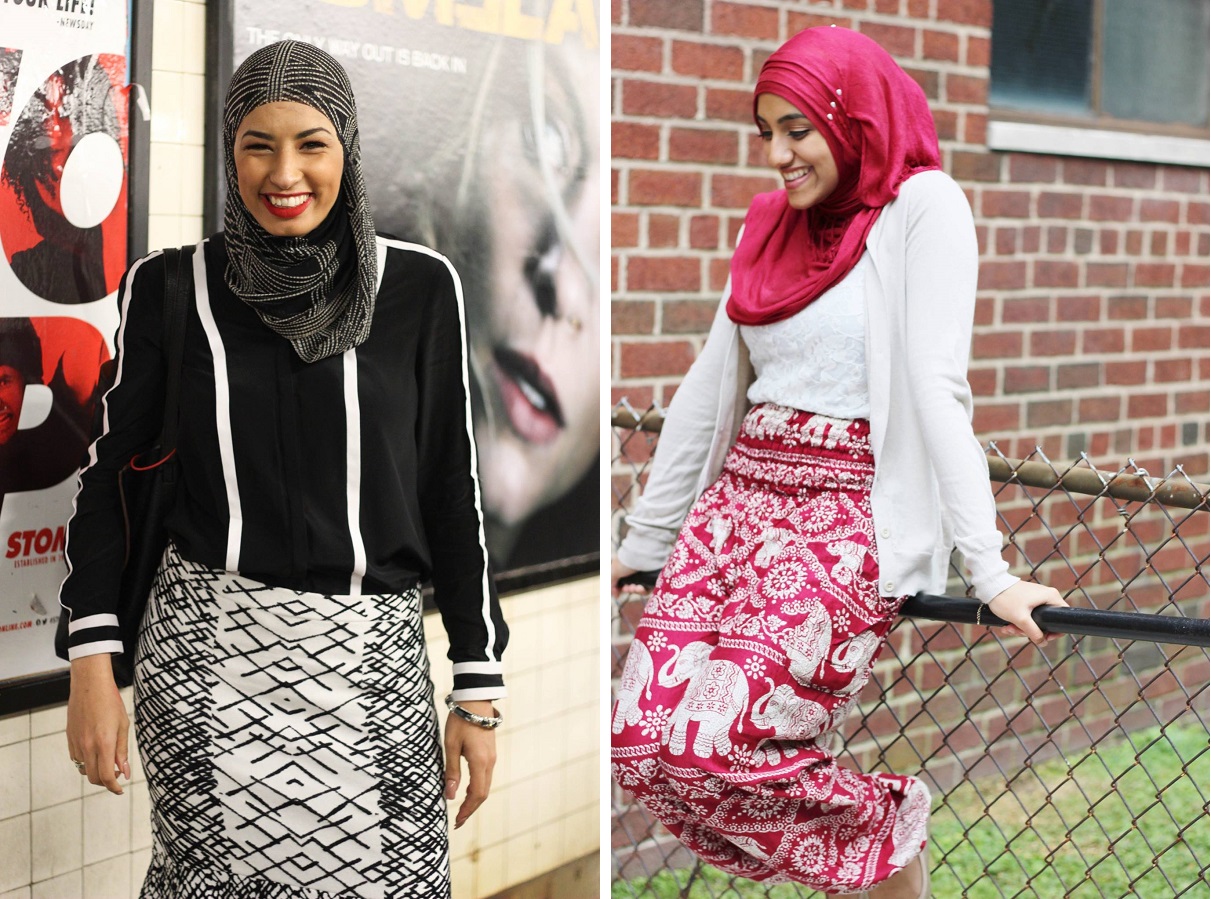 Left: “What is most precious to you?” “My value as a human being.” Photo by Aniqa Hassan
Right: “I don’t think I’ve ever been happier. Since college started, I’ve had lots of time to think about how blessed I am to be able to continue my education…it’s something I’ve learned to value and love. I used to complain about school a lot, but I realized that there are so many people around the world who would do anything to be in my position. That’s why I love learning so much – not a day goes by when I don’t feel like one of the luckiest people in the world.” Photo by Aniqa Hassan

In addition to producing Hijabis of New York, Abdelhamid is the founding president of the Women’s Initiative for Self Empowerment, a leadership and self-defense organization. Abdelhamid, who is a black belt in shotokan karate and teaches classes, founded the organization when she was 16 after surviving an attack by a man who tried to remove her headscarf.

“I remember feeling a tug at the back of my hijab,” she said. “I turned around and there was a broad-shouldered man trying to reach again, trying to physically attack me and take off my hijab. I was able to get away from that, but I was left feeling very vulnerable … Because of that moment, I felt there was something that could be done to bring together Muslim women who are faced with these challenges.”

Abdelhamid said that her projects alone will not change perceptions of Muslim women or decrease violence against them, but they are an important step in the right direction. She plans to expand the social media campaign beyond New York and has already featured photos from Madrid and London.

“There are hijabis everywhere, and their stories are part of the fabric too,” she said.

See more photos from the project below. 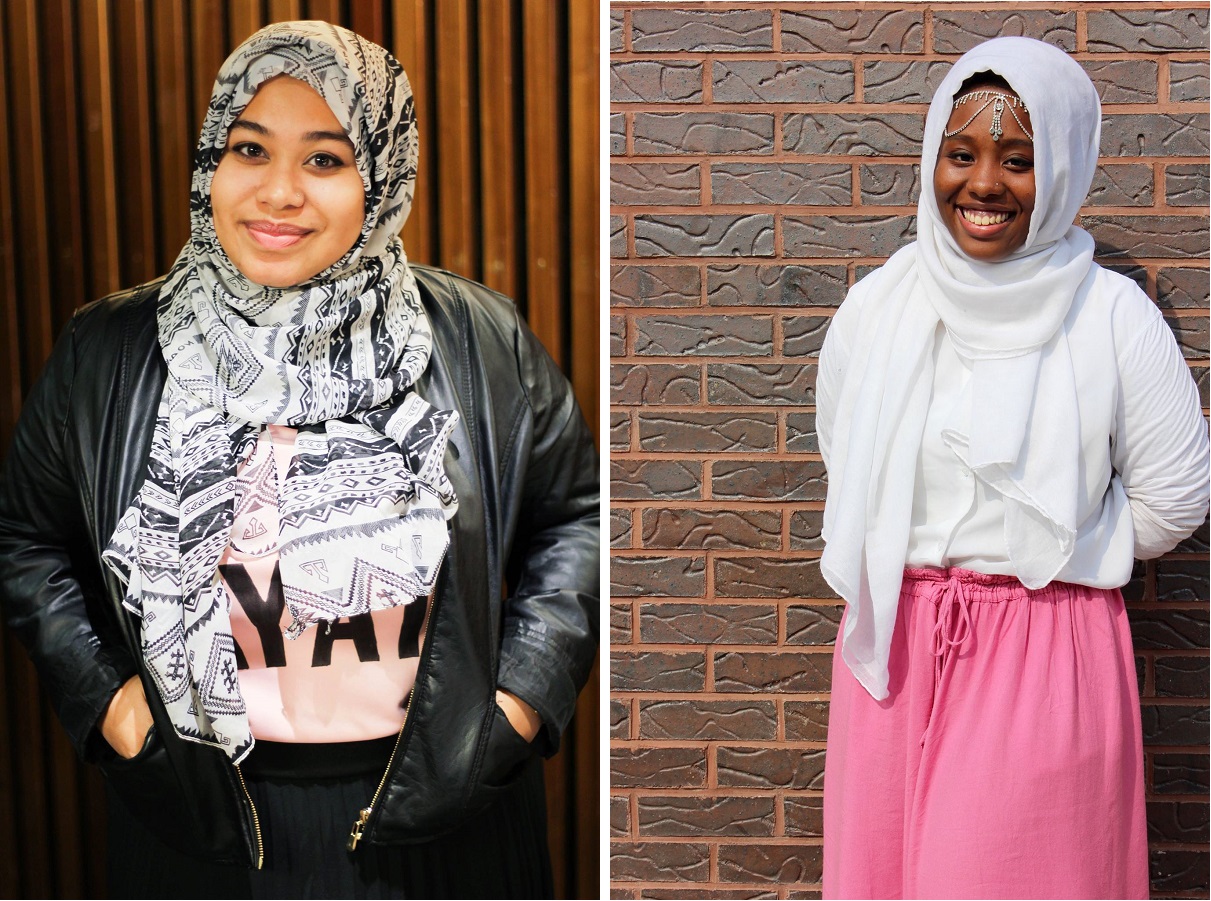 Left: “I remember reading a post where a sister commented ‘I own my piece of space and am unafraid and unaffected.’ I was immediately drawn to this because it’s how I would usually describe myself – always being able to go out and travel far worry-free alone, talking to fellow train riders or giving them a smile, etc. But recently, I’ve been feeling quite uneasy.” Photo by Aniqa Hassan
Right: “What was your inspiration to become a spoken word artist and to do what you do now?” “My biggest inspiration is that when I was little, since I’m the youngest of five children, my dad always had this saying that children should be seen and not heard so I was kind of always silenced which was also because my dad knew that I was extremely, overly opinionated and in a good way. However, sometimes adults don’t always gel well when a five year old is telling them why they’re wrong so I was always silenced in that way. This pushed me towards writing down my thoughts and through that came poetry.” Photo by Aniqa Hassan 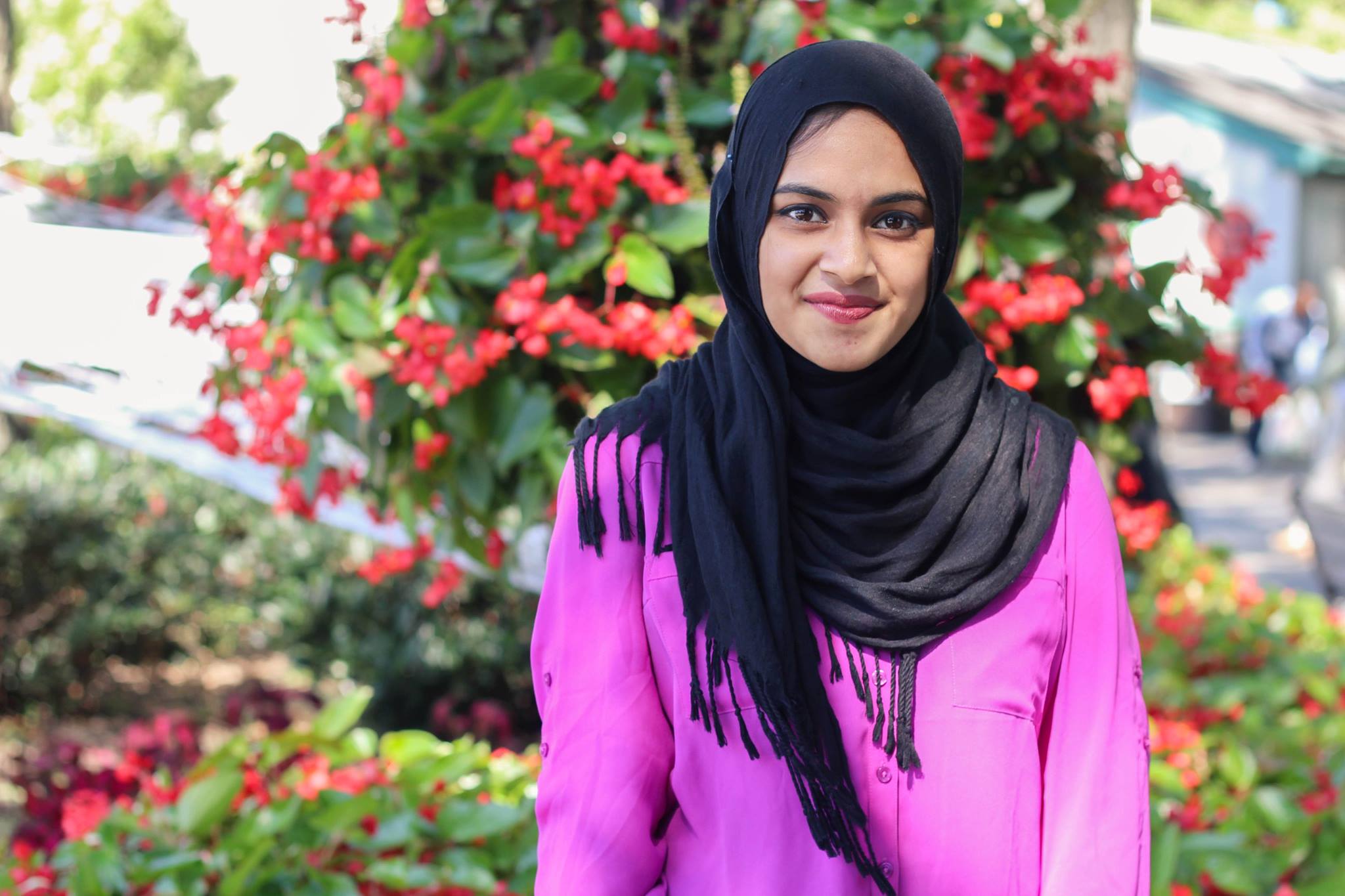 “My family is what I would say is the best part of me. My parents and brothers are a part of my identity. I can always change who my friends are, but I can never change how I am defined by my family. I think that this makes the bond that I share with them disparate and unique.” Photo by Aniqa Hassan

Left: "Don't ever let yourself believe you have experienced the world, until you have traveled. Don't ever let anyone convince you that being a woman means staying sheltered in the home. Don't ever allow your youth pass by you without challenging yourself by going beyond your comfort zone.” Photo by Jiniya Azad