Meet the wonder women behind a new generation of superheroes

As a young woman of color, Ariell Johnson felt that the comic books she read were written with other people in mind, i.e. not her. That’s until she found Marvel’s Storm, a black female superhero and member of the X-Men, who can fly and control the weather.

Johnson wanted to give others a chance to find their own versions of Storm, a character with whom they could identify. In 2015, Johnson founded Amalgam Comics & Coffeehouse in Philadelphia and became the first black, female comic book store owner on the East Coast.

There’s a slow but growing movement toward greater diversity in comics. On Wednesday, Johnson took part in “Who are the New Superwomen of the Universe?,” a panel about women in comics at the National Museum of Women in the Arts, ahead of Awesome Con, Washington D.C.’s Comic Con.

“We focus on diversity? This is why.” *photo of all white guys and one green guy pops up*
“Yeah green is fine, brown is problematic.” pic.twitter.com/aFymztFKU3

With the release of the new “Wonder Woman” movie, the topic of diversity in comics is timely. The panel was excited about the new movie, lauding the camaraderie of the Amazon women on the all-female island of Themyscira, and admiring their physical strength (many of the actors were Olympic and professional athletes) on display in the film’s early fight scenes.

But Cocca said in the second half of the film, it was hard not to notice the lack of female characters aside from Wonder Woman. Johnson said she is waiting to see if the sequel features Nubia, a character in some story lines who is described as Wonder Woman’s twin black sister.

The speakers also discussed the importance of treating female comic book superheroes with the same artistic respect as male characters, and raised the troubling tendency for comics to depict women superheroes of color in animalistic and sexualized ways.

Workshops at D.C.’s Awesome Con were also focused on issues of diversity with titles such as, “Making LGBT+ Representation Matter in Fiction,” “#TotallyAwesomeAsians: Creators & Representation” and “Stop Queerbaiting, It’s Time to Be Brave.” 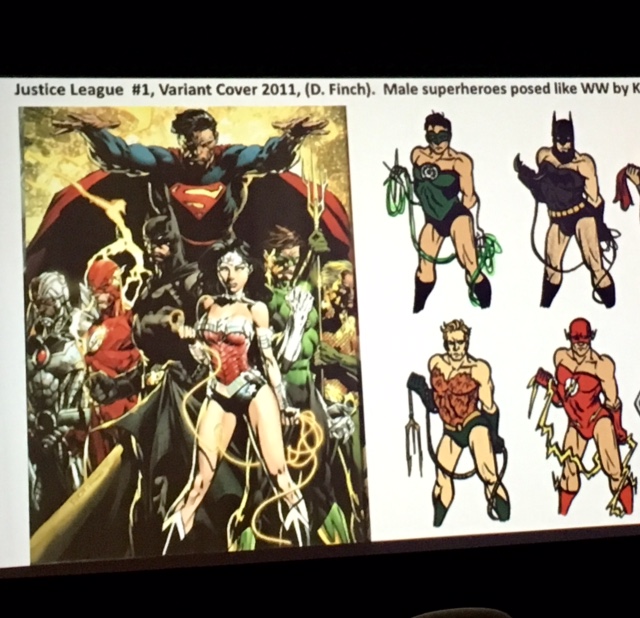 Close-up of photo from slideshow reads: “Justice League #1, Variant Cover 2011, (D. Finch). Male superheroes posed like WW (Wonder Woman) Kelly Turnbull, 2012.” Slide shown by Carolyn Cocca as part of her presentation during the “Who are the New Superwomen of the Universe” event at the National Museum of Women in the Arts.

In recent years, there’s been some pushback to comics moving in a direction that is more diverse or inclusive, a reaction that is not uncommon when progressive movements begin, according to Cocca, a professor of politics, law and gender studies at SUNY Old Westbury.

When Wonder Woman debuted in 1941, women had become a significant part of the wartime workforce, including key roles in the comic industry, said Cocca. At that time, Wonder Woman was seen carrying her trusted friend Steve Trevor to safety. But after the war years, it was Steve Trevor who was depicted holding a distressed-looking Wonder Woman.

By the 1960s, Wonder Woman had renounced her powers and opened up a clothing boutique.  Female characters were no longer portrayed with the same level of gravitas as the males, Cocca said, wearing revealing clothes and increasingly sexualized. The new “Wonder Woman” movie offers a return to a more serious representation of a female main character.

The significance of strong female superheroes was not lost on Woods who got her start by selling her own comic book in the independent section of a comic book store. She recalled going to a convention with photo copies of her comic in hand because she couldn’t afford to bring book copies.

Eventually, Woods was scouted by Stranger Comics’ president Sebastian Jones and Amandla Stenberg (who played Rue in “The Hunger Games” movies) at a comic convention. From there the four-part series Niobe began with Woods as illustrator.

Before she got the call from Marvel, Rivera said it was women who supported, promoted and helped make her book “Juliet Takes a Breath” successful. She credits her family, particularly her mother, for her sense of resiliency. When someone once told her that only her mother would read her work, she said defiantly, “So, my mom is amazing.”

A similar determined spirit led Johnson (her business card reads “Head Nerd in Charge”) to buy a set of comic books each week in college that she would take to her favorite coffee shop to read. A decade later she decided it was time to open up her own business.

Her goal is to make Amalgam Comics & Coffeehouse a “community geek space” for longtime residents and newcomers alike. For those who aspire to bring their own stories and perspectives to the comic industry, her advice is, “Just do it. If you have an idea, write it down.”

Advice to those who want to be in this industry – @AmalgamPhilly: Do it. Just do it. If you have an idea, write it down. @WomenInTheArts

Left: "Who Are the New Superwomen of the Universe" panel at the National Museum of Women in the Arts in Washington, D.C., ahead of Awesome Con 2017. From left to right, moderator Emily Whitten, Carolyn Cocca, Ariell Johnson, Gabby Rivera and Ashley Woods. Photo by Tiffany Williams