Reporter’s Notebook: the difficulty of getting to Timbuktu

Chief arts correspondent Jeffrey Brown is writing from Mali, where he is reporting for his series “Culture at Risk,” exploring the problems and solutions to arts and culture threatened by war, natural disasters and demographic and technological change.

There’s no easy way to fly to Mali from the East Coast of the United States. No non-stop flights from Washington to the land-locked, very poor West African country. The route most taken (is there such a thing?) is through Paris, but it comes with an eight-hour layover at Charles de Gaulle airport — not something I looked forward to — followed by another six-hour flight to Mali.

I was happy, then, to find an alternative, faster route: Washington to Dakar, Senegal (just seven hours to the western-most part of Africa), an hour-and-40-minute layover, an hour-and-a-half flight to Bamako, Mali. Total travel time of just around 12 hours. It only flew on certain days, though. So I adjusted my trip.

All good, all fine. But we calibrate our lives so precisely these days, right? At least I seem to. That’s how the daily news is: No moments to be lost, everything based on timeliness. What’s happening right now? When do we go on the air and when do we come off?

We are a live television program; the director’s voice in my ear counts down the amount of time for an interview. If your segment comes early in the program, you can go over a bit (though that puts at risk the timing of everything to come). But not if you’re at the end of the show, then it’s “3-2-1, gotta go.”

The people we interview are asked to arrive at a given studio, at a given hour and minute, so they’re ready to go at the ‘hit’ time. We hope — pray — such things aren’t disrupted by traffic, weather, a driver getting lost. All that does happen, but not so often. Somehow, it works, most of the time.

It’s the same with travel, right? Who likes to live on planes and in airports? So we look for the best connections, the quickest trip from here to there. Most of the time it works. But then, there I was at Dulles Airport, sitting on board a South African Airways flight at the gate that was all ready to go. Except we had to wait for several passengers. I don’t mind that — I’ve been one of those passengers plenty. But the wait went on.

There was a bit of confusion about why exactly we were waiting. Then there was the snow that had started to fall and fell harder the longer we waited. When we finally did pull back from the gate we were told we had to get into line for de-icing. Good, let’s be safe. You know the rest. 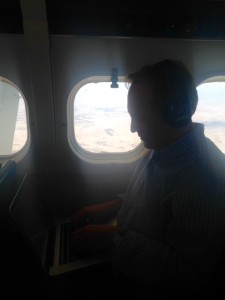 Chief arts correspondent Jeffrey Brown writes as he flies over the Sahel region of northern Mali on the way to Timbuktu. Photo by Molly Raskin

We left two and a half hours late, I missed my connection in Dakar — in fact, I saw the plane I was supposed to be on taxi-ing past us in the other direction when we landed. Missed it by, oh, 10 minutes. Is that a long time?

Only then you learn that there are no other flights on to Bamako — just an hour and half away — that day. Enjoy your day in Senegal. Which I did, as much as I could, wracked with frustration. I went downtown, sat having a coke while looking out over the Atlantic Ocean back toward home, took the ferry to Goree Island, the famous slave trading site that’s now a memorial and pilgrimage trip for many people.

But the 10-minute missed connection grew into a greater disruption.

Flying the next morning, I wouldn’t make the plane we’d lined up to take us to Timbuktu. The ancient “city of gold,” the “end of the earth,” was overrun by militant groups two years ago before the French army came in and pushed them out. It’s safe to visit — we were told — but there are still no commercial flights in, so we’d arranged to fly with a UN mission plane. Now we were missing that.

Could we go the next day? Well, no. The protocol requires filling out all these forms. But we’ve done that already, right? Yes, but they must be reprocessed, which takes at least 72 hours. What? We’re not getting to Timbuktu because South Africa airlines held my plane for a few strays, if that’s what it was? Mild panic sets in.

In the meantime our very resourceful fixer (a local producer) in Mali is working every angle he can to get us to Timbuktu. And there is another flight, he learns, also overseen by the UN, but this one is for NGO aid groups. Might there be seats? Maybe, we will let you know. When? Later. And, if not? Then, not. Oh, and we might be able to get you there, but then there’s the question of finding seats on the plane the next day to get you back to Bamako.

Disaster looms for us, though we try to not to talk of it. For these trips, these stories, we calibrate the details so finely – the days away, the money spent, the interviews to be done, the shots we have to get, the places we have to get to. Take out one thing and it can all unravel. 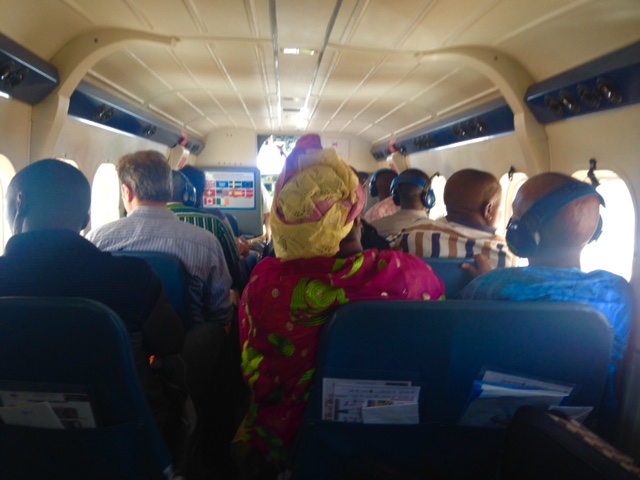 The World Food Program airplane to Timbuktu was crowded, making stops in Mopti and Gao. Photo by Molly Raskin

We start our work in Bamako, wait, checking for emails or calls all day. Finally, an email: we can confirm seats on a flight tomorrow. Great! The email continues … but at that moment the phone goes dead, out of power. Wait, what else? Do we have a flight back? Will we ever get back? (There’s that transatlantic flight pending once again, of course.) We wait a few minutes for the phone to power up to learn that the return trip “looks good,” but will have to be confirmed later. Perhaps I won’t live out my days in Timbuktu after all – but I might.

I write this on a small 12-seater plane as we head to Timbuktu. “Head” that way, that is, slowly. This plane goes where it goes and where it’s needed and we go with it. We’re just lucky to be on board. First stop, an hour and 50 minutes away, we’re told, is Mopti. After that, another stop in Gao. And I just learned that that flight is another hour and 40 minutes. The distances aren’t great — the plane is slow. Then, sometime this afternoon, we’re supposed to land in Timbuktu. I’ll let you know.

In the meantime, the earth below has turned brown and parched and looks extremely dry, with very little vegetation. We’re heading north, following the Niger River, toward the Sahara.