On the late November night that a grand jury announced it would not indict the police officer who fatally shot unarmed teenager Michael Brown in Ferguson, Missouri, Natasha Bahrami watched protesters peacefully take to the streets of St. Louis. Bahrami is a lifelong resident of that city and co-owner of a local restaurant, Cafe Natasha’s.

Late in the night, the mood of the protests changed. Bahrami recalls people running and picking up debris to smash windows. She watched from her house across the street as several protesters bashed in nine windows at the cafe, which her parents have owned since opening it in 1983, and where she crawled as a toddler and worked as a teenager.

“People say, ‘Wasn’t that terrifying?’ And I don’t think ‘terrifying’ describes it … it was heartbreaking,” she said. “It was more, ‘This really didn’t have to happen, yet it did.'”

Bahrami described the damage only as a symptom of the anger and frustration many people have felt at recent events.

“I don’t blame it on anything. It just happened,” she said. “There’s some severe hurt and pain going on right now.”

Bahrami returned to the restaurant late that night to board up the windows, which looked, in her words, “ridiculously ugly.”

She asked a few friends to help her paint the boards, and before the sun came up the next day, artists had begun gathering to help. Within a few days, the project, called Paint for Peace StL, had spread to Ferguson. 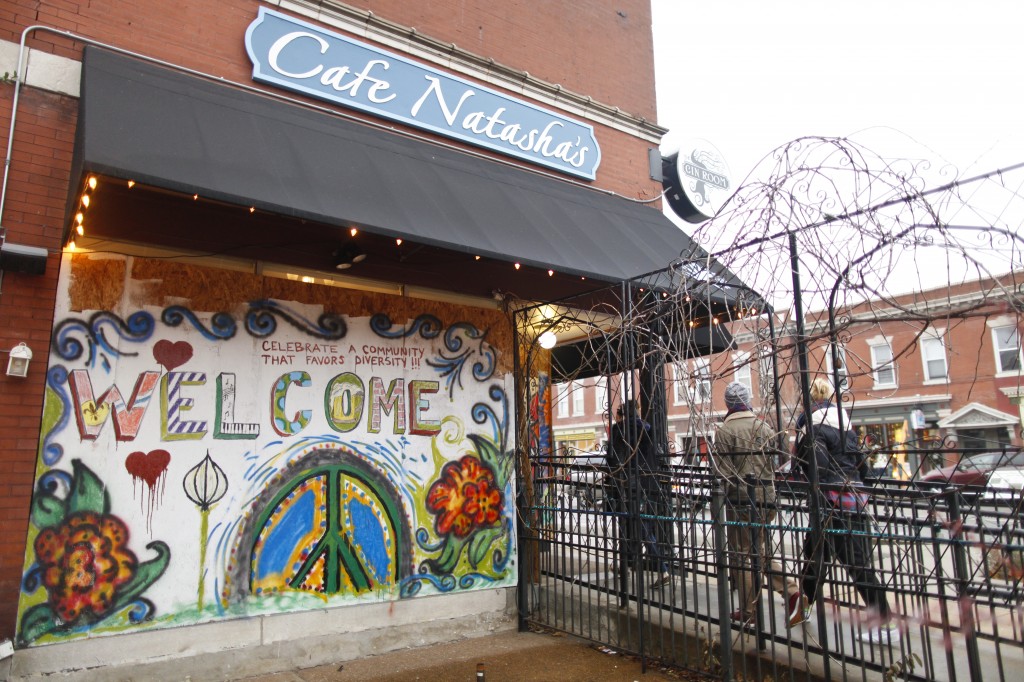 Artists converged at Cafe Natasha’s in St. Louis after it experienced damage during protests. Photo by Miriam Ross-Hirsch

Tom Halaska, who owns ArtBar on nearby Cherokee St., helped spread the word to artists. Between Ferguson and St. Louis, the group has painted approximately 100 businesses so far, he said.

Halaska said that he has not seen many conversations between participants about the case itself. “One thing that we have not been doing is talking about the verdict,” he said. 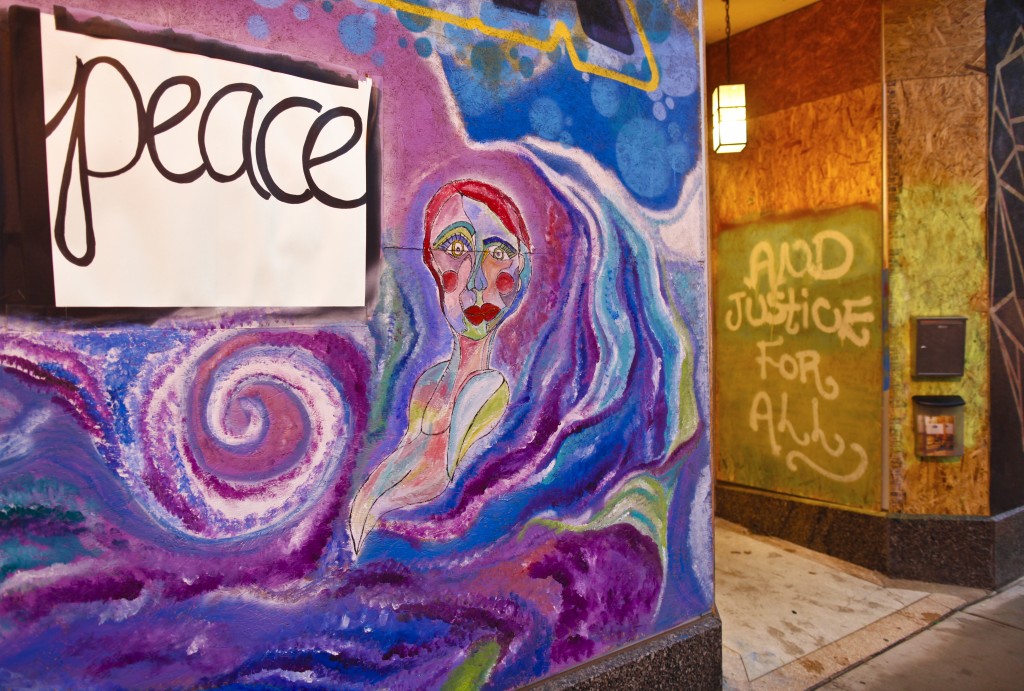 People in St. Louis have used the canvas to express their hopes for peace in the area. Photo by Miriam Ross-Hirsch

Instead, he said artists and community members want to move on with the healing process, and are thankful for an activity that helps that process.

“A lot of the artists came up to me and said, ‘Thank you for giving me an outlet,'” he said. 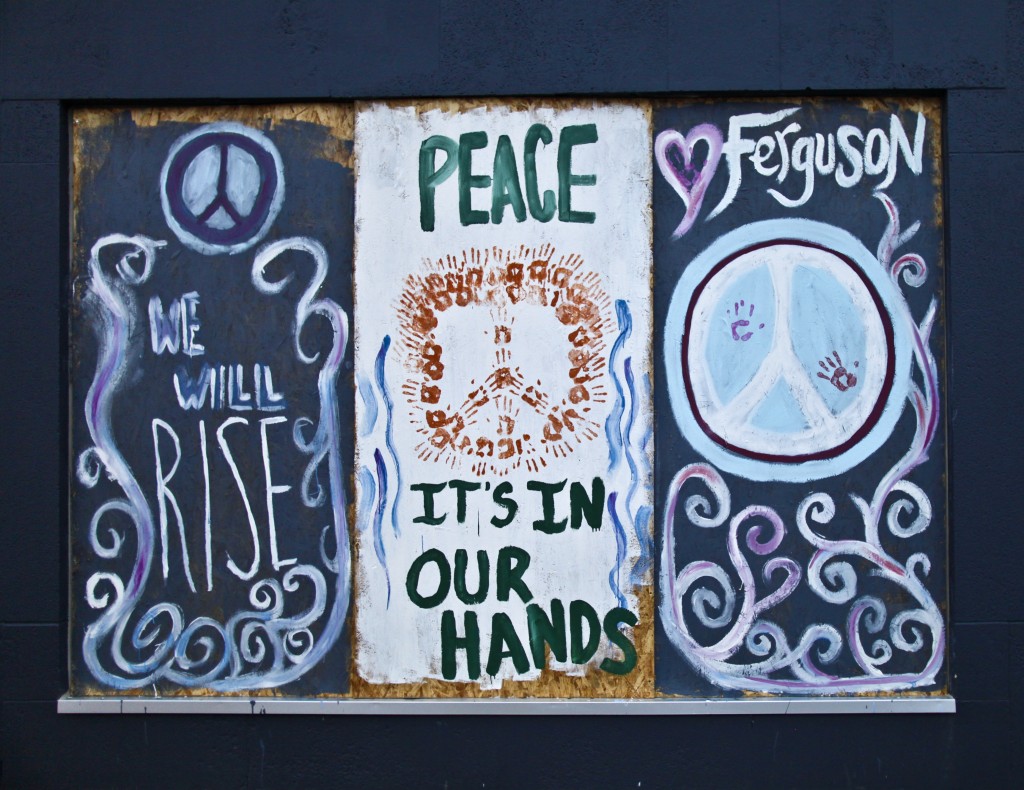 Messages of “love” and “peace” are common on the boards. Photo by Miriam Ross-Hirsch

Bahrami said her conversations with participants have also been focused on gratitude from both sides. “It was a great relief for them to feel that they were part of building us back up,” Bahrami said. “I felt the opposite — that they were helping us heal.”

St. Louis artist Nelson Perez, who painted on S. Grand Blvd. and in Ferguson, said it was a good opportunity to help the community without participating in a debate over the grand jury verdict. “It was my way of being able to make a stance, support a community and care about people that are suffering without anyone getting mad,” he said.

Perez visited Ferguson for the first time to help paint. He described the atmosphere as calm and cheerful. “It was a whole different feel to be there in person vs. what you see when you turn on the TV,” he said. 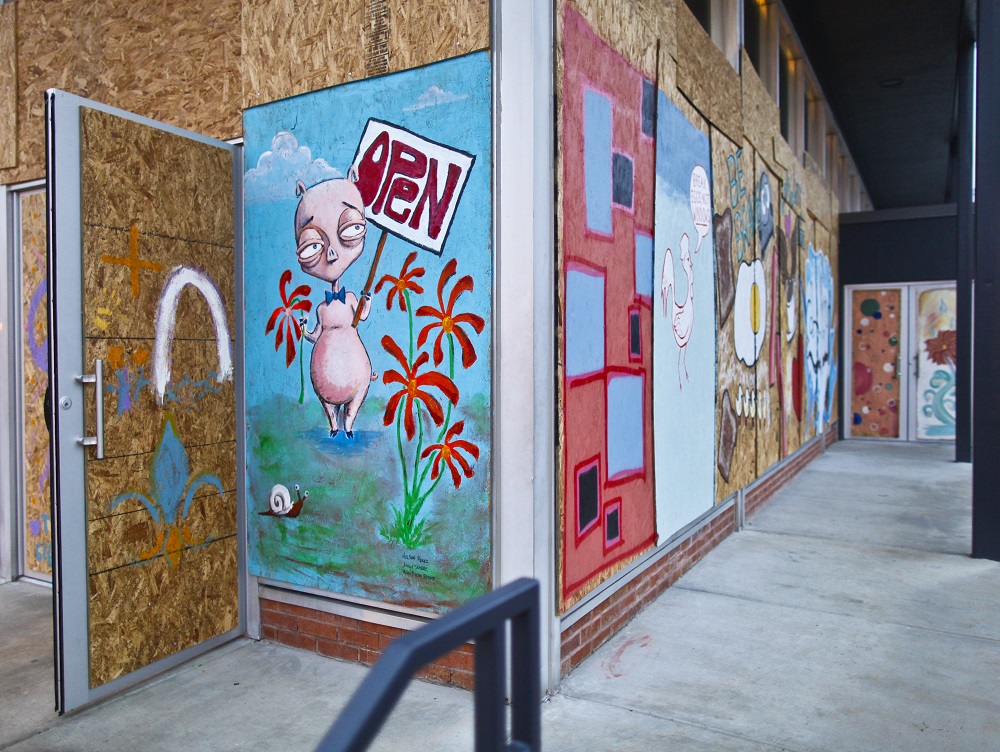 Nelson Perez, a local artist who created the above painting, said he wanted to express his support for the community. Photo by Miriam Ross-Hirsch

Local families and businesses donated paint for the project. Participation is not limited to local artists — all kinds of community members have joined in, according to Bradley Pipkin, a St. Louis artist who went to help paint Cafe Natasha’s the day after it was damaged.

When businesses remove the boards, many will end up at the St. Louis History Museum, and others could be a part of a charity auction for the community, Halaska said.

Bahrami said that while her parents were devastated by the damage to Cafe Natasha’s, the community support has helped.

“As soon as they saw the whole community come out the way that they did, they started losing all of that anger.” 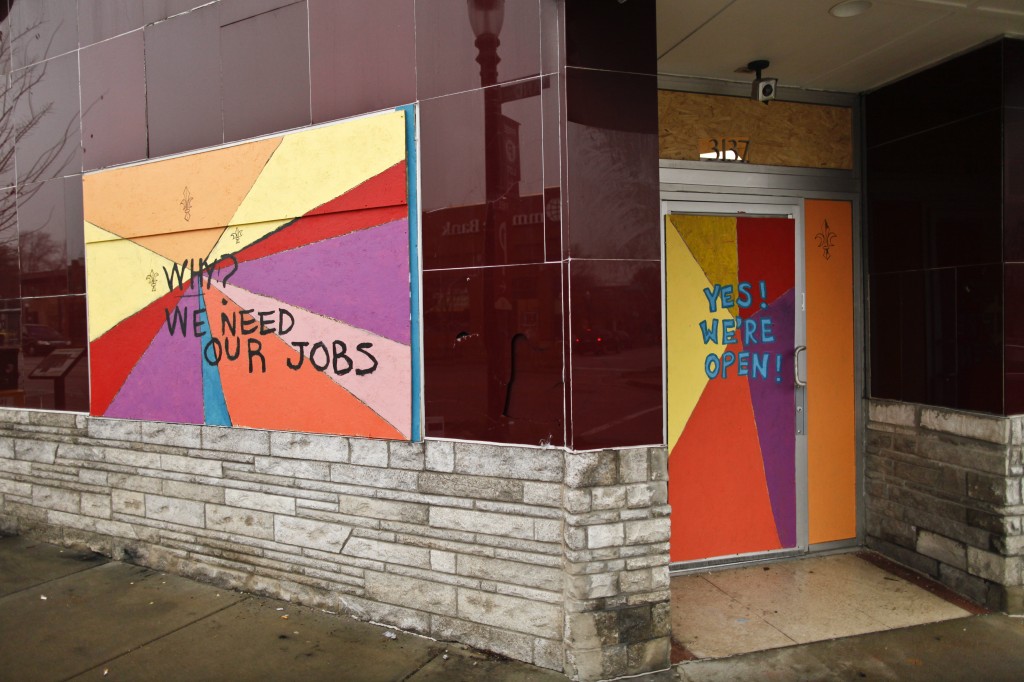 On S. Grand Blvd. in St. Louis, messages range from the spiritual to the practical. Photo by Miriam Ross-Hirsch 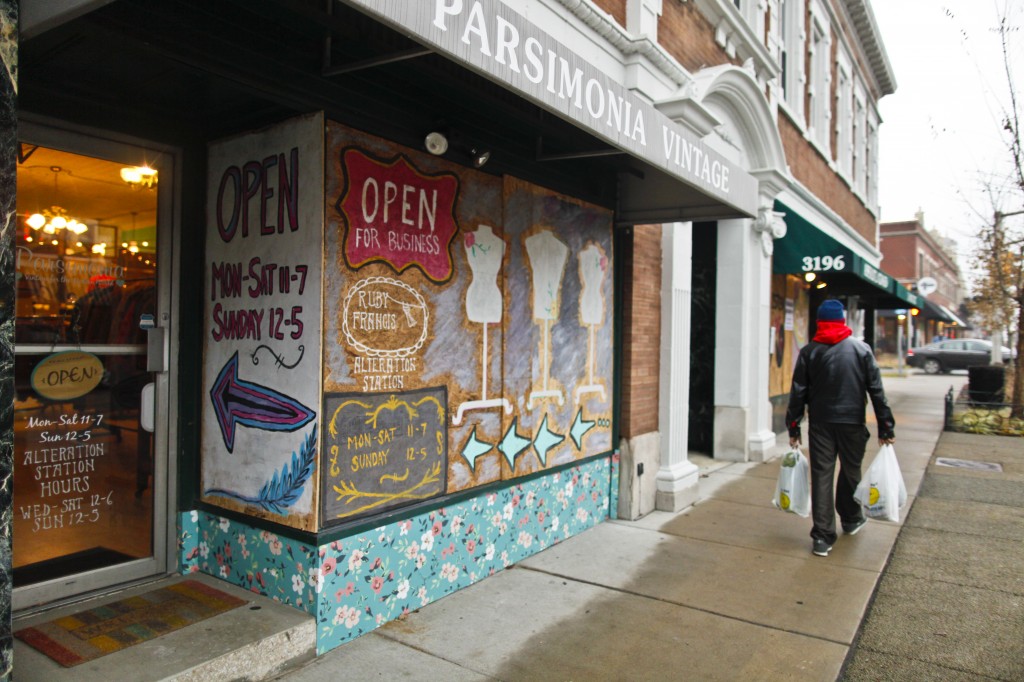 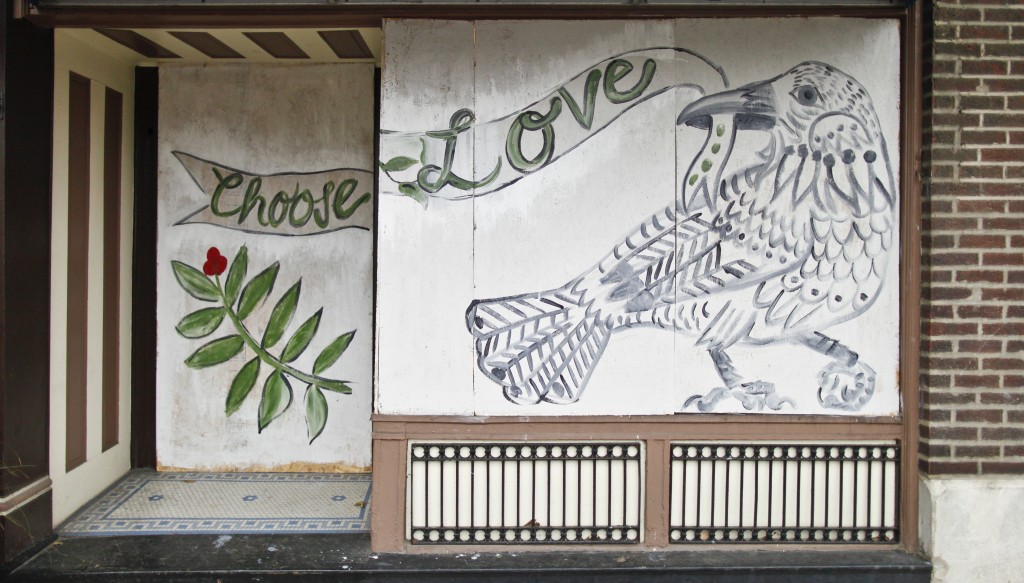 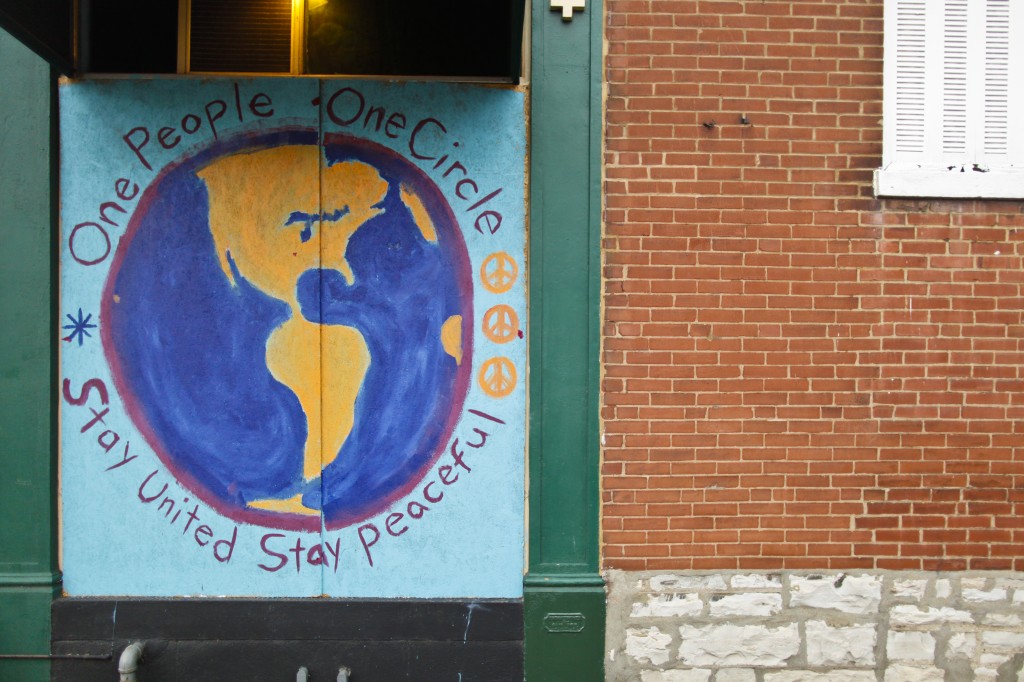 “The media is definitely turning the cameras toward the destruction and the pain and not focusing on the fact that a lot of us are coming together,” Halaska said. Photo by Miriam Ross-Hirsch 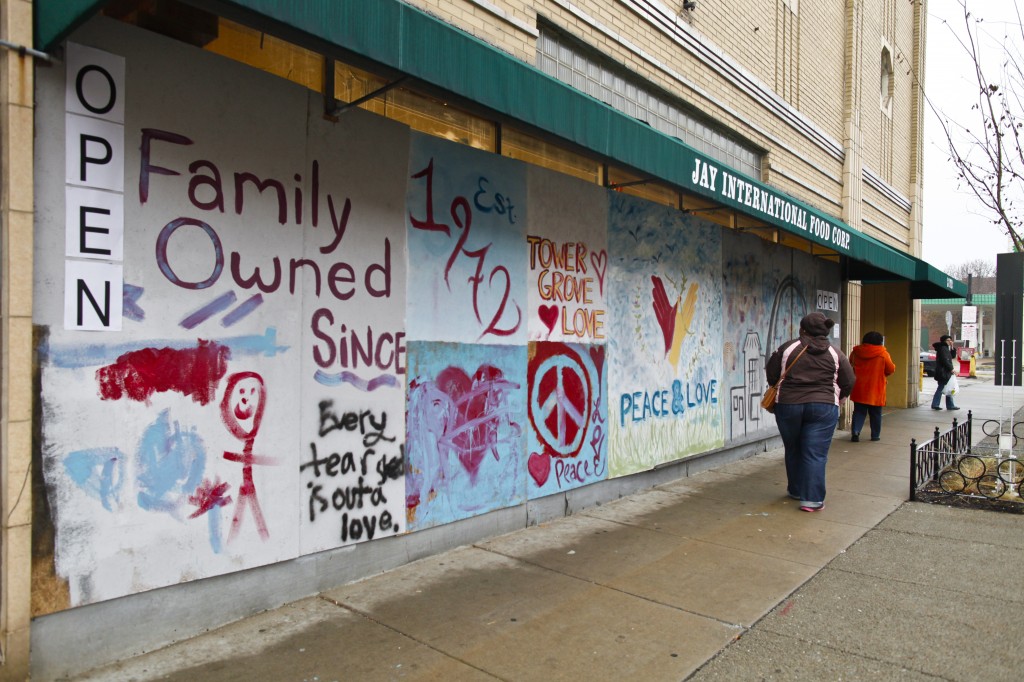 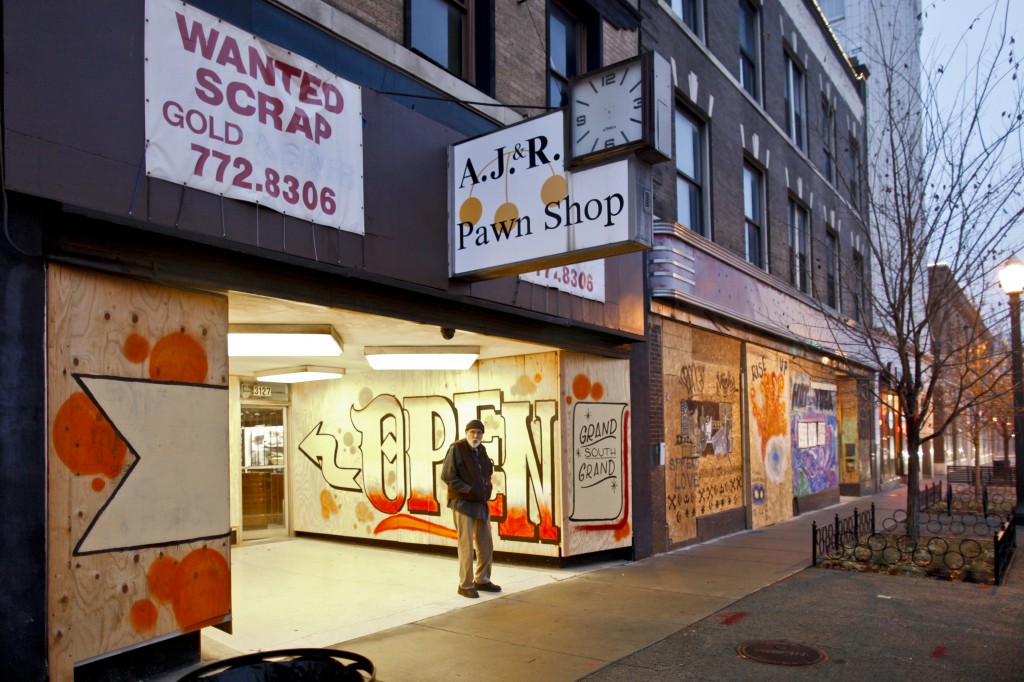 The paintings have helped both artists and residents heal from recent events, participants said. Photo by Miriam Ross-Hirsch