Contenders in the 2016 presidential race have already called for civility in the coming months, but a new documentary out today shows that heated political rhetoric has long been a hallmark of American politics.

Robert Gordon and Morgan Neville’s documentary “Best of Enemies” pinpoints the moment politics became personal on national TV: when ABC News pitted Gore Vidal, on the political left, against William F. Buckley, on the right, in a series of debates during the 1968 Republican and Democratic conventions. The result was brainy theater as the two intellectual giants clashed on-air in several verbal attacks.

“It was an ever-growing attack,” Gordon told the NewsHour. “We saw in the raw footage within two minutes of the first debate, these high-minded guys take the low road. It becomes very personal.”

Neville said that among the many nuggets they found in the archives were the papers Gore had on his lap during the debates. Vidal had spent months doing homework before the debates, and amid outlines of his main points were scripted insults. 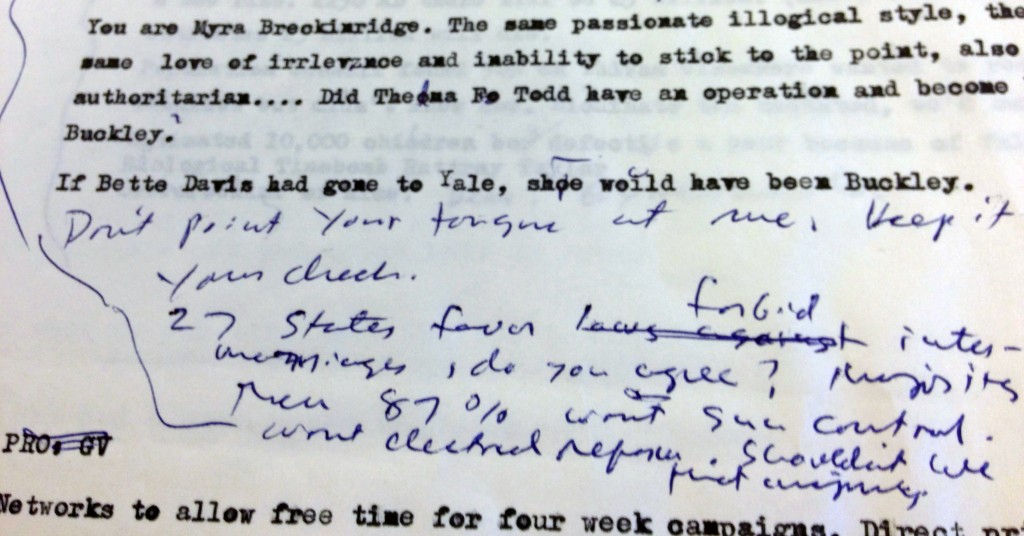 A close-up at Vidal’s notes he had prepared for the 1968 debates against Buckley, including the handwritten put-down: “Don’t point your tongue at me, keep it in your cheek.” Image courtesy of Robert Gordon and Morgan Neville

“[Vidal] has memorized a lot of quips and insults, but not the ones that finally got them into so much trouble,” said Jay Parini, who wrote “Empire of Self,” a biography of the liberal provocateur that will come out in October. What happened later was “spontaneous combustion,” he said.

The watercooler moment came during a discussion over the unpopular Vietnam War. Buckley compared anti-war Americans to Nazi appeasers. Vidal, known for his acerbic wit, could not let that pass:

Vidal: As far as I’m concerned, the only pro- or crypto-Nazi I can think of is yourself.

Buckley: Now listen you queer, quit calling me a crypto-Nazi or I’ll sock you in the goddamn face, and you’ll stay plastered.

During that moment, the ABC correspondent repeatedly called for civility between the two men, but it was too late: Modern political punditry was born. The ratings were too big to ignore, lifting ABC out of its last-place rank among the networks.

The friction between the two men lasted beyond the conventions. They both wrote essays revisiting the televised moment in Esquire. Holding to their grudges, they also battled it out in court.

The “Best of Enemies” filmmakers said the spat in Esquire reopened old wounds for Buckley.

“I think Buckley really felt like he had to answer to himself for something that had happened,” Neville said. “And I think for Buckley it was trying to explain why he lost his cool, when he was the king of not losing his cool.”

William F. Buckley on the right and Gore Vidal on the left attracted a high national audience with intelligence and wit, as well as putdowns and insults. Filmmakers Morgan Neville and Robert Gordon of “Best of Enemies” join Jeffrey Brown.

Both men, it seemed, held a deep-seated grudge that lasted for decades.

“I sat through many a withering night with [Vidal] over a bottle of scotch when he would just go on and on and on and on about Buckley,” Parini, also a close friend of Vidal, said. “He never let go of it. He never forgave [Buckley]. Not once.”

Despite the bad blood, Parini said Vidal still found Buckley to be a worthy opponent in those 1968 debates and even bragged about inventing “modern, combative television.” Parini said Vidal would complain that today’s pundits had no sense of the English language, no sense of American history, nor a command of the facts — a television format that he and Buckley themselves had modeled.