Should museums be able to sell their art? This museum says its future depends on it

When the Massachusetts Museum of Modern Art (MASS MoCA) opened a new facility in June, it became one of the largest exhibition spaces in the country. But on the other side of Berkshire County, another museum is selling off some of its most prominent art pieces in order to stay afloat.

In a highly-criticized decision, the Berkshire Museum will sell 40 pieces from its collection of more than 40,000 works to help pay off some of the $1.15 million deficit the museum has accumulated over the past decade. (It will also go toward plans to remodel and create an endowment). In a statement to the local paper last month, museum executive director Van Shields argued that without a change in finances, the museum would be out of money in less than eight years.

Among the pieces the museum plans to auction off are two paintings by beloved Americana painter and one-time Berkshire resident Norman Rockwell, who donated the paintings to the museum more than half a century ago. His family has expressed concern about the sale.

The Berkshire Museum is also selling works by Alexander Calder, an American sculptor known for his wire mobiles, and paintings by renowned landscape artists Albert Bierstadt and George Inness.

Sotheby’s, who will be auctioning off the Berkshire Museum’s pieces, told the NewsHour that initial auctions will take place in November, though catalog information will be available to the public the month before. The auction house declined to state prices for individual pieces, but said it expected to raise $50 million from all auction sales.

When it announced the sale of these pieces, the Berkshire Museum had also just announced its ambitious plan to reinvent the museum, called “New Vision.” The plan includes a $20 million renovation and the creation of a $40 million endowment.

They’re both part of the museum’s plans to evolve into a interdisciplinary museum that would invest more in connections between science, history and the arts. The museum has a said it is eliminating works that no do not serve interdisciplinary purposes, including “Old Master” and 19th-century European paintings as well as impressionist, modern and contemporary art.

The 40 pieces headed to auction were “deemed no longer essential to the the Museum’s new interdisciplinary programs,” the museum said in a release provided to NewsHour. It is a process down as “deaccession” — one that is controversial in the art community.

The Berkshire Museum will sell 40 pieces of more than 40,000 works to help pay off some of the $1.15 million deficit the museum has accumulated over the past decade.

When Detroit was filing for bankruptcy in 2013, the city also considered the sale of art pieces from its namesake Institute of the Arts. But the state’s attorney general decried the move, calling the art a “trust for the people.” Ultimately, state rescue funds along with private donations stopped the sale.

As for the Berkshire Museum, the American Alliance of Museums and the Association of Art Museum Directors have criticized the plan for deaccession, saying in a joint statement that museum collections were “held in the public trust and must not be treated as a disposable financial asset.”

Locally, the reception has been more mixed. Laurie Norton Moffatt, head of the nearby Norman Rockwell Museum, urged the Berkshire Museum to rethink its plans, especially to sell Rockwell’s “Shuffleton’s Barbershop.” Moffatt called the 1950 oil on canvas, which depicts the view into a barbershop, and served as the cover of the Saturday Evening Post in April, 1950, “a unique masterpiece and one of Rockwell’s very best paintings.”

Moffatt also pointed out that Rockwell had gifted the piece the museum for the people of Berkshire County to enjoy. The Berkshire Museum was founded in 1903 by Zenas Crane, a man inspired by grander American museum institutions of various genres.

The museum has said the sales will go forward. Mass MoCA director John Thompson supported the plan, noting in an op-ed to the Berkshire Eagle that the museum “has barely survived on a crimped, insufficient budget.” He wrote the only thing more difficult than selling off art would be closing the museum for good. Moreover, if the museum did not move forward with its sale, he said, it would have to shrink in size or reduce programming.

But members of the Rockwell family — who also wrote a letter to the editor of the Berkshire Eagle earlier this month — argued pieces like the “Shuffleton’s Barbershop” should be kept at a public institution so that many can still enjoy it.

The other Rockwell piece to be auctioned is “Blacksmith’s Boy — Heel and Toe (Shaftsbury Blacksmith Shop),” a 1940 oil on canvas that was also printed in the Saturday Evening Post. 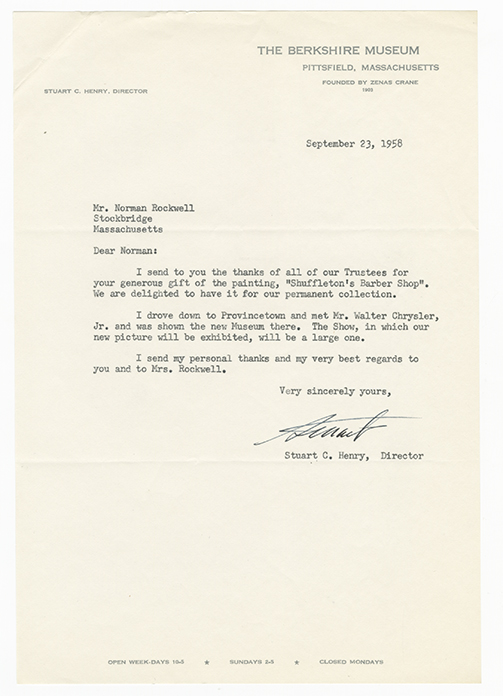 In several letters to Rockwell thanking him for the donation, the director of the Berkshire Museum wrote he was “delighted to have it” and that they had become “great favorites on view.” Credit: Norman Rockwell Museum.

Rockwell, who lived and worked in the Berkshires for 25 years, up until his death, donated the paintings to the museum in 1959 and 1966, respectively. According to Stephanie Plunkett, deputy director and chief curator of the Norman Rockwell Museum, Rockwell had a relationship with Stuart Henry, then the museum’s director, who allowed Rockwell to store works at the museum due to his lack of space in his small studio. In several letters to Rockwell thanking him for the donation, Henry wrote that the museum was “delighted to have it” and that they had become “great favorites on view.”

“Shuffleton’s Barbershop” was last displayed at the Berkshire Museum from January 2013 through October 2015. “Shaftsbury Blacksmith Shop” was on view from October 2015 to July 2017, according to the museum. Both remained a part of the collection but were not consistently display due to space limitations — something the museum’s new plan aims to make room for.

A third Rockwell piece, “Portrait of Dwight D. Eisenhower,” which also ran in the Saturday Evening Post in 1952, will remain in the Berkshire Museum’s collection.

On the other side of Berkshire County, the Massachusetts Museum of Modern Art (MASS MoCA) has become one of the largest exhibition spaces in the country. Watch NewsHour’s report inside the museum: https://www.youtube.com/watch?v=u0ywZQuBsDM

Left: The Berkshire Museum is selling several pieces from Norman Rockwell, seen in his studio, in order to stay afloat, a decision that has caused controversy in the arts community. Credit: Bettmann / Contributor.