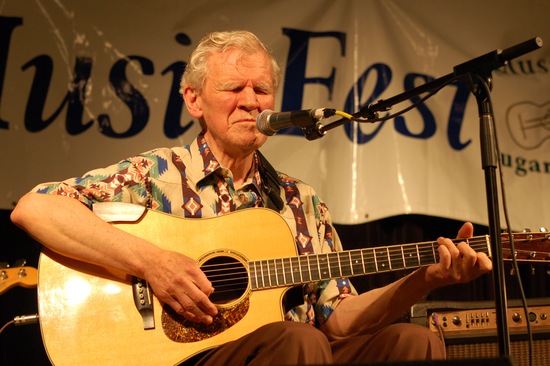 Doc Watson, a legend of folk and bluegrass music, died Tuesday at a hospital in North Carolina, his manager reported.

Earlier this month, Watson fell down at his home in Deep Gap, N.C., and underwent surgery at Wake Forest Baptist Medical Center in Winston-Salem. He was 89 years old.

Watson was still performing up until his death.

“I love music and love a good audience and still have to make a living,” Watson said before a performance in October. “Why would I quit?”

Arthel Lane “Doc” Watson was born, raised and lived most of his life in Deep Gap, N.C. An early eye infection left him blind before his first birthday, but that didn’t stop his father from putting him to work on the family farm or recognizing his musical talents. His father lead the music in their church and exposed the family to all sorts of gospel and old-time music at home.

“What started me in music when I was 10 years old, Dad would come in from work on Friday evening and Jimmie Rodgers the yodeler was one of the favorites [to be played] in the family. And I loved those songs and I could yodel at 10 years old,” Watson said in an interview with Art Beat posted in January. His mother also frequently sang old-time songs and ballads around the house and the first instrument is father gave him was a harmonica.

By the age of 13, Doc had his first guitar and developed into one of the nation’s best pickers. He told Terry Gross on NPR’s Fresh Air about how his father told him if he chopped down all the small trees in their field, he could sell the wood. He took that money to buy his first guitar.

Ralph Rinzler, the musicologist, was an early champion of Watson and invited him to go up to New York to record for Folkways Records. Watson was a still a young man, married with two children at home, and spent what he had on a bus ticket from North Carolina to Manhattan.

“It was something I needed to do and the [bus] drivers were courteous, everyone of them. Most of them come back, I can’t see, and ask if I was hungry. Yes. ‘Got any money?’ No, sir, just enough to buy my ticket and he would take me to a stop and got me something to eat,” Watson said. “Friendly as they can be. It was a thing they did out of a good heart and did not want to see nobody running over me, being mean to somebody, as my dad said. Them bus drivers did not like that either.”

Watson’s career found a boost as the folk revival of the 1960s gained popularity, and he earned a spot on stage at the Newport Folk Festival starting in 1963. He went on to perform and record with his son Merle for more than 15 years until Merle was killed in 1985 in a tractor accident at the age of 36 on the family farm. Three years later, Watson started the Merle Watson Memorial Festival, or “Merlefest,” which today attracts crowds in the tens of thousands.

The winner of seven Grammy awards and a Grammy Lifetime Achievement Award, Watson has earned a number of honors over the years, including the National Medal of the Arts presented by President Bill Clinton. He is joined on tour frequently these days by fellow musician, David Holt. They also teamed up for “Legacy,” a three disc compilation of interviews and songs what won a Grammy. Holt is also a storyteller, historian and host of the PBS series, “Great Scenic Railway Journeys.”

“Doc is such a great singer [because] his emotions are really close to the surface and not just singing some song where the words are not making sense. He has thought about the words and what they mean,” Holt said. “He puts the words to his emotions and that is why they come out powerfully.”