How does rock ‘n’ roll influence our thinking about political events and the world? A new exhibit at the Rock & Roll Hall of Fame seeks to answer that question. 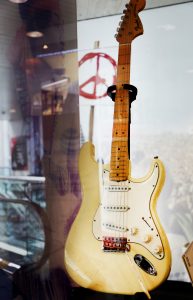 The guitar Jimi Hendrix used to play the national anthem at the Woodstock music festival. Photo by Abbey Oldham

“Louder Than Words: Rock, Power and Politics” features bands and artifacts – everything from instruments and sheet music to clothing – that documents American history through the tunes we rock out to. The exhibit is free all week while approximately 40 events take place at the Hall across four days during the Republican National Convention.

“At its core, some say all rock ‘n’ roll is political,” Greg Harris, the Hall of Fame’s CEO said. “It’s asking you to think differently, maybe to push the envelope, maybe to believe in something that you don’t currently believe in.”

Visitors are greeted by President Bill Clinton’s saxophone, which he played during a 1992 appearance on The Arsenio Hall Show. Right next to that is the guitar Jimi Hendrix used to play the national anthem during Woodstock in 1969. 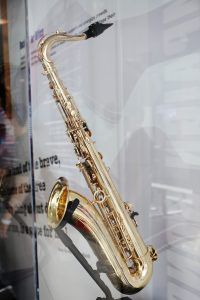 “The performance of ‘The Star-Spangled Banner’ was unplanned,” said Kathryn Metz, the Rock & Roll Hall of Fame’s manager of education outreach. The performance was controversial and considered by some to be disrespectful, in part, because of his “bomb” and “siren” style of playing the guitar during the anthem, she said.

The exhibit goes through the presidencies starting with Dwight Eisenhower and chronicles how rock ‘n’ roll and politics intersected in history. The displays include two guitars owned by John Lennon, including one he used to record “Give Peace a Chance.” Other items include the dress made of meat worn by Lady Gaga, lyrics to “Born in the U.S.A.” written by Bruce Springsteen and costumes worn by the Village People. 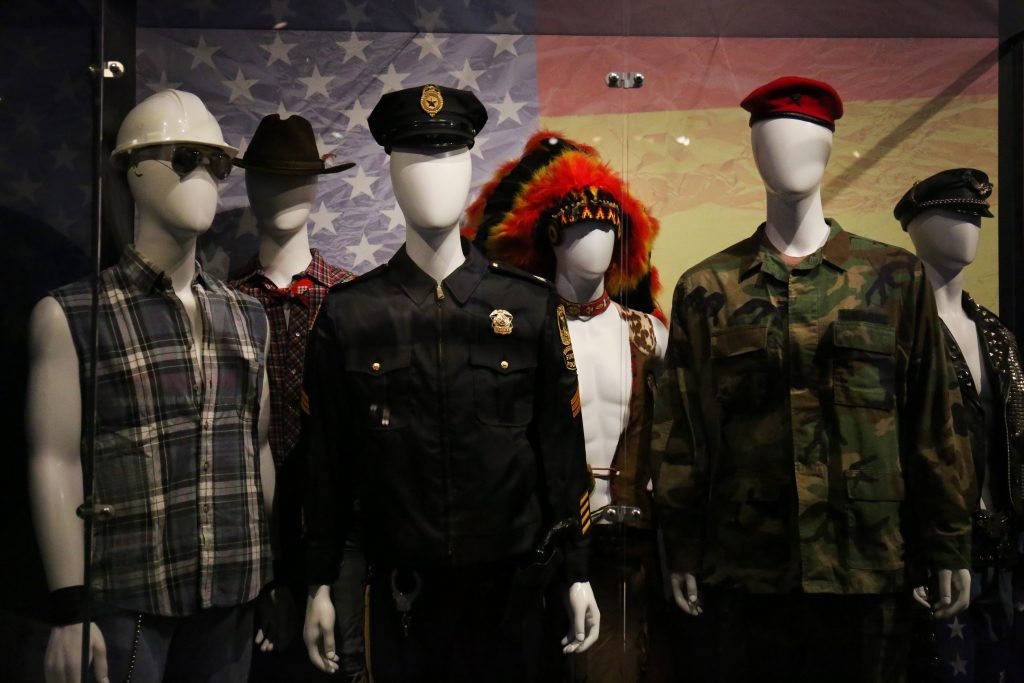 Costumes from the Village People at the Rock & Roll Hall of Fame. Photo by Abbey Oldham

Check out our look at the exhibit, along with the rest of our convention coverage, on Snapchat. Type “pbsnews” and you will find our snap story, which includes a look inside Quicken Loans Arena – the home of the 2016 Republican National Convention.

Left: A new exhibit at the Rock and Roll Hall of Fame in Cleveland, Ohio. Photo by Abbey Oldham