Why musicians are selling old-school records to benefit Planned Parenthood

The A-side of an upcoming 7-inch record plays a Bon Iver song. Flip the record over, and it’s a self-recording of Dr. Willie Parker, an abortion provider in the Deep South, talking about how he faces daily jeers from protesters. That recording fades into a brand new, soulful song from soft-spoken songwriter Sharon Van Etten. Grab a second album, and listen to comedian Zach Galifianakis, and a song featuring musicians John Legend and St. Vincent.

These are the sounds of a new project called “7-inches for Planned Parenthood,” a curated series of recordings from a range of musicians, comedians, poets and writers that will be released in a box set, and also digitally streamed, this spring.

The Kickstarter project The Creative Independent, which is putting together the recordings, said on its Facebook page that “lawmakers with extreme views are working hard to shut down Planned Parenthood” and that “7-inches for Planned Parenthood is a response to this threat.” All proceeds from the project are expected to go to Planned Parenthood, and prominent artists, including Tom Petty and Lady Gaga, are also signing a guitar for auction to benefit the reproductive health group. 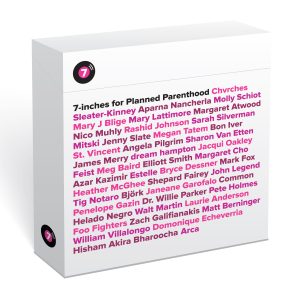 A rendering of the “7 inches for Planned Parenthood” box set. Courtesy of Brandon Stosuy.

The seed of the idea began after November’s presidential election, when TCI’s Editor-in-Chief Brandon Stosuy and Matt Berninger, lead singer of the band the National, decided they wanted to work together to make music to fight back against likely threats to Planned Parenthood’s funding from the new administration.

“We wanted to make something that felt useful and actually was useful, not just another thing adding noise,” Stosuy said in a phone interview, adding that they were inspired by the 1980’s “punk in protest” music, like the music of label Dischord Records, whose bands would release 7-inch records.

Not everyone thinks musicians should get involved in the fights that play out on Capitol Hill.

In the months since November’s election, many other artists, record labels and streaming platforms have worked to raise money for progressive organizations, including the ACLU, Southern Poverty Law Center and the Trevor Project.

On Inauguration week, for example, the record label Secretly Group launched Our 100 First Days, releasing a new song every day for the first 100 days of the Trump presidency, with the money from the compilation donated to organizations that represent people and causes that felt threatened by the administration’s policies.

In addition to Sharon Van Etten, John Legend, and St. Vincent, “7-inches for Planned Parenthood” includes the music of artists including the Foo Fighters, Mary J. Blige and Sleater-Kinney. Comedian Pete Holmes joins Galifianakis. Stosuy said he is arranging the order of the recordings “to make them feel like collages” or a curated mixtape, “not just … a bunch of songs.”

Though the records are a nod to protest music, not all the songs or artists are pushing an agenda. In an interview with NewsHour, Van Etten said her music is not political, but working on the project is her way to be a part of the resistance. Roberto Lange, who performs as the electro-pop artist Helado Negro, said performing and playing music “is the best way to voice my opinion.”

“I am not the most eloquent speaker,” Lange said. “Music and performance is a form of resistance for me, a form of compassion for people who need this support.”

Participating in the project, Lange said, gives him a chance to stand up for what he believes. He explained that growing up in a Latin American family, some topics were taboo and “girls dont have the chance to find someone to talk to. [Planned Parenthood] is the first place women have been able to go to.”

“Music and performance- that’s a form of resistance for me,” he said.