There are two beginnings to this story.

The first happened more than four decades ago as Najat Abdul Samad, a young girl, stole the newspapers that her family would use to dry raisins on their vineyard in Sweida, Syria. She might get in trouble, but it didn’t matter — she wanted to read the literary columns and dream about what it would be like to be a writer herself.

The second: about 15 years ago, when translator Ghada Alatrash was visiting her family in Sweida, about an hour’s drive from the country’s southern border with Jordan. That’s where she met Samad, who was working as an obstetrician and gynecologist there. The two kept in touch and Alatrash, who lives in Calgary, Canada, began translating Samad’s work from Arabic into English.

Since then, Alatrash’s translations of Samad’s work have been published in the LA Times and Alatrash has discussed them on Public Radio International and Studio 360. Poetic and rich in imagery, Samad’s writing describes the urgency of life in Syria and the struggle of families to maintain stability under the threat of war.

Alatrash, who is a doctoral student in education at the University of Calgary, said their shared pride in being Syrians and their desire to spread this pride in writing brought them together. “Najat writes about the human suffering in Syria, and I see it as my cause and responsibility to amplify her voice and the voices of my Syrian people through translation,” Alatrash said.

We asked Samad several questions via email about writing from Syria, and Alatrash translated her answers along with two new pieces that have never been published in English. You can find more of her work below.

When and why did you begin writing?

I was in the third grade when my father’s friend asked that we help in making raisins. We washed withered grapes with water and potassium, among other materials, and spread them on the pages of old newspapers in the vineyard until they became dry, after soaking the color of the sun and preserving its taste. Our father’s friend praised our vigor in moving the trays of grapes from the water basin to the sunny open space that was lined with newspapers. However, he also complained that they had caught us distracted from work and reading the literary columns in the faded yellow pages of the papers. So, like two thieves, my sister and I would stealthily cut out these pages, fold them and hide them in the pockets of our bag so that we could finish reading them after returning home. We justified our theft to ourselves by the fact that these people had many neglected newspapers while we had nothing to read in the evening.

I recall only spending my allowance on story books despite the temptation of the sucker and cookie. The stories were more delicious.

During our elementary school years, my mother gave us two cents as a school allowance. The two cents were a very small sum of money only welcomed by poor children like ourselves. Two cents could buy a sweet red sucker, a cookie with cream, or a very delicious freshly baked piece of French bread. But one night, we found that the school library was lending story books to students for one night in exchange for two cents! I recall only spending my allowance on story books despite the temptation of the sucker and cookie. The stories were more delicious.

Subconsciously, the ideas were forming in my mind, ones that I wished to express but was not certain would be understood by those around me, and so in elementary school, I began to write them on paper. I wrote stories, plays, poems, thoughts and lyrics for folk ballads. I found myself exhaling deeply after reading what I wrote as if I were releasing a heavy secret that was about to break my back but was now lifted off my shoulders onto paper. And so the pen, paper and I became one soul divided into three different bodies.

During my studies of general medicine, and later during my practice as an ob/gyn, my work consumed me day and night, and my nightly emergency shifts devoured my time and energy. Although I was very content in my medical profession, a terrible heavy weight remained rested on my chest and was not released until the last lines of my first novel “Lands of Exile.”

I write with the hopes that the tyrants read and are ashamed of their extreme ugliness.

I read so that I am healed and I write so that I am healed. Today, while my homeland is covered with the color of blood, I write to bring back greenness back to the trees and height back to the mountains, and I write so that people do not die in subjugation or forget their right to live safely. I write with the hopes that the tyrants read and are ashamed of their extreme ugliness.

Language alone is what preserves my internal peace and mental balance. Language becomes a homeland when the homeland is lost.

Your past writing speaks about effects of war on women. What role does this subject play in your more recent work?

My writings are not solely on women and children. The pain of humans is terrible no matter what sex or age. I write about the insistence of evil men to wage wars and the persistence of women to not surrender to the coming destruction. I write about women’s instinct to survive, to not succumb to an approaching death, but to gouge its eye in order to protect her life and the lives of her children. My writing becomes the instinct of literature to be a voice for life.

What is the importance of writing and poetry in Syria today?

Before I answer this question, I will ask: Do the American people recall the significant role that Harriet Beecher Stowe’s “Uncle Tom’s Cabin” played in the awakening of the collective political awareness in America about the horror of slavery and discrimination between human beings?

I point to this novel as I read it during adolescence. This book was engraved deeply in my conscience in all of its details. It is the novel to which I owe my understanding of human pain regardless of its colors. This book is a great example of how literature can bring humans together in a brotherly bond, reminding them of the necessity to listen and to hold dialogue instead of fighting amongst each other. Literature is what can erase barriers of geography and fear, and reminds us of the need for all people to love.

I would like to ask those who can hear me around the world to understand that the suffering of Syrians is about their threat to existence, and to further imagine our helpless feeling of being isolated and unable to defend ourselves.

Today, we see that the main source of information in relaying the news of the grinding war in Syria to those concerned around the world is through satellite channels. However, not all channels implore the right of humans to a dignified life, whereas the voice of literature — aligned with the human voice — is more reflective and truthful.

I am a Syrian woman and I believe that humanity brings people together on our earth. I believe in the power of the word and in raising it in the face of weapons. I believe in its ability to tell the world of our aspirations in a more amiable manner.

I would like to ask those who can hear me around the world to understand that the suffering of Syrians is about their threat to existence, and to further imagine our helpless feeling of being isolated and unable to defend ourselves. Syrians are first and foremost human beings before being classified as a majority or minority. A Syrian human yearns for a dignified life no less than any other citizen in the Americas, Europe, Africa, and Asia.

It is important to understand that when one’s people are suffering, then all the people on earth are also endangered.

Read two of Samad’s pieces below. You can also listen to audio recordings of Alatrash reading the pieces in English and Samad reading in Arabic. 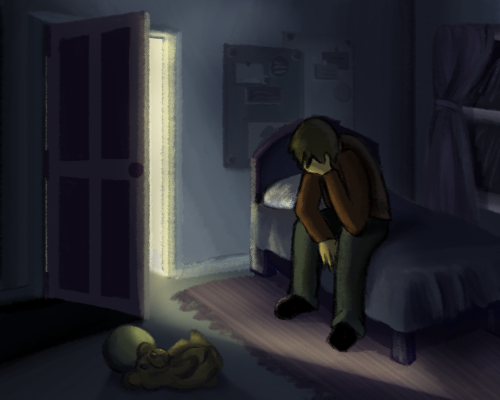 His family was late to come back from the market. He couldn’t believe it when they finally returned. He ran to embrace them. He did not tell them that he was still imagining their dead figures under the shelling. He left them standing dumbfounded in the living room and ran to his room. He fell at the carpet and began to kiss it, kissed his blue six-year-old’s bed, and then passionately embraced his toys, kissing them and screaming: “Please, you, you, and you. Please all of you, do not die.”

“I don’t care about being pro or anti. All I want is for my only brother to find food.”

Wouldn’t it have been better if I had emerged as a wild plant in this soil not belonging to a family, or if I had been a bundle that was accidentally dropped from above by a passing stork onto a peaceful land that did not have someone I was worrying about in all four of its directions?

“I don’t care about being pro or anti. All I want is for my only brother to find food. He is seven years old and is as thin as a shadow, and he has not been able to go to school for a day. My sister is also about to collapse from lack of food. And we, the older daughters, have been displaced, each with her husband in a different country. My mother told me that one kilo of rice where they live in al-Ghouta sells for 5,000 Syrian pounds, and that for months they have been under siege, entrapped without electricity, water, work, or money. If only I could bring them to me. If only I could send them bread and sugar.”

Special thanks to Ghada Alatrash. Explore more of our Syrian Voices series which highlights Syrian artists producing work around the world.