How newspapers reviewed ‘To Kill A Mockingbird’ in 1960

At a time when Jim Crow laws still gripped the U.S. southern states and the civil rights movement was beginning to hit its stride, Harper Lee was quietly developing two books that told the tightly woven culture of racism in the Deep South.

“Go Set a Watchman,” which comes out tomorrow, tells the story of protagonist Scout Finch 20 years after the events of Depression-era “To Kill a Mockingbird.” Published on July 11, 1960 to critical acclaim, “Mockingbird” nabbed a Pulitzer Prize and eventually became an Oscar-winning film.

Wayne Flynt, a friend of Lee, said the book stood out for its nuanced take on “the innocence of childhood and about the corruption of most of the institutions that were important like the church, the courts, the school.”

In acknowledging those institutions’ flaws at the time, “Mockingbird” risked alienating many readers, especially those in the South. The Mobile Press-Register called “Mockingbird” a “wonderfully absorbing story,” while acknowledging that the novel “will come under some fire in the Deep South.”

When “Mockingbird” was published, several of the most inciting moments of the civil rights movement had yet to occur; white supremacists had yet to kill four girls in a church bombing in Birmingham, Alabama, and the police brutality against the voting rights marchers of Selma, Alabama had yet to be televised. Months before Martin Luther King, Jr. gave his “I Have a Dream” speech on the steps of the Lincoln Memorial, Gregory Peck gave his acceptance speech for his portrayal of Southern lawyer and moral compass Atticus Finch.

But the Register noted the book’s strong portrayal of a variety of characters in small Southern towns, saying:

“It seems to us, however, that the South can well afford to have more such writers and books … chronicling little bits of ordinary life, and saying sympathetically as this writer seems to us to say so plainly that — small towns everywhere, North and South, are made up of many ordinary people; some mighty peculiar ones; a small minority who are worthless and even dangerous, and a scattering, happily of outstanding good and even great persons.”

Other reviewers in Alabama were effusive in their praise for Lee’s coming-of-age tale. Angela Levins of the Alabama Media Group dug up some of the 1960 reviews for “Mockingbird” among Alabama’s newspapers. The Birmingham News said the novel “assures the author a place well up front among American writers … it’s down-to-earth, believable.” 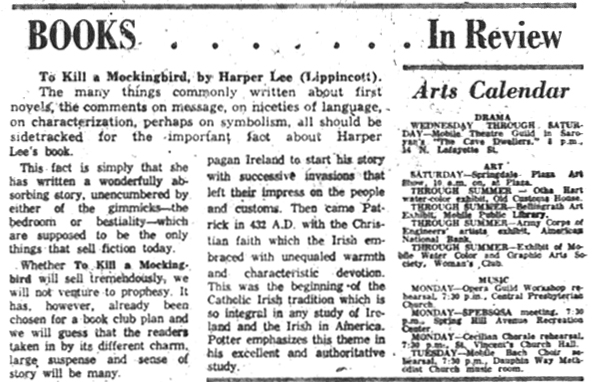 July 1960 review of “To Kill a Mockingbird” in The Mobile Press-Register. Image courtesy of the Alabama Media Group

On a national scale, reviewers extended the praise. Richard Sullivan of the Chicago Sunday Tribune said Lee’s book was a “first novel of such rare excellence.”

“This is in no way a sociological novel. It underlines no cause. It answers no programs,” he said in a July 1960 review. “Casually, on the side, as it were, ‘To Kill a Mockingbird’ is a novel of strong contemporary national significance. As such it deserves serious consideration. But first of all it is a story so admirably done that it must be called both honorable and engrossing.”

In its August 1960 review, Time magazine said “the novel is an account of an awakening to good and evil.”

“Novelist Lee’s prose has an edge that cuts through cant, and she teaches the reader an astonishing number of useful truths about little girls and about Southern life,” Time wrote.

George McMichael of the San Francisco Chronicle said in his July 1960 review that “Mockingbird” was a “moving plea for tolerance,” despite some occasional melodramatic moments.

“Best of all, Harper Lee has wisely and effectively employed the piercing accuracy of a child’s unalloyed vision of the adult world, to display the workings of a tragedy-laden region that little understands itself—or rarely seeks to,” McMichael wrote. 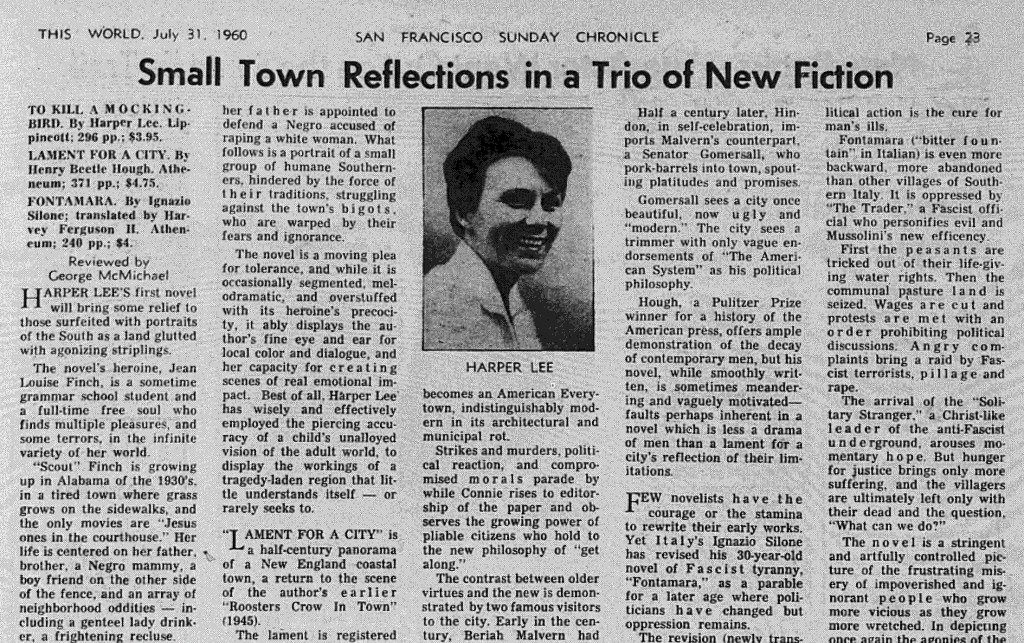 July 1960 review of “To Kill a Mockingbird” in San Francisco Sunday Chronicle. Image courtesy of Library of Congress

Amid the novel’s continued success, Lee receded from the scrutiny of the public eye. She gave her last full interview in 1964, the same year President Lyndon B. Johnson signed the Civil Rights Act, the landmark piece of legislation that outlawed discrimination on the basis of race, sex, religion and national origin.

“I would like to be the chronicler of something that I think is going down the drain very swiftly. And that is small town middle-class southern life,” Lee told Roy Newquist of the New York radio station WQXR. “There is something universal in it. There’s something decent to be said for it and there’s something to lament when it goes, in its passing.”

More than half a century later, Lee, now 89, has largely remained out of the limelight. Since a stroke in 2007, Lee is nearly deaf and blind and has been confined to assisted living in her hometown, Monroeville, Alabama. Lee also lost her sister Alice, who acted as protector for her younger sister, in 2014.

Lee has left much of the press handling to Wayne Flynt, a retired Auburn University history professor who accepted Lee’s induction into the Fellowship of Southern Writers on her behalf in 2011. Flynt described their relationship as “late-life friends” and visits her once a month.

Flynt did not know Lee when “Mockingbird” was published, but the book held a mirror to his experiences at the time, including the fact that his church voted to not admit blacks, which Flynt said was a heartbreaking blow for him. When he also learned that the 16th Street Baptist Church in Birmingham, Alabama, had been bombed, he resolved never to go back to Alabama. 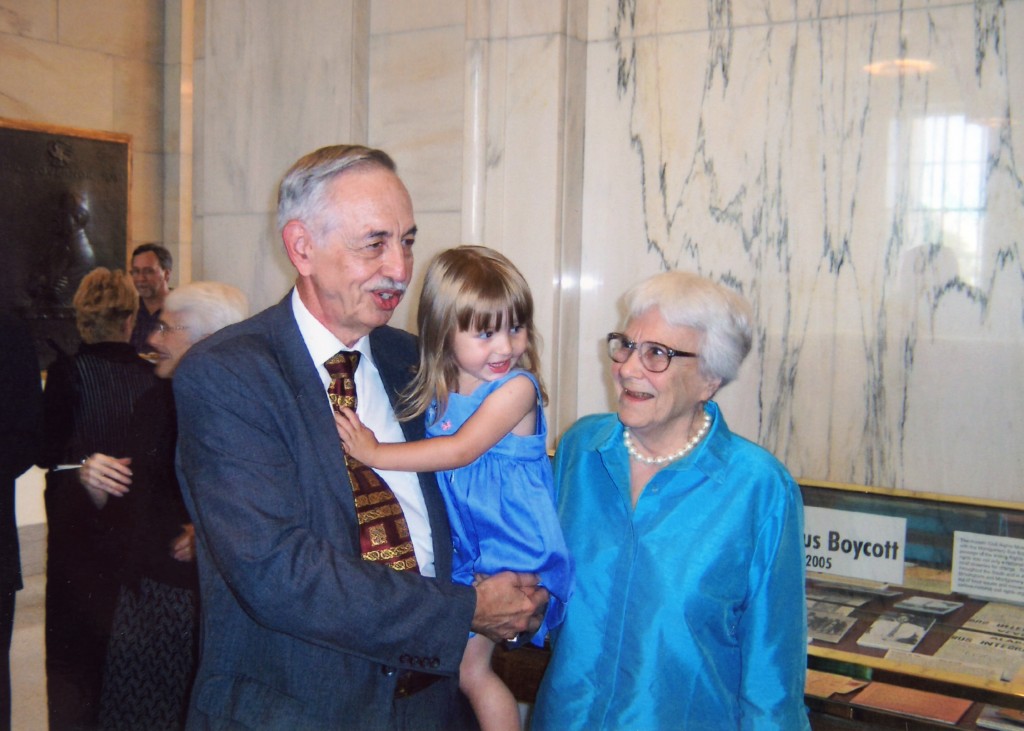 “I knew all the characters in the book, and I could put names and faces on virtually everyone, the mean ones and the good ones and the black ones and the white ones, and I thought, ‘Well, it’s worth a try,’” Flynt said.

Flynt has been in Alabama ever since. “Thanks largely to Harper Lee,” he said.

But parts of the black community did not rush to read “Mockingbird,” according to sources who appeared in Mary Murphy’s documentary “Harper Lee: Hey, Boo,” for PBS’ “American Masters” series.

Mary Tucker, a Monroeville resident, said that although she read her copy of “Mockingbird” as soon as it came out, “not a lot of black people read the book.”

“There was too much horror around me at the time for me to absorb more,” civil rights leader Andrew Young said in the documentary. “We were aware of the harshness and brutality of segregation.”

Flynt said he and many others initially thought “the book was really about race.”

“As time went by, I think the book transcended race,” Flynt said, adding that he had asked Lee the very question that many critics, columnists, essayists and civil rights leaders have debated over several decades: What is the book about?

“‘Oh, you know what the book’s about,'” Flynt said he remembers Lee telling him. Flynt said Lee then asked him the same question.

Left: August 1960 review of "To Kill a Mockingbird" in Time magazine. Image courtesy of Library of Congress